Are you a Jew? Do you know any Jews? I was raised in Reconstruction Judaism (which is basically like being a Unitarian) so as far as I’m concerned, the most important part of any Jewish holiday is the food. This goes double for Rosh Hashanah. Unlike most Jewish holidays, where we’re eating because some group tried to enslave us and we survived, Rosh Hashanah is the celebration of everything that is warm and fuzzy about the fall and New Year! Apples and honey! Togetherness! Wine! Yummy food!

Whether you’re hosting or attending a Rosh Hashanah dinner, nothing brings together a (non-kosher or meat free) meal like a sweet, cinnamony, lokshen kugel (noodle casserole). Noodle kugel is one of those dishes that sounds/looks questionable but tastes amazing. Like escargot. If you have a Jewish girlfriend, I’m pretty sure cooking her one noodle kugel is equivalent to four other meals or three-point-five back rubs. Even if you’re not Jewish/not attending a Rosh Hashanah dinner, noodle kugel is a delicious and comforting fall dish. So, in the spirit of the Holiday, I give you my favorite lokshen kugel recipe– duh, my moms! 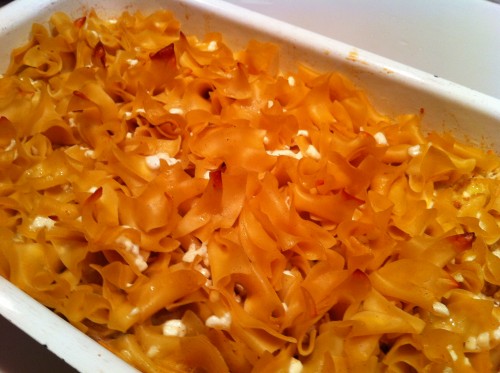 1. Start by putting water on to boil, preheating the oven to 350 degrees, and buttering the 9×13 baking pan.
2. Cook the noodles until al dente (you can continue while they’re boiling).
3. Add eggs to the mixing bowl one at a time to ensure that none are gross/get any shell in it. I usually crack them in to a small bowl and then add from the small bowl in to a large bowl so a gross egg won’t ruin your good eggs. I mean, c’mon– getting eight perfect no-shell eggs? Unlikely.
4. Add in the vanilla and cinnamon. If it seems like it needs more cinnamon, add some more. No need to be cheap with the cinnamon.
5. Beat together the eggs, vanilla and cinnamon using your mixture/whisk/fork.
6. Drain the noodles and rinse with cold water. Be gentle. They’ll be really hot and probably hurt your hands. Sorry.
7. Gently fold the noodles in to the egg mixture. I’m not sure what “folding noodles in” means, but this is what my mom always says to do.
8. Add in the cottage cheese and mix all together carefully.
9. Pour cheesy delicious egg/noodle mixture in to your buttered pan.
10. Dot the top with butter (about 2 tsp dots all over)
11. Bake for 25-30 minutes or until the kugel is set and the top starts to brown. If it’s done, it shouldn’t look too gooey when you take it out and shake it a bit. It will set more as it cools. Beware of over cooking as overcooked, dry kugel is gross.

Optional Variations
**Note: My mom doesn’t do any of these, so, you know.**
+Topping. Instead of dotting the top of the kugle with butter, you can cover it with your favorite crumbly pie topping. I’ve seen chopped pecans, cornflakes, bread crumbs and brown sugar cut with butter.
+Raisins. If you like raisins and won’t be offended when everyone picks them out, you can stir in a half cup of raisins when you add the noodles.
+Apple. Much like the raisins, you can peel and chop up two large apples in to small cubes and stir them in with the noddles.
+Other Dairy. You can half the cottage cheese and substitute in a cup of sour cream or cream cheese. I have no idea why you would want to do this.
+Non-Dairy. For the vegan/kosher, a non-dairy kugel is probably your best friend. I’ve seen recipes that call for margarine instead of cottage cheese– this sounds kind of iffy. I think you’re best bet is a mixture of vegan cream cheese and vegan sour cream. Alternatively, you could investigate a vegan cottage cheese recipe. 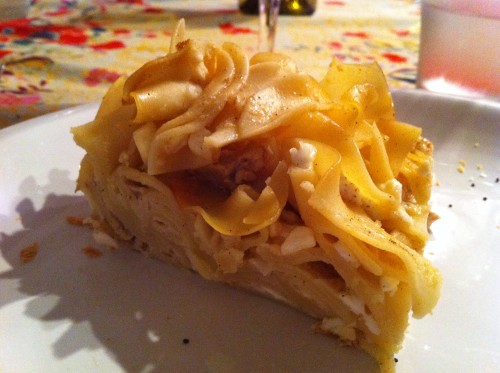