I’m OBSESSED with this comic anthology i’m going to be talking about today and I haven’t even read it yet. Like, I can’t believe how lucky we are that we exist in a universe where this anthology is being put together and released. If you know me, you know four things about me: I’m a Latina, I’m queer, I’m a witch and I love comics. So as soon as I could I backed the Kickstarter for the all new comics anthology Power & Magic, put out by Power & Magic Press. THIS ANTHOLOGY IS 170 PAGES OF COMICS ABOUT QUEER WITCHES OF COLOR BY WOMEN, BIGENDER PEOPLE AND DEMIGIRLS OF COLOR. Is that not the greatest thing you’ve ever heard? 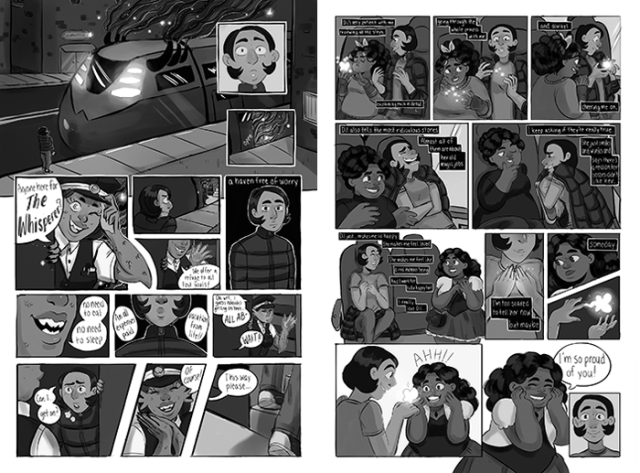 From “The Whisperer’s Trian” by Arianne Hokoki.

I mean, come on, look at this official synopsis.

Magic, wisdom, community, and misbehavior. For many people around the world, the witch is a symbol of feminine strength and complexity. Power & Magic collects fifteen original comics about queer witches of color as they master their abilities, discover their traditions, and navigate love as beings with incredible power. Featuring the work of seventeen women, demigirls, and bigender creators of color, this queer witch comics anthology is as rich an experience as womanhood itself. 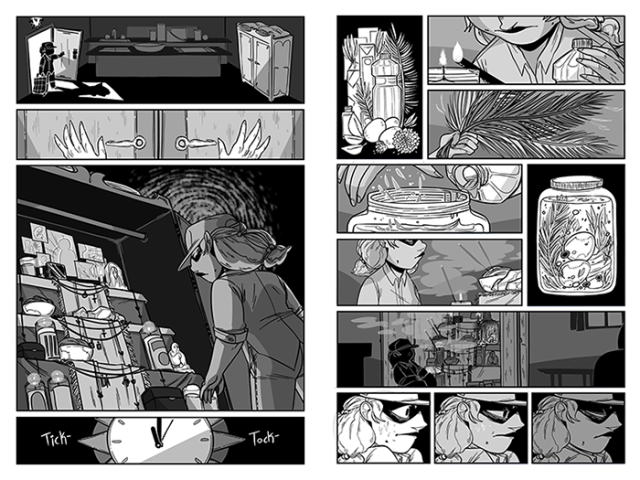 I’m so absolutely excited for this, have I said that yet? And so I want to know everything I can about this. In order to find out more, I talked with Editor Joamette Gil.

Mey: Why specifically queer witches of color? What is it about that intersection of identities that made you want to collect these stories?

Joamette: The witch as an archetype is very near and dear to me. I remember dabbling in Wicca as a high schooler. The more I learned about the Wiccan philosophy of will and taking matters into your own hands, the more I realized that that was how my Afro-Cuban mother had raised me all along. She practices Santeria, a syncretic Afro-Cuban religion that involves a great deal of community practice, ritual, sacrifice, and connection to the elements. “Ashe” (the creative potential and will inside all living things) was a very important concept in my house; if your ashe was strong, there was no excuse for half measures or fear. There was a power inside you that would carry you through anything.

Witches were persecuted for centuries for having the audacity to have knowledge, power, and influence in a white Christian male-dominated world. Similarly, the spiritual practices of people of color, which often fall far outside of Abrahamic tradition, flounder between being disrespected and being appropriated on a daily basis. POWER & MAGIC isn’t necessarily about that, nor about teaching the audience about different spiritual or magical traditions around the world. It’s not educational nor does it specifically address white people in any way, shape, or form. It’s a collection of voices that are so often ignored in the comics industry, voices whose existence among us can only be accounted for by the sheer power and magic it takes to be a witch. 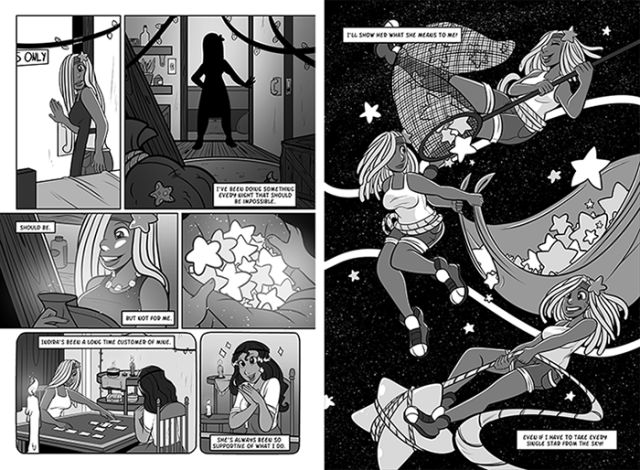 From “Capture the Stars” by Vexingly Yours.

M: Why did you decide to center this collection on womanhood?

J: The stories themselves aren’t so much centered on the concept of womanhood as they are on being a powerful queer woman, demigirl, bigender person, etc. The difference I see is that these stories take the characters’ genders and orientations for granted: they all happen to be those things while dealing with different facets of power in their lives, whether it’s their own power or powers outside themselves. The collection definitely is centered on womanhood in the sense that only creators who consider womanhood as some part of their gender identity (whether singularly or demi- or bi- or genderfluid) were allowed to participate. I set that limitation simply because I have yet to see an all-woman comics anthology centering people of color! Hell, I rarely see any mainstream comics with any women of color behind them. I wanted to go 0 to 60 in 2 seconds, haha.

M: What do you hope queer readers of color will get out of this book?

J: More than anything, I hope queer readers of color walk away with that slightly breathless feeling that happens after finishing a great story. I want that to occur without the awful heart-sinking anxiety that wells in your chest when you realize no one in the story looks or loves like you do (again). Totally projecting myself into this answer, but I can’t imagine I’m the only one who gets that way.

J: My favorite thing about magic is that it’s whatever you want it to be! Whether that’s potions or tarot or singing or writing. Whatever rituals we live by that make us feel ready and strong as we face each day — that’s magic. Taking hold of our lives and spaces in order to shape them into what we will them to be — that’s magic. Protestors chanting is an incantation. Each technological and medical revelation is alchemy mastered. Perseverance and love alter everything around us.

The Kickstarter campaign lasts until October 7th, so make sure to head on over and support this amazing project today!

Also, please remember to vote in the Autostraddle Comic Awards! There’s less than a week left to choose your favorites!

Gamora Guardian of the Galaxy TP