Fresh off their four Autostraddle Comic and Sequential Art Awards, Lumberjanes is back and just as great as ever. This comic is seriously on such a great roll right now. Issue #6 starts off with the campers going about their daily business just shortly after dealing with a camp-wide dinosaur attack.  Now that the whole camp is dealing with the weirdness that up till now only the main girls previously have been, you might think that the camp would be on lockdown or something, and that’s definitely what Jen thinks. But no, instead they’re playing the coolest looking game of capture the flag I’ve ever seen. 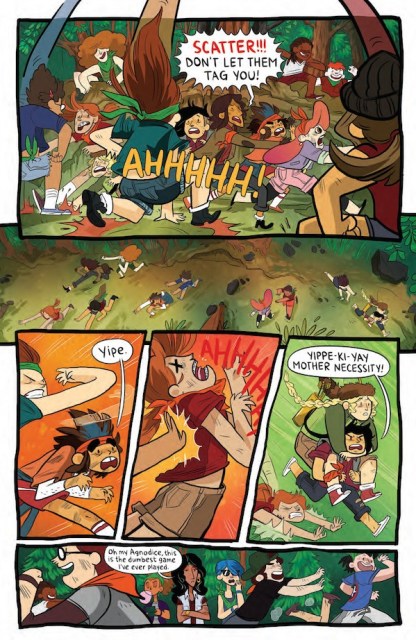 It’s nice to see the Roanoke Cabin Girls being able to show off their legendary teamwork and friendship-to-the-max skills in a situation that doesn’t involve yetis, river monsters or underground caves. Instead they just get to have some fun and work together when the stakes aren’t so high. And come on, “Yippe-ki-yay Mother Necessity”? That’s just a killer line. Unfortunately, things aren’t all fun and games for the whole issue, as Diane takes the game too far, and uses the golden eye she picked up in the last issue to magic around and cause some real trouble.

By the way, what the heck is going on with Diane? Is she possessed? Has she always been a secret mythical ancient being? Why is she saying the golden bow that the girls found is hers? What was she talking about to Jo? Why is she bringing up Apollo? I just want to know all the answers so bad! 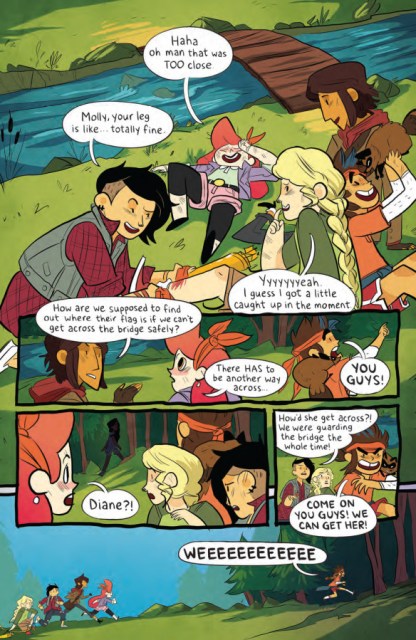 Another main plot line of this issue is Jo trying to figure out what the Bearwoman was accusing her of and why all the magic stuff seems to be going after her. I feel so bad for Jo. She’s not Ripley, or even April, who would probably have a lot of fun being the center of all the weird magical going ons. You can tell she just wanted to have a much more normal, but still fun, summer with her friends. Unfortunately, first the Bearwoman, and now Diane seem to think that she’s somehow deeply involved with all the magic stuff that’s going on.

The facial expressions that Brooke A. Allen draws in this issue are just flat-out amazing. They’re just so perfect and get across exactly what the characters are saying. I’m straight up in love with the way she draws these characters. I think that Ripley might be tied with Kamala Kahn for my favorite-drawn character in all of comics right now. And again, in this issue we get to see an even wider variety of girls at the camp. It’s terrific being able to see so many awesome character designs for so many different and unique girls. 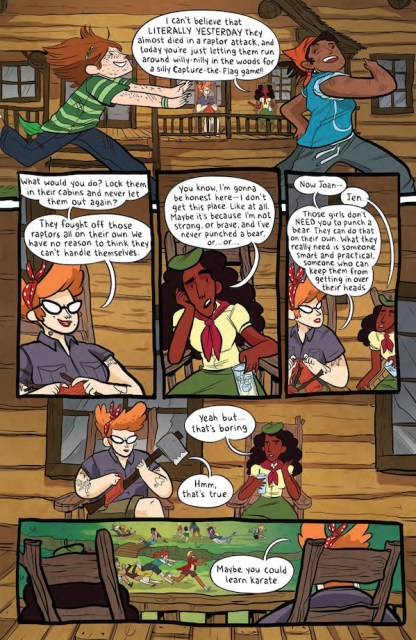 Jen is so freakin’ cool on the last page of this issue. Earlier in the comic we saw her talking to Rosie about how she feels like the camp is out of control and she just doesn’t get it. Previously, she’s been filling the authority figure role, the person who doesn’t want them to have fun or go on adventures, but it’s always been out of love. And here, she feels like she doesn’t belong. The rest of the camp, including the camp director, definitely seem like they’re squarely on the pro-adventure side of things. Then on the last page, just when it looks like Jen is one more time going to get in the girls’ way, she instead strikes a heroic pose and announces that this time, she’s in.

There are only two more issues in this arc, so things are really starting to amp up. According to co-writer Noelle Stevenson on tumblr, after issue #8, there’s going to be an anthology issue featuring contributors like Faith Erin Hicks and Emily Carroll. After that, the comic will pick back up with the regular creative team for a new arc. When Lumberjanes was first announced, it was going to be a limited series, ending after this 8-issue run, but boy am I glad that it got picked up to a full series so we can keep on enjoying everything this book has to offer. Also, these mixtapes at the end of the comic are just consistently straight up killing it. This week’s mixtape is brought to us by April and “her pal” Jenny Owen Youngs. The playlists are such a genius idea and wonderful addition to each issue.

Also, there’s only one page left of the absurdly good webcomic Nimona by Lumberjanes co-writer Noelle Stevenson, so if you aren’t already following it, please do so.