Oh gosh, so sorry review is coming late! I normally would’ve put this review up two weeks ago, but, you know how life gets sometimes, right? Anyway, here’s your review of Lumberjanes #10 a bit late, but just as enthusiastic as ever. 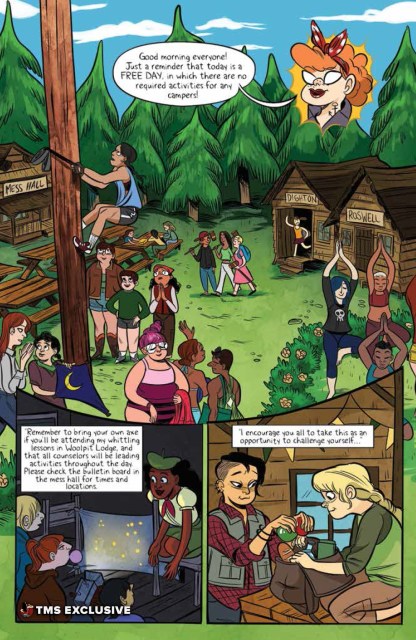 Art by Carolyn Nowak via The Mary Sue

Things are finally settling down for the campers from Roanoke Cabin. It’s a free day, there are no more ancient deities running around and everything looks like you’d expect a summer camp to look. Mal and Molly have decided to go off on a picnic-that’s-really-a-date and finally get some alone time. Molly’s afraid that their time at camp will be ending too soon, and Mal’s excited to see her friends again. They’re super cute together, with Molly hanging on every word out of Mal’s mouth and Mal being pretty oblivious about it. But as soon as Molly springs into troublemaking mode, Mal can’t help but have eyes only for her.

Meanwhile, back at the main part of the camp, writers Noelle Stevenson and Grace Ellis really stretched their punning wings. April, Jo and Ripley have decided to try and kill their free time by going through the scout handbook (you should also check out what book April’s reading) trying to earn as many “normal” badges as they can. There’s “Knot If I Can Help It” (knot tying), “Go Ball-Istic” (ballroom dancing), “Get Your Bed In The Game” (making your bed), “Absence Makes The Heart Grow Fondant” (cake decorating) and more. But no matter how clever the wordplay, these badges just don’t compare to stopping a Greek Goddess bent on taking over the world.

Mal and Molly’s romantic little picnic-that’s-really-a-date is interrupted when they see the Bearwoman sneaking around the forest and decide to follow her until she disappears into the very same outhouse that the original raptors came out of. Remember issue #5, when there were the dinosaurs? Remember how great that was? Well, this issue has more! Being the curious campers they are, Mal and Molly step into the outhouse and fall through a portal that ends with them blushing and lying on top of each other in a prehistoric world. Molly even does her best Ellie Sattler, checking out the “weird plant action” right before an actual dinosaur shows up. Anyway, long story short, the Bearwoman helps Mal and Molly escape from a pack of T-Rexes (they do move in herds) and tells them that they’re “not goin’ home for a long, long time.” 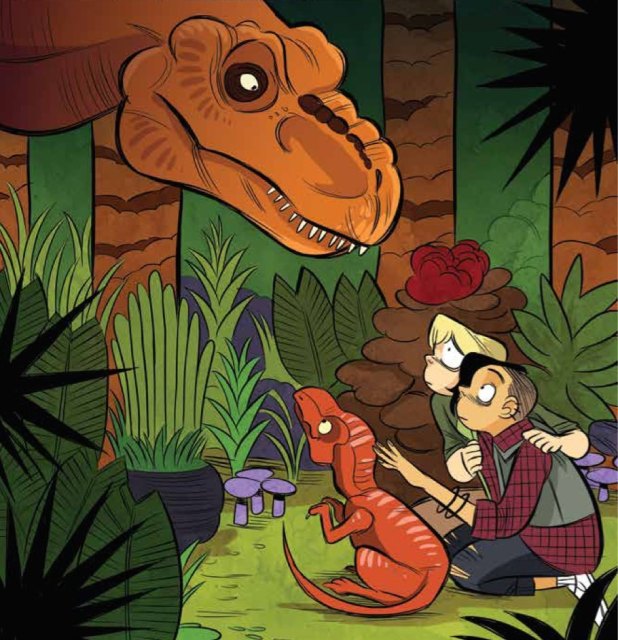 It’ll be really, really interesting to see how the dynamic of the book changes with the girls split up like this. We’re so used to seeing how they team up and work with each other and off each other’s talents and individual skills, what will they do now that they’re not all together? What if there’s another epic problem that only the Lumberjanes can solve? With their group split into two, will they still be able to achieve Friendship to the Max? This is a really, really brilliant move by the Lumberjanes creative team, making sure that the second volume will still have all the heart and soul of the first, but will be fresh and different and new.

Something that you’ve probably noticed is that the art in this issue is different. That’s because normal artist Brooke A. Allen is taking a break for a few issues and the super talented Carolyn Nowak is filling in, with Maarta Laiho on colors. The last issue, with its number of guest artists, was a really nice buffer to prepare us for this change in art styles, and it’s actually kind of fun to see an entire issue with a different artist’s take on the characters we’ve been getting to know. Nowak’s art is lighter and softer than Allen’s; it’s more of a chiffon to Allen’s crushed velvet. Plus, as a bonus, this issue contains a special preview of the upcoming comic Giant Days, written by John Allison and illustrated by Lissa Trieman. 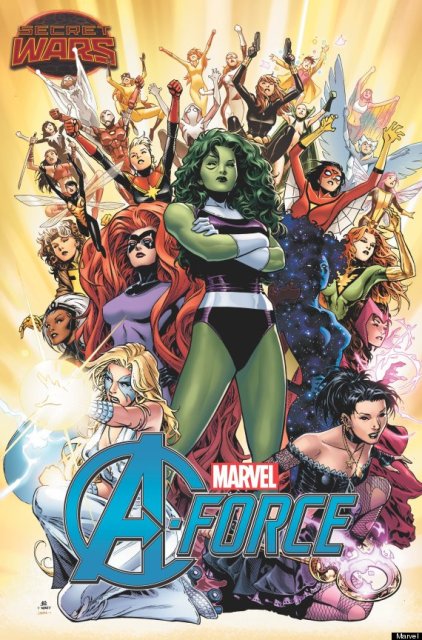 Also in big comic news, both DC and Marvel announced some pretty cool news this weekend. DC announced that this summer, after their Convergence event, they’ll be launching a bunch of new titles and new creative teams. Some of the highlights include a Harley Quinn/Power Girl limited series by the writers of Harley Quinn, Ming Doyle on Constantine: The Hellblazer and Dark Universe, and what I’m looking forward to the most, a Black Canary solo title written by Brenden Fletcher and drawn by Annie Wu. I’m definitely adding that to my pull list. On Marvel’s side, they announced that Ms. Marvel writer G. Willow Wilson and Marguerite Bennett will team up to write A-Force, an all-female Avengers team that will include heroes like Dazzler, She-Hulk, Medusa and Runaways hero Nico Minoru(!).