DC Comics Bombshells started out as a series of pinup posters and toys, which might seem like a strange place for one of the most feminist comics being published by DC to start out. But as soon as writer Marguerite Bennett got her magic hands on it, all rules went out the window. She and her team of artists have created what’s probably my favorite alternate-universe DC story ever. 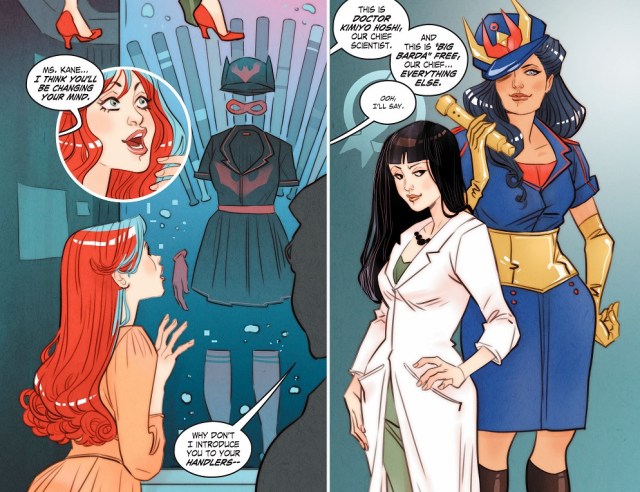 Bombshells is split into several different stories that each come out as a Digital First issue on Comixology, and then are collected in physical comics in groups of three. So far, we’ve got stories about Batwoman, Wonder Woman, Star Girl and Supergirl, Zatanna Harley Quinn, and the newest installation, which is about a group of Batgirls inspired by Batwoman. Others like Amanda Waller, Mera, Catwoman, Big Barda, Poison Ivy and Huntress — as the singer in a swing band, no less — have also shown up. All of this is set during an alternate history World War II. Bennett also pointed out that each hero’s story is told in a different style. “So for Batwoman it’s this pulpy, radio adventure serial; for Wonder Woman it’s a war story; for Supergirl it’s a propaganda film; for Harley Quinn it’s Charlie Chaplin-esque farce; for Zatanna it’s a hammer film.” What makes it truly great is that Bennett has succeeded so well in telling each kind of story.

In this universe there isn’t a Batman; when young Bruce Wayne and his parents are cornered in a dark alley by the man who would create Batman, the heroic lesbian baseball player/vigilante Batwoman rescues them instead. In fact, there doesn’t appear to really be any presence of male superheroes. While some characters like Steve Trevor, Lex Luther and John Constantine are there supporting the women who star in the stories they feature in, this is definitely a universe where female heroes have taken the lead. It’s really great to see characters like Batwoman, Supergirl and Mera existing on their own without being inspired by male heroes like Batman, Superman or Aquaman. Here it’s the women who are inspiring other women. 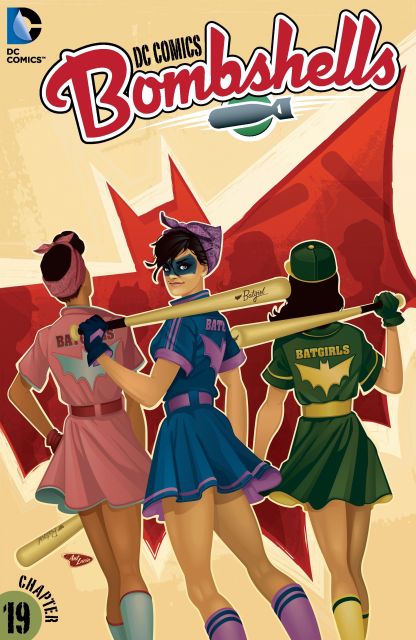 Chapter #19 is my probably my favorite so far. It’s about a group of girls who are inspired by Batwoman to put on their own masks and pick up their own bats and bring justice to their part of Brooklyn. This isn’t their first appearance, though; back in chapter 7, Harper Row helped out Batwoman, earning an autograph and bat. An excited Harper headed back to her friend Kathy Duquesne’s mechanic shop to tell Kathy and their other friend Nell Little that she has an idea. In this chapter, we see that idea coming to life as the three girls go around their neighborhood in Gotham righting wrongs. When Harper wants to break her brother out of an orpanage, they turn to Kathy’s friend, a young Alysia Yeoh, who agrees to help as long as she can join the group and get a costume. The comic is way more adorable than any superhero comic has the right to be.

Writer Marguerite Bennett, as usual, is terrific on this book, making it exciting when it needs to be exciting, sexy when it needs to be sexy and hilarious when it needs to be hilarious. She seamlessly moves between stories, making the Harley Quinn sections light and funny, the Zatanna sections dark and funny, the Wonder Woman sections epic and dramatic and so on. By adding Yeoh to this book, she also becomes one of the very few writers to write multiple trans characters in comics (the only other one I can think of Kieron Gillen, with Cassandra in The Wicked + The Divine and Sera in the Angela comics), as she’s also the writer on the absolutely brilliant Angela: Queen of Hel and other Angela comics. 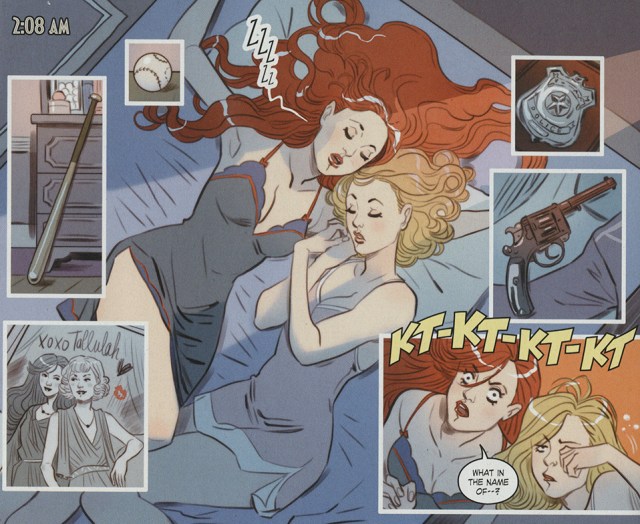 The book is also stunningly queer. First of all we have Batwoman (Kate Kane), who’s one of the main characters. In the very first issue of the series, we see her relationship with GCPD Detective Maggie Sawyer and for much of the rest of her story, she’s narrating as if she’s writing letters to Maggie back home. There’s also the previously mentioned Alysia Yeoh, who gets to spread her wings and become a masked hero (with a terrifically cute costume) in this book. Another story focuses on Harley Quinn, who meets up with Poison Ivy and immediately starts flirting. And of course, there are all the women who are very clearly attracted to Kate Kane and constantly let her know.

The fashion in this comic is absolutely fabulous. It’s a great mix of classic pin-up style with superhero costumes and 40’s era fashion. Another fun thing about this comic is that different stories feature art by different people. Marguerite Sauvage, Laura Braga, Bilquis Evely, Ming Doyle and Mirka Andolfo have all done multiple chapters, while Stephen Mooney, Ted Naifeh, Garry Brown, Sandy Jarrell and M.L. Sanapo have each done one chapter. Wendy Broome has also done colors for several of the chapters. 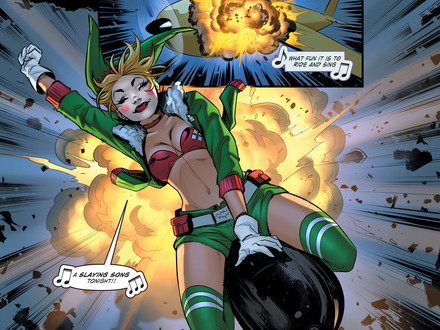 Bombshells is one of my absolute favorite comics out there today, and it’s a perfect example of how exciting, fun and creative superhero comics can be, and it’s no coincidence that that’s largely due to it’s female stars. It’s the kind of comic that makes me hopeful for the future, and present, of mainstream comics. I’m not going to pretend that things are super great for women or queer people, or queer women, in comics, but things are definitely better than they were a few years ago, and Bombshells is a perfect example of that. Don’t let its historical setting fool you; this book is giving us a preview of what the future can be for female characters’ roles in superhero comics.