I haven’t talked about Lumberjanes in a while, and I’m really sorry about that. While I’ve been busy writing about the Autostraddle Comic Awards and what comics you should buy for the holidays, an entire LJ storyline happened! In fact, that entire storyline saw the introduction of new Lumberjanes co-writer Kat Leyh, from the super wonderful Supercakes comics. I’m really excited to talk about this comic again, so let’s dive right in! 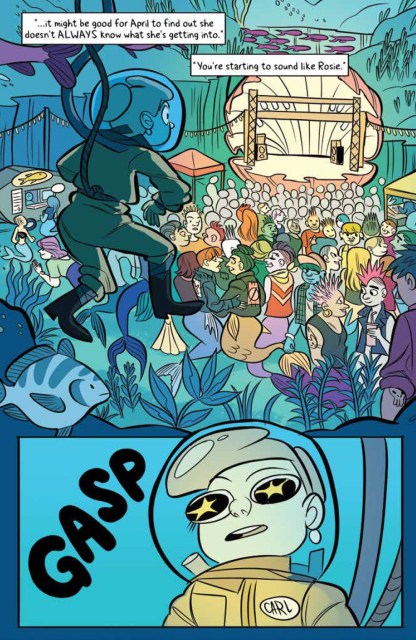 Check out all those cool Merpunks! Art by Carolyn Nowak and colors by Maarta Laiho.

The first storyline focuses on April trying to help a mermaid that she met reunite with her friend and ex-bandmate. There were a lot of great laughs and cool looking punk rock mermaids and tons of artist Carolyn Nowak’s sometimes-exaggerated and always fun style. Colorist Maarta Laiho also did a really great job of distinguishing the parts of the comic that took place above the lake from the parts that took place below, which she washed in beautiful blues and greens.

One of the other cool things that happened in these issues was that we got to see April grow and learn. She’s really gung ho about helping out the mermaids, so much so that in trying to help them she puts her Lumberjanes friends in the rear view mirror. The girls, and especially Ripley, have been looking forward to going to the Bandicoot Bacchanal, but because April is so deadset on helping the mermaids get their band back together, it’s looking like they’re going to miss it. In the end, her friends have to stand up to her and tell her that, while they love her spirit and how she always gives whatever she’s interested in her 100%, sometimes she can be a little headstrong and leave her friends behind. It’s a good lesson and one that’s handled well. 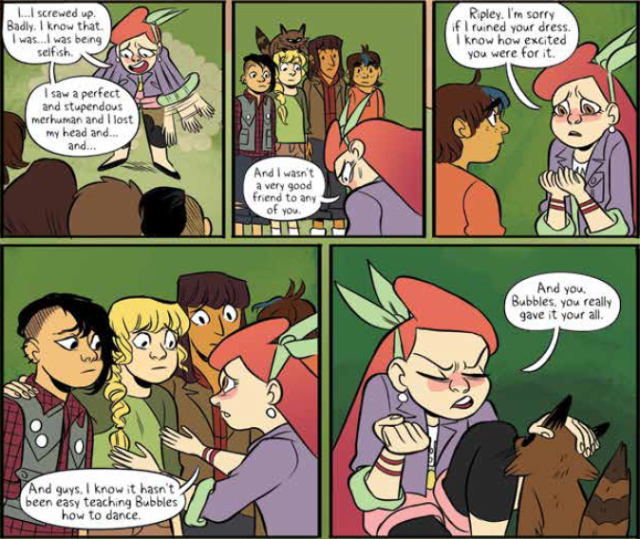 Art by Carolyn Nowak and colors by Maarta Laiho.

I’m not gonna lie, all this talk about merwomyn and riot grrrls and a music festival that reminded me of real life festivals that exclude Girls Like Me made me more than a little nervous. As a trans woman, there are a bunch of words that are used by queer groups, women’s groups and feminist groups that I have to constantly be on the lookout for because they’re so often used to mean that trans women aren’t really welcome there. Unfortunately, some of those words and phrases include “womyn,” “riot grrrl” and “women’s festival,” which were all big themes in this storylines. It especially worried me because Jo, a trans girl, was there listening to April and mermaid Harlow talk about how cool the “merwomyn” and their “MerFest” were, while I was afraid that she wouldn’t be invited to go hang out with the merwomyn with the rest of her friends. So I was extremely happy to see when, in Issue #20, Harlow is trying to apologize to Taylor and Taylor says “You let me down, Harlow… and you keep using “merwomyn,” which is a super harmful movement.” I’m really glad that the Lumberjanes team stepped up and talked about how a lot of groups that consider themselves queer or women or feminist friendly use some really exclusionary and oppressive language. 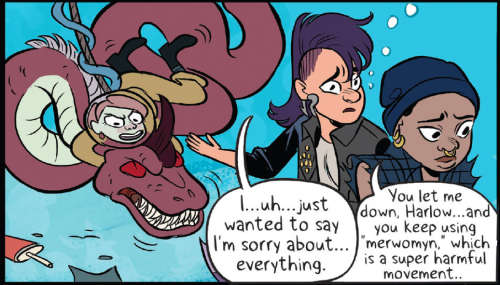 Art by Carolyn Nowak and colors by Maarta Laiho.

With Issue #21, we saw the beginning of a new storyline and the introduction of a new artist, the wonderful Carey Pietsch, who you might remember from her terrific comics about witches and magic. This issue was straight up wonderful. It’s always nice to see a new artist offer their take on the girls, and Pietsch’s Lumberjanes are delightful and adorable. We also get to meet a cool new character, a big, buff, nautical expert who works at the camp and also happens to be a werewolf. I can’t wait to read more about her and the selkies who say that she stole one of their pelts. 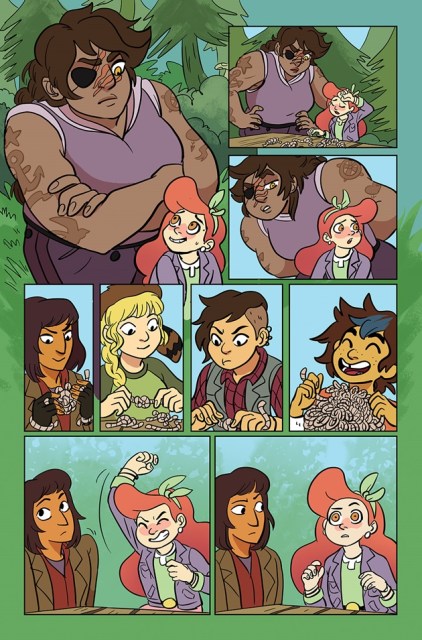 Look at how totally cute and fun Carey Pietsch’s art is!

After Noelle Stevenson left, making her the second series co-writer to leave (after Grace Ellis), I think some fans were worried that the series might lose some of its magic. But, especially with Issues #20 and #21, I feel like Leyh is really hitting her stride. And the book will always have really great colors as long as Laiho is doing them and really, really great lettering as long as Aubrey Aiese is on the book. Plus, co-creator Shannon Watters is still adding her touch. So if you stepped away from the book, I’d really suggest picking it back up. April, Jo, Mal, Molly, Ripley and Jen are just as awesome as ever.