There’s a calming, truthful kind of magic that’s present in a lot of Austin native Tillie Walden’s comics. She’s able to use muted colors and understated details in the faces and bodies of her characters that really get to the heart of the emotion that’s going on in her story. This style is a perfect fit for a graphic memoir, which is one of the many reasons I’m incredibly excited to announce and preview art from her upcoming memoir Spinning, about figure skating, being a teen girl and figuring out who you are.

According to First Second, the book’s publisher, “Spinning is a graphic memoir tracing her journey through the twisted, insular world of competitive figure skating. With the rink as the backdrop for her childhood and teen years, she battles bullies, skaters, and coaches. Trying to cope with her sexuality, her identity, the world around her and the trauma of growing up, she loses herself on the ice, and must find a way out.” 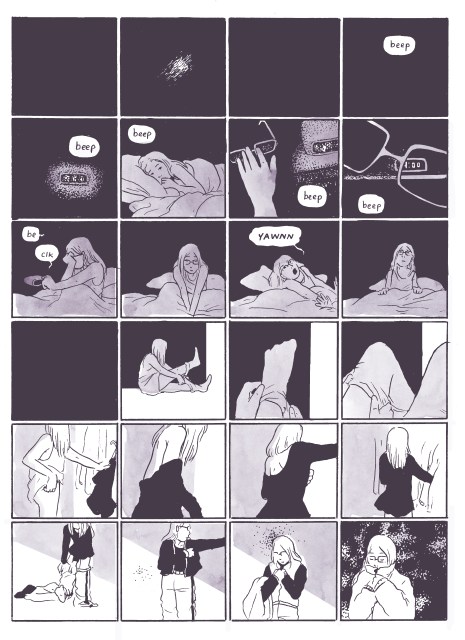 Walden’s work is visually and emotionally breathtaking. If you take a look at her shorter comics, like “You and Me,” “Don’t Forget” or “Find Me,” you’ll notice right away that there’s an immense deepness to them. She can send a huge message about hope and love or fear and uncertainty with simple inks and watercolors. They grab by the heart with one hand and by the memory with the other and hold tight until you feel both with all your might. There’s so much emotion and evocation in each of her comics; they’re like a beautiful song that’s attached to a specific memory in your life, you can’t help but well up when you come across them.

In order to get you even more excited for this upcoming graphic novel, I interviewed Walden about the book and her hopes for it.

Mey: This is your third book, but the first one that’s a memoir. How did writing about your own life feel different than your other books? How do you hope people will react to your personal story?

Walden: It was a really different process for me. I had to take a lot more time on this one then my previous books because making story decisions was so difficult. Normally when I’m writing a story I can imagine key moments and then simply link them together. But for this book I couldn’t do that. Every scene is one that actually took place in my life, so deciding what’s important and what isn’t was very difficult. So to write the whole book, I had to basically regurgitate every memory I could, then order them, then cut them down.

My hope is that people will be able to engage with the story on a really deep level because it is so personal. I also think that after reading my memoir, it will bring my first two books into context. My second book, I Love This Part, is based on a real relationship I had. And that relationship is a key component of this book, which I think will be interesting for the audience to see. 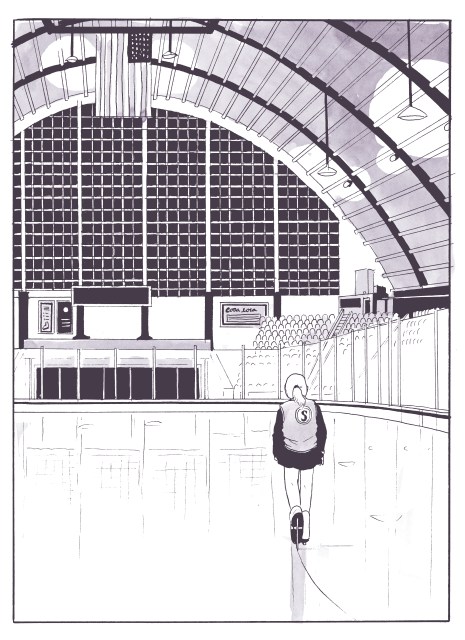 M: In your other comics, I’m absolutely obsessed with how perfectly you capture the feeling and mood of female friendships and relationships. How are we going to see that part of your work in this book?

W: Thank you! And yes, that is a huge part of the book. In fact, the heart of the book, or at least I think so, is about a girl I spent 7 years skating with. We were by each others side through every competition and practice, and our relationship is one of the biggest parts of the book. We spent the ages of 11 to 17 together, and how we grew up in different ways yet side by side is all in there. Another part of the book is also about me being on a synchronized skating team, which for those who don’t know is basically the team sport version of ice skating. That whole aspect was really fun to put in the story. The dynamic of the team both on and off the ice is really fascinating, and not very often seen since it’s a pretty unknown part of the ice skating world.

M: Why did you want to talk about this specific part of your life? What stuck with you about your time figure skating?

W: It’s hard to say. I never really thought this part of my life was important until recently. A strange thing happened, actually. When I moved away from Texas for school, I was determined to leave all my skating stuff at home, believing it was insignificant trash. Yet for some reason I couldn’t bear to leave home without two things — my old skating jacket, and a small patch that I got from a competition. It wasn’t until around the time that I started thinking about doing this book that I realized how much I had clung to those objects and why that was important. I couldn’t let go yet. I needed to understand why figure skating still mattered to me, and that’s why I’m making this book. Hopefully the answer is in there somewhere. 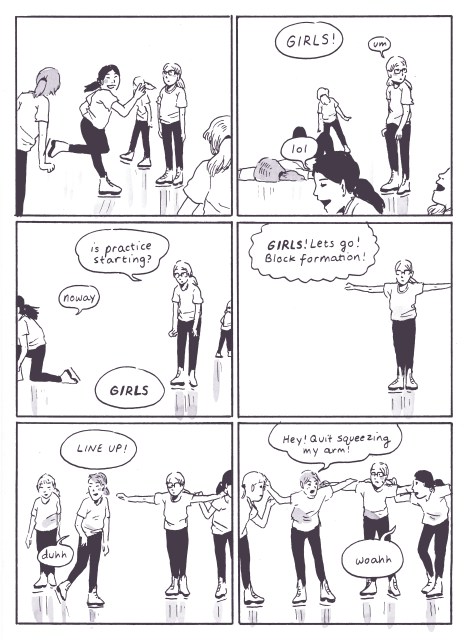 M: What are you most excited for about this book coming out?

W: I’m excited for people to know what all of this was like. So often I’ve tried to explain figure skating to my friends or family and I never felt like they got it. I would try and talk about how competition was more about the waiting then it was the performance, how it felt to put on fake hair and a fake smile, how it felt to stand alone on the ice in front of judges. But it was as if I was always describing something too huge to put in to words. So I’m excited to be able to show it all, share everything that I’ve wanted to say but couldn’t find the words for.

Spinning by Tillie Walden is scheduled to be released by First Second Press in Fall of 2017.

Harley Quinn and Her Gang of Harleys #2

Ink For Beginners: A Guide to Getting Tattooed

Pacific Rim Tales from the Drift #4