I’ve talked about a lot of types of comics in this column, but rarely have I gotten into horror comics. And that’s strange, because I love horror and I love comics. When we talk about horror comics, usually the first people we mention are masters like Junji Ito and Emily Carroll, but Alyssa Wong and Wendy Xu are quickly becoming a new force in truly terrifying short comics. If you’re ridiculously hot this summer and looking for a nice chill, these comics are absolutely guaranteed to send a cold shiver down your spine.

I first found Xu’s art through the comic Mooncakes, which isn’t really scary (unless you’re afraid of horses, but really, who hates horses?) but is about a two queer Asian-American young adults, a witch and a non-binary werewolf. It’s terrific and it really shows how good Xu is at doing both art that’s absolutely creepy and terrifying and art that’s more fun. But then I first saw her do a horror comic last November, in the short “Grandma From the Void,” also written by Wong, that’s actually based on a real life story from Wong’s childhood. Seriously, what is wrong with Xu and Wong that they want to terrify us with stories like this?? Why do they feel they need to make us loose sleep and never want to be alone in the dark again?? Why Alyssa and Wendy, why? 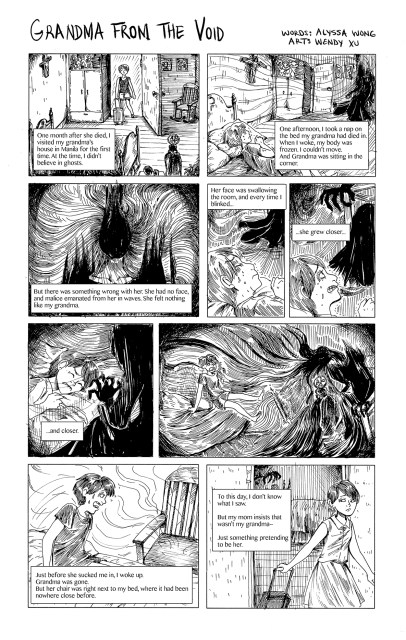 “Grandma From the Void” by Alyssa Wong and Wendy Xu

In “Grandma From the Void,” Wong tells about a terrifying experience she had shortly after her grandma died in Manila, Philippines. Each panel gets more and more creepy, and then just when you think all of the tension is released, Wong hits you right in the nerve with that final line. This is a perfect horror comic. The art is suffocating and disorienting, the words are simple, but detailed enough, and the story is real. It has all the ingredients. 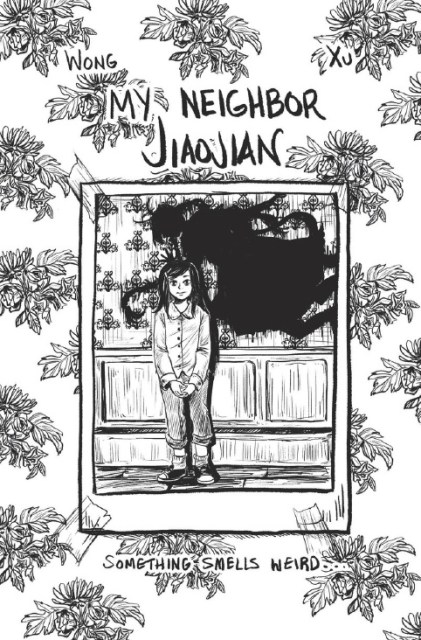 Despite its title and the fact that it’s about a girl moving to a new house with her father, “My Neighbor Jiaojian” is has nothing of the warm, cuddly friendliness of My Neighbor Totoro. In the back of the comic, the Wong describes the tale. “When Emily’s mother passes away, her father packs up the family and moves them to the East Coast. The new house is big and scary, but luckily, Emily’s got a new playmate: a girl named Jiaojian who nobody else can see.” Jeez, already that’s more than enough to scare me to death, but Wong continues. “Jiao knows everything about the house, and Emily is tired of being lonely. But when the walls begin to reek, and Emily’s father starts acting strange, Emily must decide if she is ready to learn exactly how her neighbor Jiaojian knows so much about their new house… and about Emily’s family.” I’m both completely sold and completely terrified.

Wong and Xu are great partners, perfect at putting out simple but atmospheric and chilling tales. If you’re a fan of Guillermo Del Toro or the previously mentioned Ito and Carroll, you’ll love these comics. They aren’t filled with cheap scares or gore, just chilling reminders of how scary the real world, and the world that lurks just beyond ours, can be. Wong’s tales that aren’t sprawling or epic, they’re actually pretty tiny, but that just makes it so that the horror is squeezed tightly into every corner, and Xu is terrific at drawing that. She draws rooms and wallpaper and ghosts and shadows that are filled with so much dread and atmosphere that they seem to take up an entire page. While reading “My Neighbor Jiaojian” I forget that it’s only six pages long. 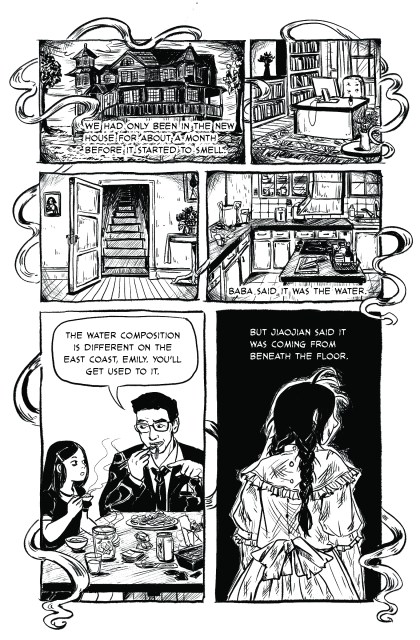 I’ve written about Xu before, the artist on the great webcomic Mooncakes, which you can support via patreon. You can also follow her on twitter. Alyssa Wong is a Nebula Award-winning writer and has also been a finalist for the John W. Campbell, World Fantasy, Locus, Bram Stoker and Shirley Jackson Awards. She can be found at her website or on twitter. Both of these creators are fantastic and their comics are horrible (in the absolute best way possible) and if you’re into horror comics, I can’t think of a better place to start. Wong will be selling copies of “My Neighbor JiaoJian” at Worldcon, Xu will be selling them at Flamecon, and the comic will be available online shortly after that.

Harley Quinn and Her Gang Harleys #4