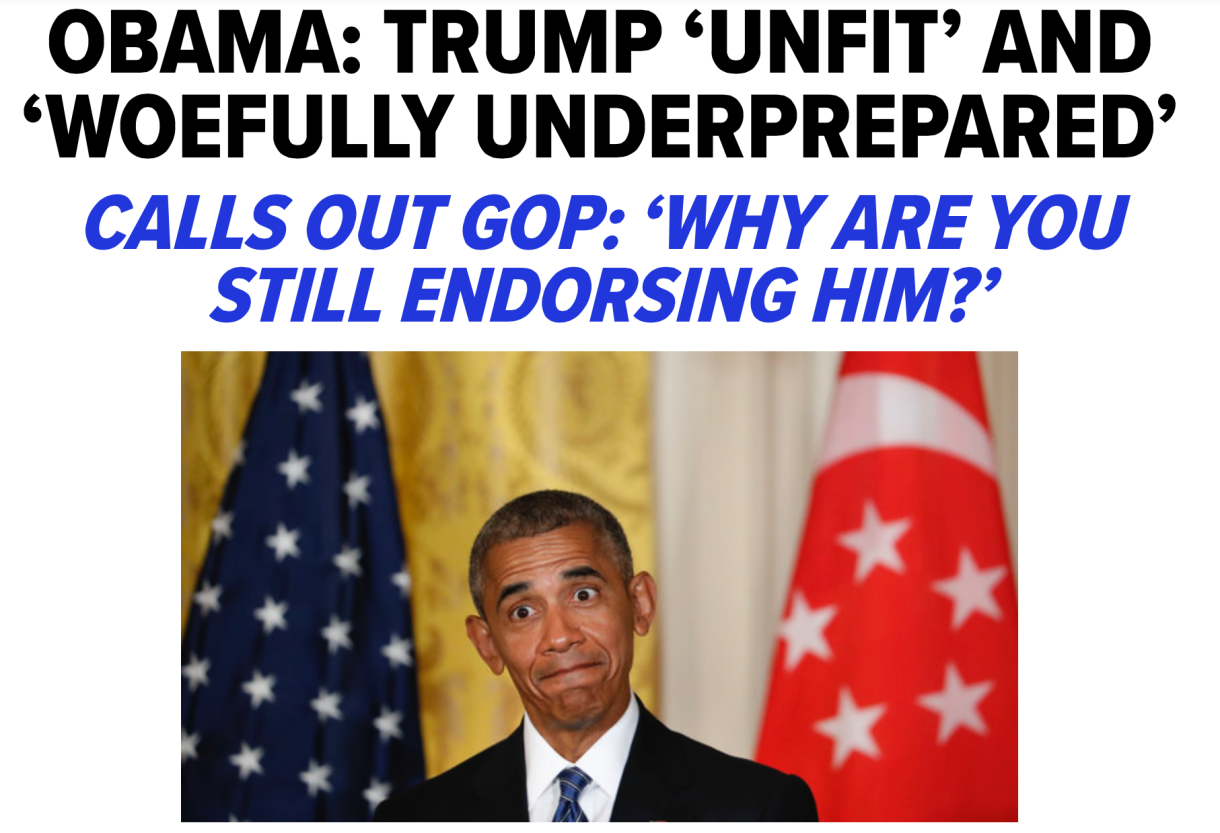 Despite a daunting to-do list that sends me into existential despair every time I recall its existence, I made time to watch that video of Obama calling Donald Trump unfit to be president, which required opening another browser due to a flash conflict I could fix if I wasn’t so busy thinking about Donald Trump.

I’m doing Whole30 this month but any potential sugar cravings have been overriden by my insatiable appetite for people calling out Donald Trump. I’m pretty sure when I get to Day 14 of Whole 30 — which the Whole30 Book says will make me want to “kill all the things” — I’ll only be thinking about killing Donald Trump.

Fuck my alarm clock, I wanna be woken up every morning by Damon Young announcing that Donald Trump is an adolescent Cheeto. I’d rather read The Washington Post explain why Trump is merely “a man with a disordered personality” than go to Walgreens to refill the medication I take to regulate my own mental disorder. At Planet Fitness I am teased and tortured by a series of monitors offering me perfect views of CNN and Fox News, with their warring tidbits of Trump-related information. (Also I always seem to park myself in front of the Tiny House Hunters TV, but that’s another rant for another day.) I wanted to lick my diseased outdated half-broken iPhone today after reading that Donald Trump evaded the military draft with a few deferments for education and then a final deferment for having fucked-up feet which magically healed, like so many things do, in the post-war era. I’d already watched the “you sacrificed nothing” clip 25 times before Donald Trump responded by claiming that doing his job, which involves giving jobs to other people, qualified as a “sacrifice” on par with serving in the military and dying for your country. “I haven’t found another way of saying this isn’t okay, this isn’t kind, this isn’t decent,” writes Ezra Klein on Vox. THIS IS IT, RIGHT? THIS IS THE NAIL IN THE COFFIN? NOW IT’S OVER, RIGHT? He’s a sociopathic narcissist!

DONALD TRUMP IS A MOTHERFUCKING FASCIST

NOTHING THIS MAN SAYS MAKES SENSE NOT ONE THING

WHEN YOU ASK HIM A QUESTION, HE FOREGOES ANSWERING IT IN FAVOR OF SAYING SOMETHING TOTALLY DIFFERENT

“NOBODY KNOWS THE SYSTEM BETTER THAN ME” SAYS THE MAN WITH ZERO EXPERIENCE WITH THE SYSTEM, LITERALLY ZERO

DONALD TRUMP IS MEAN TO BABIES

WHAT IF HILLARY CLINTON HAD TWO EX-HUSBANDS WHAT THEN

This feeling isn’t entirely unfamiliar as I recall feeling similarly agape and anxious regarding national affection for Sarah Palin leading up to the 2008 election (during which time I worked customer service for the button-and-shirt-sending wing of MoveOn.org, responding to aggressive e-mails from humans threatening to vote for McCain if their Obama t-shirt didn’t arrive within 3-4 business days), but, as my co-worker Heather Hogan pointed out, “I felt that about Sarah Palin at what I thought was a ten but now i realize was really more like a two and half.” Case in point: I dropped everything to fully engage with John McCain’s vicious rebuttal of Trump’s comments and wanted to wrap that statement in a red-white-and-blue bow and give it to myself for my birthday every single year until I’m as old as John McCain is right now. JOHN MCCAIN!

Have you read Donald Trump’s actual policy positions on his website? Did you know that his plan for building a wall between us and Mexico is to order Western Union and similar services to cut off wire transfers to Mexico, thus ending the “welfare” he says the US is providing to Mexican citizens through employing immigrants who send money home to their families, thus forcing Mexico to pay for the wall themselves so that the money wiring can commence again? THAT’S HIS ACTUAL PLAN.

Make no mistake: I live in a liberal bubble surrounded by people who agree with me. I know pro-Trump people exist and live nearby, but none of my friends or family are among them. Even my family members who live in a very conservative part of rural Ohio are Democrats (the only Democrats for miles, actually). The only presence on my social media feed that makes me feel like sporking my eyes out are the Bernie-or-Bust folks refusing to delay the inevitable apocalypse by voting for Hillary Clinton, as if feeling passionate about the political candidate you vote for was ever an inalienable right. (Remember voting for John Kerry?) Sometimes I wish I did know a real-life Trump supporter so that I could scream at them and release this pent-up fury. But also I don’t because I have seen the sorrow in your hearts and minds and eyeballs — all of you who have friends and family voting for Trump — and I will not degrade the depths of your pain by claiming it’d be cathartic for me to feel it, too.

Okay, I’m gonna get back to my to-do list now, but if you are also obsessed with the Donald Trump campaign, please tell me all about it. Please share links to stories of people eviscerating Trump or announcing his certain failure. (Please also share links to videos that make you feel better, like for example this one and this one make me feel better.) I need it. As the great Angela Chase once opined on My So-Called Life, “Hatred can become, like, food. It gives you this energy. You can, like, live off it.”  (This is especially important for me right now. Because Whole30.)