The documentary RELIGULOUS follows political humorist and author Bill Maher as he travels around the globe interviewing people about God and religion including Jerusalem, the Vatican and Salt Lake City, interviewing believers from a variety of backgrounds and groups, including a former member of the Jews for Jesus, Christians, Muslims, former Mormons and Hasidic Jews. He travels to Speaker’s Corner in Hyde Park, London, and satirically preaches Scientology beliefs.

The problem with religion is: The whole thing is based on some super-crazy books. Religion encourages followers to reject logic in favor of the mysterious and resolutely illogical “faith.” Some people ascribe to religion like they’re playing the lotto — “you can’t win if you don’t play.” 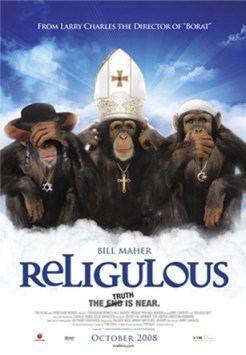 You might as well, just in case God IS real.

Footnoting & Fact-Checking the Bible: Original sin & immaculate conception were not in the original Bible. The virgin birth is only in two of the Gospels. The Bible features talking snakes and a man living inside a whale. The Mormons think that the Garden of Eden is in Missouri, God lives on a planet near a Star Kolab, dark skin is a curse, American Indians are a lost tribe of Israel, and magic underwear protects you from fire, knives and Satan.

Also? The same stories but with different characters appear in the books of every religion & ancient civilization — cultures that had no contact with one another. Only a similar dedication to storytelling and classic archetypal plots.

The story of Sodom & Gomorrah has been radically misinterpreted to demonize gays when it was just a story about people being bad hosts who threatened their visitors with rape… a common act of war/cruelty.

George Fucking W Cameo: “I believe that God wants everyone to be free … And that’s what I believe. And that is uhhh — part of my foreign policy.”

OMFG MOMENT: Highlights include a creationism museum (where triceratops – DINOSAURS — wear saddles ’cause humans apparently rode dinasours to the hunt), a biblical amusement park, and a bling-adorned Televangalist insisting Jesus wasn’t really poor and in fact that Jesus wants him to have lots of houses and cars.

A;ex says: A random woman Maher interviews drops this gem of an idea: “I don’t know a lot about politics but I will vote for President Bush because of his faith.” Go America!

On a Scale of 1 to 10: Like Michael Moore-meets-Borat but way smarter. Bill Maher’s sometimes off-putting arrogance works for him when he holds his own against religious fanatics. Entertaining & educational.

“The only appropriate attitude for man to have about the big questions is not the arrogant certitude that is the hallmark of religion, but doubt. Doubt is humble, and that’s what man needs to be, considering that human history is just a litany of getting shit dead wrong.”

Trembling Before G-d is an unprecedented feature documentary that shatters assumptions about faith, sexuality, and religious fundamentalism. Built around intimately-told personal stories of Hasidic and Orthodox Jews who are gay or lesbian, the film portrays a group of people who face a profound dilemma – how to reconcile their passionate love of Judaism and the Divine with the drastic Biblical prohibitions that forbid homosexuality.+

The problem with Ultra-Orthodox Judaism & Hasidism is: Although I personally would’ve done almost anything to get out of Hebrew School, the Jews in this documentary are super into G-d, are pretty sure G-d loves them too, and just want space for their truths within their religion. It’s a clash of new-school and old-school as many are ostracized from their families and those that do get married give their partner serious inadequacy issues.

“I have to believe that if someone is gay, then that is an assignment from Hashem, and that Hashem is somehow also sharing with that person, not just the strength to carry out the assignment as best as they can, but ultimately it’s part of the life purpose of that person to have struggled and to work with that particular issue among others. To do the best they can. These are the secrets of His soul.” 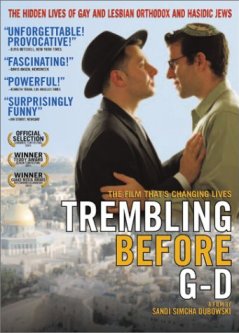 OMFG MOMENT: A gay man visiting a Hasidic neighborhood gets in a conversation about why his parents won’t talk to him anymore, and then passionately delivers the following monologue to an interested passerby and the cameras: “I know I live in my faith. I don’t know what that faith is, I don’t know what G-d is, I certainly know it’s not the G-d that tells me I shouldn’t do this, I shouldn’t do that, I’m not the G-d that stimulated that Yeshiva student when I was 15 years old to get me to confess that I masturbated, that I had sex with my brother and made me swear to him that I would never do it again and drove me 12 weeks later to suicide and drove me to a mental hospital and drove me to have electric shock therapy that burned out my brain. That’s not the G-d that redeemed Israel out of Egypt!”

Riese Says: Even after many years of religious & Hebrew education, a Bat Mitzvah, and a good amount of independent study, I didn’t realize that Jews had such a serious issue with homosexuality ’cause we’re not into the whole heaven/hell thing.

See; most Fundamentalist Orthodox & Hasidic Jews live in fairly insular societies; attending their own schools and living in their own neighborhoods. And unlike Christians with similarly redonkulous interpretations of their holy books who evangelicise across our country, these American Jews don’t put as much energy into recruiting or condemning outsiders. They kinda just stick to themselves and consequently, stick to their own insular homophobia. So therefore, I had no idea that homos were so unwelcome in the temple. Or — rather — I did know … but I felt we were moving forward more rapidly than it turns out that we are.

Right. So it turns out that everyone who dares to judge anyone beyond himself, empowered by this mighty book that begins with a magical snake (HELLO! “For God sent not his Son into the world to condemn the world; but that the world through him might be saved.”), becomes a self-righteous asshole.

However … there is hope! In fact, Trembling Before G-d jumpstarted a movement that began with a huge Sabbath at Sundance and streamrollied into over 800 screenings & conversations all around the world. Director DuBowski went on to start an Orthodox Outreach and Education Project with unprecedented reach.

Last winter, after years of intense discussion and debate, the Conservative Movement made a bold and historic policy change: legalizing the ordination of gay and lesbian rabbis and the ability to perform same-sex unions.

You can watch Trembling Before G-d in its entirety at One More Lesbian, and also right here:

Next time we’ll talk about Jesus Camp, a Jihad for Love, Equality U, Camp Out, Coming Out in the Developing World … any other tips?