It’s hard to believe that December is already upon us, and with it the enduring question: which lesbian, queer, bisexual and trans women characters can we anticipate to be streaming upon Netflix, HBO Max, Prime Video, Hulu, Peacock, Paramount+ and so forth? The answer is “not a whole lot” because it is now the holiday season, and despite a handful of queer developments in the past few years, we have been aggressively overlooked as a community in 2022.

I looked deeply into the contents of so very many new Christmas movies debuting this season and came up completely empty-handed regarding queer women and trans characters, although I would like to give my regards to the cis gay male community because they are about to have a banner year!

The only new Christmas movies announced thus far with queer women characters are Merry & Gay, which debuts December 1st on queer streaming platform DivaBoxOffice.TV and, allegedly, one called “Looking for Her” on Tubi, which I cannot find any info about aside from a brief mention in this Entertainment Weekly article.

Anyhow, let’s get into what else is on! 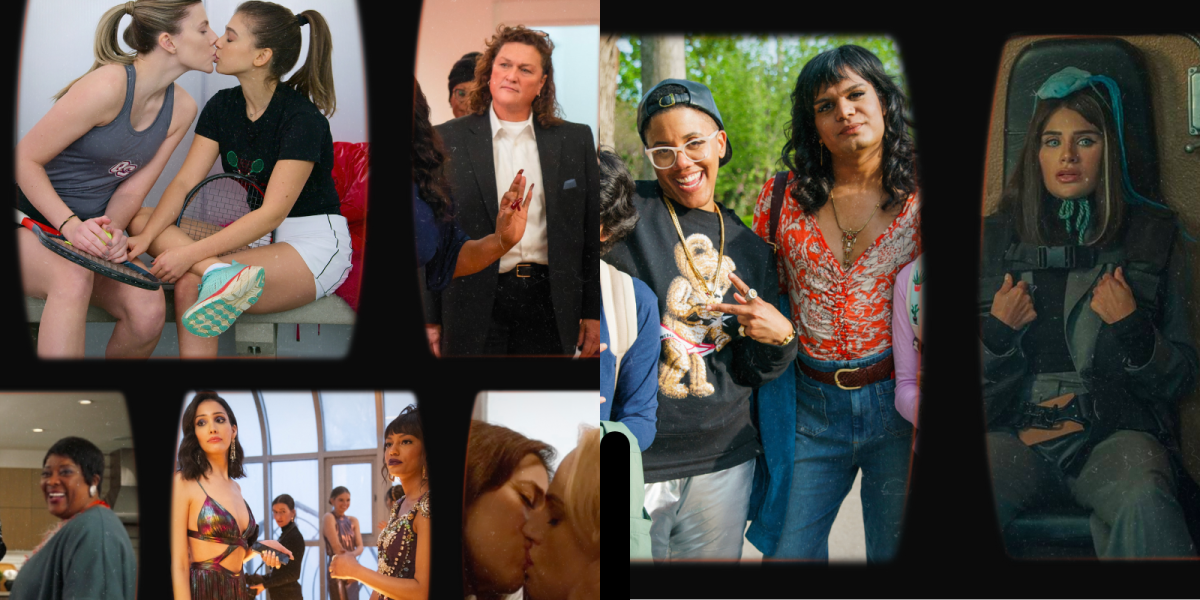 We’re so extremely very excited for the return of Sort Of, which won Most Groundbreaking Representation in the 2022 Autostraddle TV Awards. HBO Max has declared that it is the “season of love” for Sabi Mehboob (Bilal Baig) who’s looking for uncomplicated romance and for everybody in their lives to love each other. But drama is afoot: their Dad returns unexpectedly from Dubai, the Kaneko-Bauers are struggling with Bessy newly released from rehab and Bar Bük is facing a potential eviction and shutdown.

According to Collider, Season Two of this reboot about hot rich teenagers at an elite high school in New York City terrorized by revelatory text messages is “packed with as much campy fun and sharp pop culture references as the first go-around” while also containing “some of the first season’s flaws.” Queer character Monet will be working on her complicated relationship with her mother, continuing her quest for power and exploring her sexuality “a little more.”

In Season 4, “the team unexpectedly travels to the future to find an unwelcome surprise” and then, “faced with their imminent demise, the Doom Patrol must decide once and for all which is more important: their own happiness or the fate of the world?” Diane Guerrero is returning as lesbian character Kay Challis/Crazy Jane and Madeline ZIma is joining the cast as bisexual character Casey Brinke.Space Case, an everyday EMT with a peculiar origin story of her own sucked into the Doom Patrol’s escapades.

I Hate Suzie Too Premiere – December 22

I didn’t know we were getting another season of this delightful British black comedy! What a Christmas miracle! This three-part “anti-Christmas Christmas special” will find Suzie (Billie Piper) amid a rebrand with a new agent and a new job on a reality competition show, Dance Crazee. Her personal life remains rocky — she’s estranged from her best friend Naomi (a bisexual character played by Leila Farzad) and her ex-husband Cob, while trying very hard to create a good life for her son. Trans Iranian writer/actor Yaz Zadeh is also joining the cast.

In Season Two, former ultra-orthodox business mogul Julie Haart battles for control of her empire while going through a divorce. Furthermore, she will be attempting to reconnect with her daughter Batsheva and guide her daughter Miriam through her first committed relationship with a woman.

The fifth season of social media reality TV show “The Circle” has filled its one-bedroom apartments with singles, including the series’ first deaf contestant and quite a few LGBTQ people, including at least one bisexual woman.

I’m also getting a vibe from some of the stills from the Norwegian series “A Storm for Christmas,” out December 16, but obviously cannot confirm at this time.

Prime Video’s Offering To the LGBTQ+ Audience In December 2022

Two straight couples — Zoey Deutch is in one of them and Shay Mitchell is in the other — have a Tiffany’s box mix-up that causes their paths to cross and “sets off a series of twists and unexpected discoveries that lead them where they’re truly meant to be.” Importantly for us here, Jojo T. Gibbs and Javicia Leslie are lesbian wives!

Queer actress Rebel Wilson plays an archeologist grappling with her husband’s traumatic brain injury in this drama that also stars Charlotte Gainsbourg as an architect who’s female partner is suffering from a similar brain injury. Together they “fight to re-imagine a future” that has left them “adrift from the people they love” and, judging from the trailer, do find that solace in each other’s arms/mouths.

Hulu’s Lesbian and Queer and Trans Characters for December 2022

A delightful little comedy about “two codependent best friends — one straight girl, one lesbian — and the man who comes between them.”

30-year-old influencer Mack, who idolizes her dead grandmother and has always felt older than her peers, goes to a past-life regression situation and emerges in the body of a 70-year-old played by Diane Keaton. When this film came out pretty much everybody hated it. The alleged comedy also features Loretta Devine as Sharon, the mother of Mack’s best friend Carla (Taylour Paige), and Sharon is a queer woman who left her husband for a woman who then died.

This comedy revolves around a small rural Canadian community and two siblings who run a small farm and produce stand. In 2019, Valerie called it “surprisingly queer.”

This critically acclaimed Starz dramedy is about the family of Cam Calloway, an NBA basketball player who’s just made the big time and moved his family from Boston’s Dorchester neighborhood to Atlanta. Erica Ash is Mary Charles “M-Chuck” Calloway, Cam’s lesbian half-sister, who Carmen wrote was “one of TV’s most important lesbian characters” and truly I cannot recommend this show enough, I loved it with my whole heart.

This major studio gay rom-com that got so much press about people not going to see it that nobody ended up going to see it is focused on the love story between two white cis gay men, but has “a queer world that is predominantly trans and POC — even if the white cis gay men are the only ones with real characters.” Drew has described it as “not revolutionary, but hilarious.”

The first four episodes of the fifth season will drop on December 8, bringing with it openly bisexual model-turned-farmhand Julia Lemigova, who is married to transphobic tennis star Martina Navritalova. According to Kayla, “Her main storylines are having goats, saying goodbye to her teen daughters who are moving away, and possibly being in love with and/or romantically loved by her best friend Adriana de Moura.”