This post contains mild-to-moderate spoilers, but I really want you to watch this show, so I think it’ll be worth it.

On paper, Letterkenny isn’t the kind of show I am normally into. So imagine my surprise when suddenly I found myself finished with all six seasons within a week, squealing about the unexpected amount of queer content that somehow never crossed my radar in the three years it’s been airing, and delighted to have found a new “happy place” show.

I’m hoping, “it’s queer, Canadian, and there are only 40 thirty-minute episodes to date” will be enough to sell you, but in case it’s not, let me tell you a little more about this eccentric show I’ve come to love.

Letterkenny is a comedy about Canadian stereotypes, centering around three male leads and the main character’s younger sister. It’s about Canadian hicks and Canadian hockey bros and Canadian goth “skids” and it’s just… so many men. Who fight a lot. I’m talking fisticuffs. Even when my friend Bridget pitched it to me, knowing my penchant for misandry she said, “I think you’ll really like this show, it’s very funny… but it’s a lot of men. So brace yourself.” And she’s the reason I found such Canadian gems as Schitt’s Creek, so I trusted her and dove in.

I’ll admit to you, the show is… weird. I watched the first episode and was fairly certain they weren’t speaking English, with their Canadian accents and rapid-fire references that flew over my head like a majestic Canadian goose. There were self-proclaimed hicks on a farm and hockey bros slinging insults back and forth at each other, greasy-haired boys dressed all in black doing wild dances outside the dollar store, a scantily-clad girl that seemed like maybe all she’d be is a sex symbol. 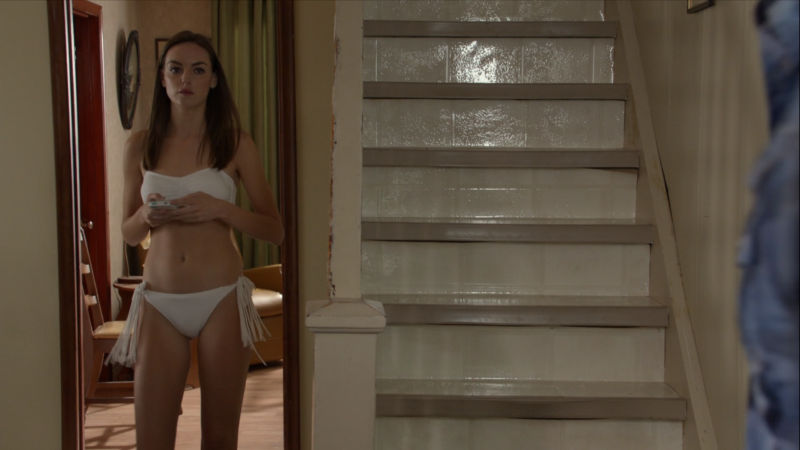 And I mean listen I’m glad Katy has depth but I’m also not mad at the fact she hates covering her midriff.

But by the end of episode two, something had happened without me expressly realizing it. I had come to care about these characters in a deeper way. By the end of the second episode, the set-up of the caricatures was over, and they had started to explore the relationships between all these characters. The brother/sister dynamic between the two main characters, Wayne and Katy, had suddenly become very important to me. Their friendship with farmer pals Daryl and Dan became precious. By the time I finished the second season, I was saying certain words in a Canadian accent and picking up phrases from their running bits. (Side note, that’s one of the best parts of this show: they know how to keep a running bit fresh; it’s never overdone, they never go stale.)

Much to my surprise, it quickly became clear that Katy was much more than the hot girl there for the ogling. (Though there is a running joke about Wayne thinking Katy doesn’t wear enough clothes in that big brother way, and Katy not caring what he thinks.) Katy is sassy and funny and smart, and (spoiler alert) quite queer! In fact… most of the recurring female characters (and some of the male characters) are queer in a casual way. Katy never “comes out” or discusses it, she just is dating two men at the beginning of the series, and then sleeps with a woman (off-screen) at a St. Patrick’s Day party.

And Katy’s queerness isn’t a one-and-done situation, contained to one episode then never mentioned again. There’s a running joke about one of the bartenders at their favorite bar being swoon-worthy and Katy is always swooning right alongside her guy friends. And I swear she has chemistry with every woman she interacts with.

The bartender at said bar, Gail, is hypersexual in an over-the-top way that’s made funny by how people barely react to her practically humping the bar while she’s talking. But her sexual comments aren’t limited to gender. And then there’s Tanis, a First Nations woman (played by a First Nations actress) who lives on the nearby reservation, and is either friend or foe to Wayne depending on the day. She’s fierce and is the leader of a group of loyal followers. At one point she states explicitly that she swings both ways. 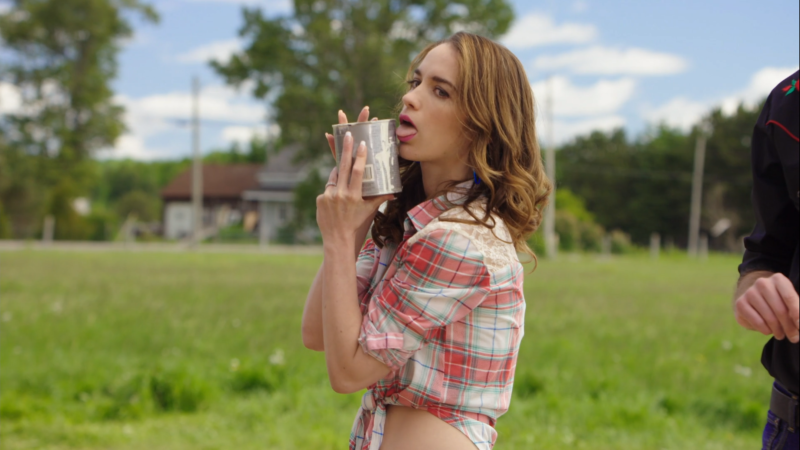 I cannot overstate how bananas her character is.

Queerness isn’t played for the joke, though sometimes it plays into it. It’s never the butt of the joke, and the ultimate conclusion everyone always comes to is, “Different strokes for different folks.”

Overall, there was a lot that surprised me about the show as it went on. I never had to worry about a forced romance plot between Katy and Daryl or Dan. They have earnest conversations about feminism and homophobia, often propelled by the burly Squirrely Dan, who is in a women’s study class. But also hilariously serious conversations about ridiculous things, like whether or not an ant could ride a Sea-Doo.

The biggest thing for me is the found family aspect of this show. Wayne, Katy, Daryl, and Dan are a unit. They have traditions they never break, and they support each other in everything from brawls in the driveway to the Adult Spelling Bee. Guest actors from your favorite Canadian shows are apt to pop up at random (like aforementioned Melanie Scrofano, Clark Backo, also from Wynonna Earp, plus Kelly McCormack from Killjoys) and even when you don’t 100% get the references, you’ll still find yourself laughing at the absurdity of it all.

So if you want some surprisingly queer, obscenely funny, lighthearted joy to escape the real world, Letterkenny is a low-investment, high-reward way to do just that.

All six seasons of Letterkenny are available to stream on Hulu in the US, and on CraveTV in Canada. Pitter patter.