LGBTQIA+ and ex-Orthodox groups both talk about “coming out.” Those of us who belong to both groups often have to specify which one we mean: “I came out as ex-Orthodox” or “I came out as lesbian,” etc. Both groups also share the condescending doubt they face, often expressed as “it’s just a phase.” As an ex-Orthodox queer person myself, I’ve faced this kind of erasure in multiple parts of my life. Within the queer community, bisexual people often face erasure from their fellow queers or queer allies who assume that the bisexual person will eventually “figure out” whether they’re really gay or straight. In the case of bisexuality, people often have their identities mischaracterized as an insatiable desire for multiple sexual partners, and in the case of ex-Orthodoxy — an insatiable desire for material pleasure over spiritual. 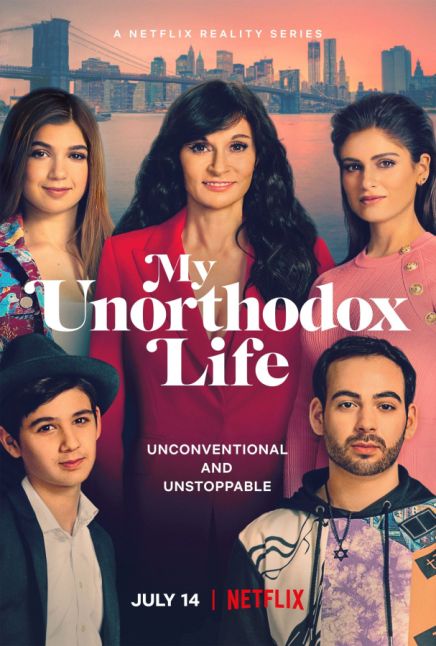 The Netflix reality show My Unorthodox Life misrepresents Orthodox communities, ex-Orthodox individuals, and feminism. Its queer themes aren’t as prominent as its religious and feminist themes, with only two openly queer lead characters: Robert Brotherton, the gay COO of Elite World Group, and Miriam — Julia Haart’s bisexual daughter. While Robert’s sexuality is never questioned and never a major plot point – his reluctance to date has nothing to do with homophobia – the show reinforces negative stereotypes about bisexuality through its treatment of Miriam.

Speaking to her husband Ben, Bat says, “Miriam is in that time in her life where she is, like, trying everything out, but I definitely think it’s, like, an experimental stage… It’s like a shock value factor, I think she’ll still end up with a guy.” Ben agrees, “Yeah, I don’t see her settling down with a woman.” By the end of the season, Bat and Ben are proven right. While we see Miriam dating two girls over the course of the show, each of whom appears in just one episode, her boyfriend Nico appears in three episodes and the relationship appears to be going strong by the end of the season. While Miriam is a real person and this isn’t a scripted show, the framing of the season – beginning with Bat and Ben’s statement that Miriam will end up with a man and ending with that scenario apparently playing out – reinforces the idea that Miriam’s bisexuality was never real, that she was just “experimenting,” just “going through a phase.”

I am asexual/demisexual and panromantic, but my first queer coming-out was as bisexual. I came out at first to two bisexual friends who, incidentally, are married to each other. I grappled with the messages that I got from all kinds of media which I can now recognize as bi-erasure. When I felt safe enough to come out to more people, one lesbian friend said to me, “You’ll figure it out eventually,” as if coming out as bisexual was either just a step to figuring out that I was fully lesbian or testing the waters only to discover I was fully heterosexual. I don’t currently use the term bisexual for myself because my sexual and romantic orientations need more complex descriptors, but bisexuality still forms an important part of who I am. 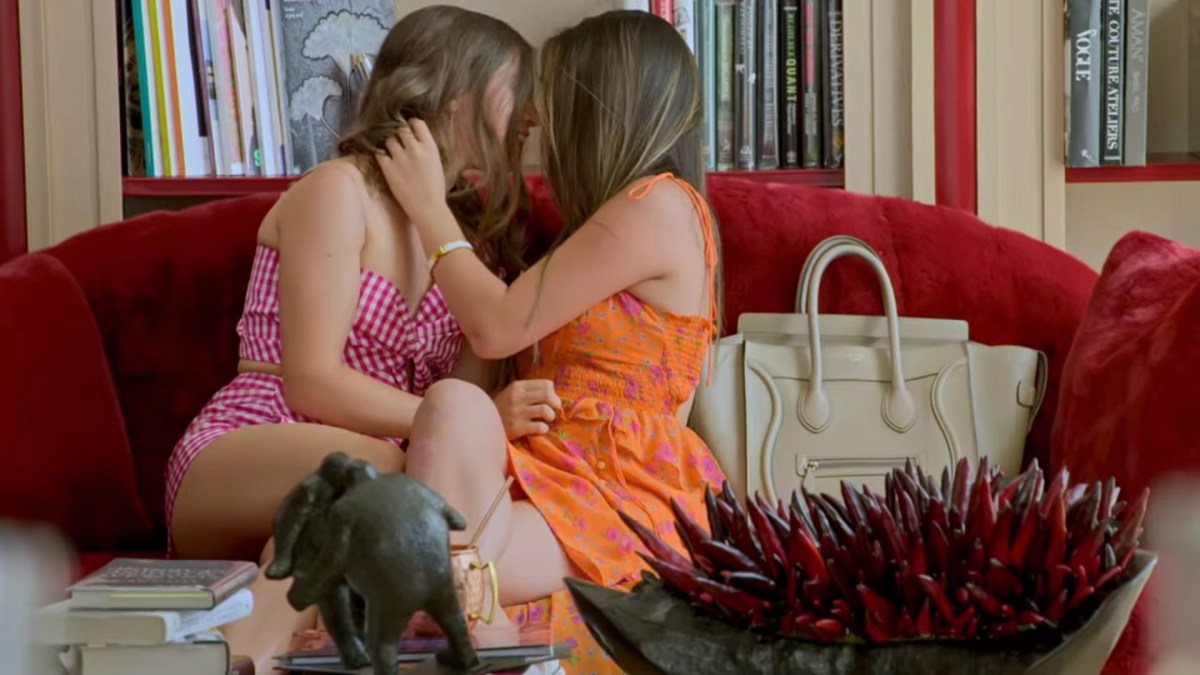 The responses to my coming out as queer – both this coming-out as bisexual and my later coming-out as nonbinary – were similar to responses I got from family and community when I came out as ex-Orthodox. I moved out of my parents’ home in Boro Park, Brooklyn in January 2014. I came out to my mother in April, around Passover, when I could no longer avoid it. In June, while I was on my first non-Orthodox trip abroad at a summer program in Exeter, U.K., my mother told me that a cousin who’d hosted me for Shabbos a few times in Washington Heights, when I was exploring Modern Orthodoxy, had suggested a potential match. She found it ironic that the cousin said he was “not as religious as your daughter.” I asked her why she doesn’t just tell our cousin that I’m no longer religious, and if she’s not telling her or anyone else, then what does she tell the matchmakers who must still be calling? “I tell them you’re seeing somebody,” she said. “That way, when you come back, you won’t have damaged your reputation and you won’t have trouble finding a match.” To my mother, leaving Orthodoxy was a phase, even at age 25. I would eventually figure it out and come back.

In the show, Miriam is also portrayed as more freely sexual than the other gay and straight “characters”, dating three different partners over the course of the nine-episode show while all others either remain with one partner or take their relationships much more slowly. This portrayal echoes the equation of bisexuality with promiscuity that appears in both homophobic and queer spaces. In the first episode, Miriam invites Kai to her mother’s fashion show after only two dates. By the third episode, Miriam is dating Katherine, whom she brings to Robert’s birthday party. 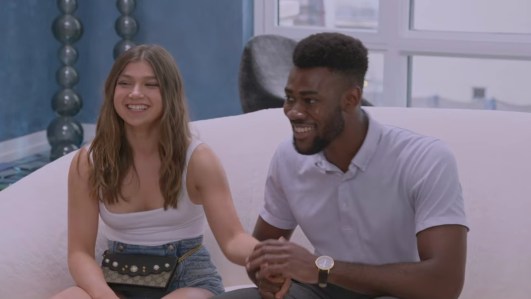 By the seventh episode Miriam reveals that she is dating Nico, and at the launch party for Miriam’s new app, Miriam’s two exes meet her current boyfriend. From across the room, Robert and Bat comment that Miriam “has a menagerie of love over there,” and Robert then says to Miriam, “Every party I’ve been to, you made out with one of these people,” again equating bisexuality with promiscuity.

At one point in the series — in what she claims is an act of sisterly love — Bat points out, “You just had this girl like five seconds ago from Ima’s fashion show, and now you have this other girl.” In a confessional a few moments before, after witnessing Miriam making out with Katherine at a party with their Elite bosses in attendance, Bat says, “I 100% support Miriam if she says that she feels she’s bisexual…I’m just a little taken aback that she decides to do this in front of all her bosses.” In one sense, Bat has a point as Miriam’s makeout session gets shocked looks from everyone at the party. But her choice of words, “if she says that she feels she’s bisexual”, is loaded with doubt, and her comment about the rapid change in Miriam’s partners is tied to her bisexuality.

This perception of bisexuality as not so much a sexual orientation but a libido in overdrive is again similar to the perception of ex-Orthodox experiences. Shortly after coming out to my mother as ex-Orthodox, I had a tearful phone conversation with her in which she blamed my defection from religion on an inappropriate desire to be part of academia at the expense of my spiritual well-being. I was luckier than other ex-Orthodox people, whose materialistic desires are blamed on “immodest” clothing and sex. My materialistic desire was secular knowledge, but the message was the same: I wasn’t really a defector from Orthodox Judaism, it was just that my temptations and desires led me to a life of debauchery – just as Miriam wasn’t really bisexual, she was just playing around with sex.

It’s ironic that some of the methods used to delegitimize ex-Orthodox people are used to delegitimize bisexuality in a show about leaving Orthodoxy. To her credit, Julia counteracts Bat’s bi-erasure in the first episode, catching Miriam’s hedging when she tells her mother, “So, I was telling Bat that I’m, like, bi, whatever.” Julia replies, “Not bi-whatever. Bi. Own it.” But while Julia is continually shown berating Bat for letting Ben have a say in whether she wears pants or has a baby, she’s never shown berating Bat for her comments about Miriam’s bisexuality. We all — ex-Orthodox, Orthodox, and bisexual – deserve better from Netflix than the perpetuation of misconceptions about our identities.

Dainy has written 1 article for us.