There’s so much news and so much of it is very upsetting. Please take care of yourself! Take a break if you need one! Watch some Bob Ross!

We now have available bystander video of Sandra Bland’s arrest, dashcam video from the officer who arrested her, and a transcript of the conversation between her and the officer. The video/transcript confirms that the inciting incident seems to be that Bland refused to put out her cigarette while she was still inside her car (which she had a legal right to do), Bland asked several times what she was being arrested for without a meaningful response, officer Brian Encinia threatened to tase her several times just for her perceived attitude, and that Bland repeatedly stated that she would take her case to court. Bland can also be heard asserting that she’s being injured several times; she says that her wrist is being hurt and that her head is slammed into the pavement. Encinia has claimed that he arrested Bland because she began assaulting him; the video, however, shows that there doesn’t seem to have been significant physical contact between them until Encinia had already started arresting her, which makes the reported order of events seem backwards at best. The dashcam video released by the police department seemed inconsistent to many; there are moments when cars in the background flash in and out of the frame as if the video has been spliced together. The police department insists that this is not proof the video has been edited, and that it was instead “a technical deal with the uploading to the YouTube platform.” Police have since released a new video that does not have visible glitches.

The new video is about three minutes shorter than the original footage. It did not contain two key glitches that had prompted a flurry of speculation over the video released Tuesday — footage that appeared to be missing or repeated at around minute 25 and minute 33. Instead, it appeared to show a continuous record of the July 10 roadside encounter that preceded Bland’s arrest in the small town of Prairie View, northwest of Houston.

We know that she appears to have left a voicemail from jail for one of her friends, saying “I’m still just at a loss for words honestly at this whole process… How did switching lanes with no signal turn into all of this, I don’t even know.” According to a bail bondsman, she also tried to bail herself out before her death. 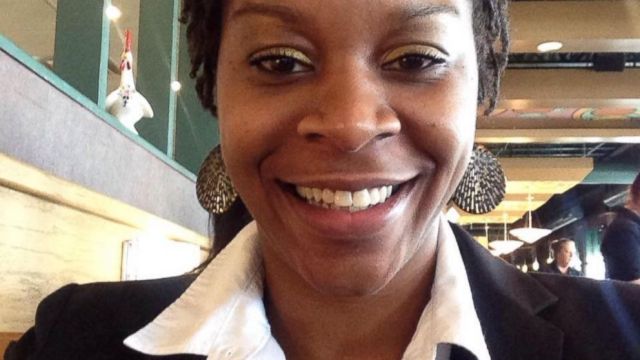 It’s reported that during Sandra Bland’s intake, she indicated that she had previously tried to commit suicide after the loss of a baby. The information on the form seems inconsistent, however; the dates of the previous attempt are 2014 in some places and 2015 in other places, and elsewhere on the form when asked if she had ever attempted suicide the form says “no.” Bland’s friends and family say they were not aware of any history of suicide in her life.

Waller County District Attorney Elton Mathis is investigating Bland’s arrest. A Texas Rangers probe into her death is being supervised by the FBI.

Many are pessimistic about the possibility of ever finding out for sure what happened to Bland, let alone seeing any charges filed against Encinia or significant change in the policing practices of the area. Regardless of how the criminal investigation into the incident proceeds, Bland is still dead; nothing can bring her back, even with video evidence. It’s an important reminder of the limitations of proposed plans for video recording of police officers; Encinia knew he was being recorded on a dashcam, and still felt comfortable treating Bland as he did.

+ A white former Baltimore police officer is planning to perform in blackface to raise funds to support the six officers who have been indicted for Freddie Gray’s death. For real.

CBS Baltimore asked Berger if he thinks his planned performance perpetuates an underlying tone of racism surrounding the Freddie Gray case. He said no, and said his act isn’t racist. Berger said in an interview with The Associated Press he doesn’t believe there is anything racial about his routine.

“It’s coincidence,” Berger said about the fact that the entertainer he impersonates wore blackface. “There’s no racial overtones to this show. There’s nothing racial to the show.” 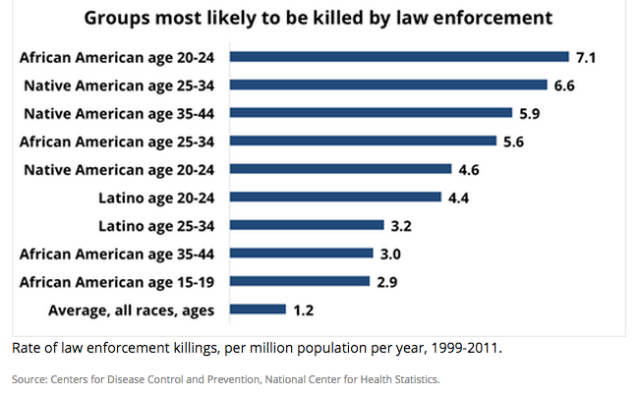 + Samuel Dubose, 43, was shot in the head inside his own car when he was stopped by police for a missing front license plate. The Cincinatti police department says that the white officer, Ray Tensing, “was wearing a body camera and that the video confirmed that there was a struggle. The video won’t be released until the investigation is complete.” 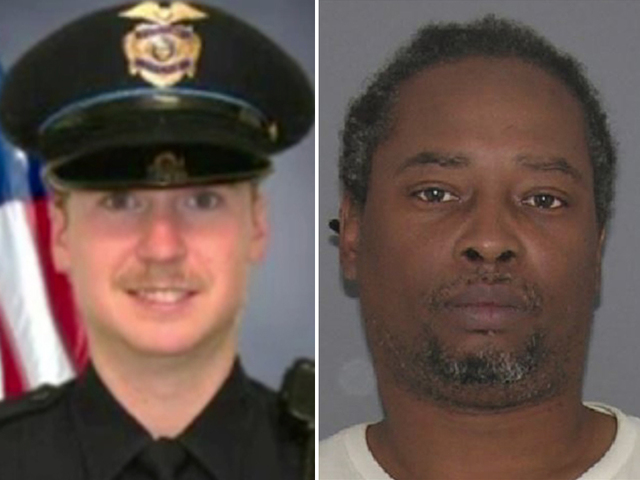 + Dylann Roof has been indicted on 33 federal charges, including hate crimes and obstructing the practice of religion, charges which could include the death penalty, though prosecutors have not stated whether they will seek it.

+ The Eighth Circuit court of appeals has struck down North Dakota’s abortion ban, the most restrictive in the US. The ban had prohibited abortions after six weeks, a timeframe in which one might reasonably not even know they were pregnant yet.

+ A new report suggests that one tool in helping people reach safety from abusive relationships could be giving them access to a free lawyer. In addition to the obvious human value of improving people’s access to an infrastructure that can help keep them safe, the report argues that the free legal aid could pay for itself and ultimately save the state money on medical costs, criminal justice costs, and more.

According to Department of Justice statistics cited in the report, women in the lowest-income households experience seven times the rate of abuse that women in the highest-income households suffer. A lawyer provides some of the tools necessary to escape a violent partner, from a protective order (one study cited by the report shows that 83% of victims armed with a lawyer were able to obtain a protective order, while only 32% managed to do so without; while these orders are often violated, Grab calls them a “tremendously important” step in the escape process) to help with immigration issues, child custody and housing.

+ Amazingly, nine counties in Alabama are still not issuing same-sex marriage licenses. “Alabama law says probate judges “may” issue licenses instead of “shall.” Judges have cited that language as they closed marriage license operations rather than issue them to gay couples.”

+ In a really horrifying story, drunk white businessmen who mocked and assaulted a group of Lakota teens who were on a school field trip to celebrate their academic achievements will face virtually no legal consequences.

“The first thing that really offended me was that they brought the communications guy from Rapid City with them and I gave him the microphone so he could talk to the people. He said, ‘if anyone wants to use the talking stick when I’m done, let me know,’” she told ThinkProgress. When the misdemeanor charge was announced, “nobody really said anything because [they] thought ‘okay that’s the first one, that’s probably the lesser charge.’ And that was it. Everybody was just dumbfounded.”… On the day of the first hearing, O’Connell, who has plead not guilty, was a no-show. Rapid City Attorney Joel Landeen, who is representing the students, asked that a jury hear the case and for jail time to stay on the table. Due to their large presence in Rapid City, Native Americans were hopeful that some of their own would sit on the jury. But the judge presiding over the case has since denied both requests, so the maximum penalty is a $500 fine. No hate crime, assault, or child abuse charges are being pursued.

+ The Equal Employment Opportunity Commision (EEOC) voted 3-2 that “the ban on sex discrimination in Title VII of the Civil Rights Act includes a prohibition on discrimination [on the basis of sexual orientation]”.

+ It appears that some factions of the GOP are devising a terrifying new plan to protect “religious freedom”: the First Amendment Defense Act.

The First Amendment Defense Act is already proving contentious within the party. Moderate Republicans, the Times reveals, have suggested adding two new provisions to the act to make it more palatable to the general public while still protecting those organizations that the right sees as important from the scourge of homosexuals coming to take religious freedoms away. And now even those Republicans who previously fought against same-sex marriage are being a little skittish about the First Amendment Defense Act, including House Speaker John Boehner, long known for his anti-gay views.

+ The very first “on-reserve” Six Nations LGBT Pride Parade will happen this Saturday. The event flyer describes itself as a “gathering in celebration to show support and love for our Two-spirited brothers and sisters. We are fostering and encouraging a safe and accepting environment for everyone regardless of orientation, identification or preferences. The intent is not to create or feed into labels, but to break down stigmas and biased ideas created by imposed colonial labels.”

+ This German magazine ad seems to depict Angela Merkel as being in a same-sex relationship, possibly as commentary on her comments that “marriage is a man and a woman living together.” 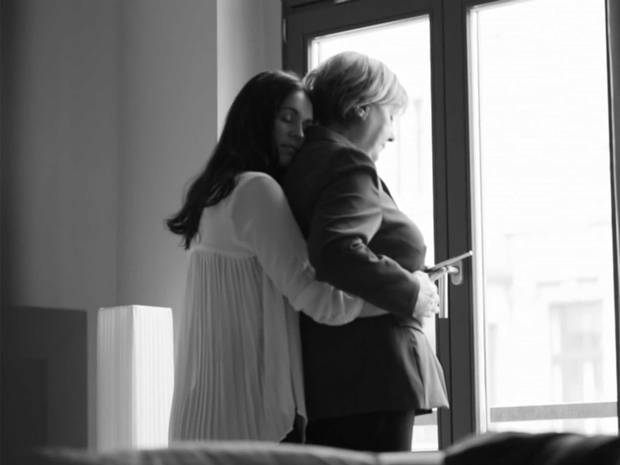 + Over 600 scientists and their peers have signed a letter to the American Association for the Advancement of Science to cool it with the sexism.

In one instance, a postdoctoral researcher was advised to “put up” with workplace sexual harassment “with good humor.” Another article explained how a male scientist managed to balance his heavy work load: his Ph.D. scientist wife “took on the bulk of the domestic responsibilities.” Also referenced was an offensively stereotypical cover about transgender sex workers (featured above) and a terrible tweet from the editor of Science Careers which asked, “Am I the only one who finds moral indignation really boring?”