It’s our twenty third Autostraddle Anonymous Sex Toy Review! Over the last few years, we’ve been propositioned frequently by sex toy companies wondering if we’d like to review their toy in exchange for, you know, their toys. In 2011, in addition to “saying yes to the dress” we started saying YES to the sex toys!

I’m going to warn you in advance that this is a pretty disappointing review. I was very excited about this toy, which is possibly why I ended up being so disappointed — unrealistic expectations and all that — but I feel it’s only fair to say from the very beginning that ultimately, I didn’t love this toy.

So what exactly is the Hello Touch? According to the Jimmy Jane website, here’s what you’re gonna get: 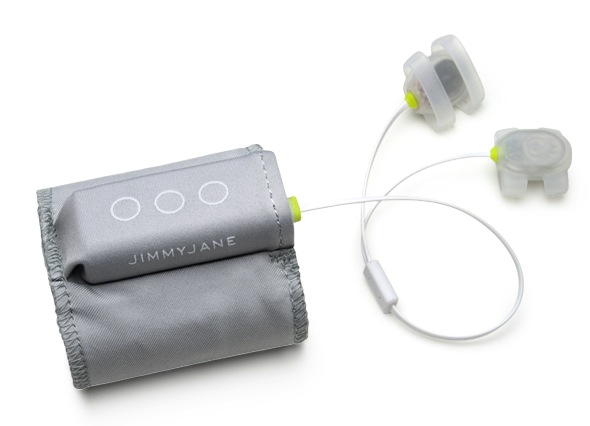 My first impression of the Hello Touch (after reading on Gizmodo that it “may be the best sex toy ever invented“) was total awe. A sex toy that would turn fingers into vibrating magic wands while still allowing the dexterity that makes fingers so great in the bedroom? Yes please! I couldn’t wait to try it out.

Real talk: This thing looks a bit like an iPod. There’s a wristband that houses a control pad, and there are two small buds attached to the control pad with wires. Seriously, to the casual observer this could be a teeny tiny iPod for your pet dog or something. But it’s not. The buds are not ear buds but little pads that go on your pointer and middle finger (or thumb, if you want). And the control pad won’t play Beyonce or anything like that — it simply switches the device on or off. (There are no settings — it’s just an on button and an off button, wham bam thank you ma’am.) To be honest the toy — my toy, at least — is a little bit finicky when it comes to turning “on,” but once it’s on and buzzing you’re all set.

Speaking of buzzing: This toy is loud. The noise isn’t bad when it’s actually touching a body — when your partner’s fingers are on your clit or inside you the sound is muffled — but I wouldn’t necessarily use it when your roommates are home. Also, the bands that keep the vibrating pads attached to your fingers are very tight (and they’re non-adjustable), and when I tried wearing the toy my fingers quickly became numb from the pressure. If you’re using this toy solo it can also be kind of disconcerting to feel your fingers go numb from the vibrations — like I said, they’re strong, so what may feel really nice on your clit renders your fingers tingly and sore. For these reasons, I ruled the toy out as an option for when I’m masturbating — it may seem petty but the pain in my fingers detracted from the experience enough to make it Not Worth It.

On the other hand, when my partner put the toy on and used it on me, I did enjoy myself. It was fun to feel the intimacy of finger play while also benefiting from the vibrations only a toy can provide. I was skeptical that my partner would be able to insert a finger inside me with the pads on, no matter how sleek they are, but I was pleasantly surprised and enjoyed that aspect of the toy very much. It also felt great on my clit and my nipples, but weird on my inner thighs, which was a bummer because my partner and I usually engage in a lot of teasing and my thighs are used to getting a lot of attention. That wasn’t really an option with the hand that wore the toy because the vibrations felt tingly in a bad way.

Overall, I don’t mind adding this toy to my collection, but I wouldn’t want it as my primary vibrator and I don’t know that I would recommend it to a friend. I think the Hello Touch is definitely a no-go anyone who doesn’t like strong vibrations because the vibrations are STRONG, but even for those of us (ahem) who do, there are enough downsides to this toy that I’d think carefully before spending money on it. While it boasts that it’s the right toy for anyone who likes “to touch or be touched,” I’d argue that it actually doesn’t feel so great for the person doing the touching, and sometimes it doesn’t even feel that great for the person being touched.