This is the week’s news so far!

+ More than a thousand Black Lives Matter activists met in Cleveland, Ohio this weekend for The Movement for Black Lives National Convening, an inaugural national conference about systemic racism, police brutality and violence and intersecting issues like immigration, economic justice and LGBT issues. It took place at Cleveland State University. 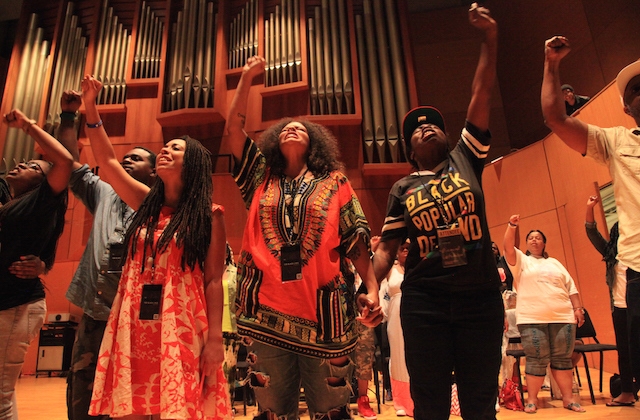 As the conference ended on Sunday, a white transit police officer pepper-sprayed a crowd of Black Lives Matter activists who were protesting the arrest of a black 14-year-old. According to the Greater Cleveland regional transit authority, officers were taking the teen to the police station because he was drunk on a bus. After seeing the boy in the squad car, a large crowd of activists blocked the car and tried to get him out of it. The crowd was also chanting and demanding the boy be released. One of the officers began pepper spraying the crowd.  Law enforcement agencies responded, including the Cleveland Police, who are not affiliated with the transit officers. No arrests were made.

+ Waller County District Attorney Elton Mathis announced that a committee of outside lawyers will investigate Sandra Bland’s death. The committee will be led by former prosecutors and defense attorneys Lewis White and Darrell Jordan. They’ll make recommendations on possible criminal charges to Mathis and if Mathis disagrees, the committee of lawyers has the authority to present their findings to the grand jury reviewing Bland’s death.

+ Sandra Bland’s autopsy and custodial death reports are now available to the public. The autopsy findings match the police’s story that she hung herself.

+ Ruth Asawa School of the Arts in San Francisco will be the first to offer a LGBT high school history class. It will cover pivotal moments in LGBT history including the Stonewall riots, the AIDS crisis and the legal battle for marriage equality. The college prep class was approved by the University of California, qualifying it for the UC system.

+ The Boy Scouts of America made it official and lifted the ban on gay and bisexual adult leaders and volunteers, but will allow local chapters to set their own policies for adult leaders and volunteers. The BSA’s national executive board ratified the resolution yesterday after it received unanimous support from the executive committee when they met on July 10. The decision is a baby step in the right direction but not enough, since local troops — of which 70% are sponsored by faith-based organizations, many with anti-gay beliefs, according to The Advocate — can refuse to let gay people work with them.

+ Meagan Taylor, a black trans woman who was profiled by hotel staff and police as a sex worker, was released from Polk County Jail in Des Moines last Wednesday.

+ Rexdale Henry, a 53-year-old Native activist was found dead in the Neshoba County Jail in Philadelphia, Mississippi, a day after Sandra Bland was found dead in hers. He was arrested for failure to pay a traffic citation. Officials haven’t publicly released his cause of death but Henry’s friends and family sought an independent autopsy. His body was flown to Florida for a private autopsy that was funded by anonymous donors.

+ Ralkina Jones, a 37-year-old Cleveland woman, died in a Cleveland Heights jail cell on Sunday. She was arrested on Friday and charged with assault, domestic violence, endangering a child and criminal mischief. According to police, she broke her ex-husband’s car window and tried to break his windshield with a tire iron. Jones hit her ex-husband on his arm before getting into her car and almost running him and his friend over, while her 12-year-old son was in the backseat of the car. Police say she was “lethargic” when they checked on her in jail. She was taken to the hospital Saturday evening and was given medication for a prior health condition and later returned to the jail. She was found dead early Sunday morning. An autopsy was scheduled to happen yesterday.

+ KC Haggard, a 66-year-old trans woman, was stabbed to death on the street in Fresno, California last Friday, making her the 11th trans woman murdered this year. The news comes a few short days after India Clarke, a young black trans woman, was found dead in Florida. KC was fatally stabbed in the neck early Thursday morning by someone in the front passenger seat in a light-colored Saturn SUV. The stabbing was captured by a local tattoo shop’s security camera and in it you can see the passenger beckoning KC to the window and striking her as soon as she leaned into the window. The SUV quickly sped off after they struck KC. She was left on the street for 2o minutes before someone called paramedics. Police are investigating this as a homicide and are still looking for the suspects. Karen Adell Scot, executive director of TransCare organized a vigil for KC last week at the spot where she was killed. A second vigil to memorialize KC is tentatively scheduled for Thursday at the Fresno LGBT Community Center.

+ On Friday, a federal judge in California ruled that the detention of undocumented mothers and children is a violation of a 1997 court settlement and they should be released immediately. The 1997 Flores agreement set guidelines for holding minors in immigrant detention and mandates for them to be held in the “least restrictive setting” possible and to adopt a “general policy favoring release.” Immigration judges have begun to release women and their children without bond who were detained at the South Texas Family Residential Center in Dilley, Texas.