Hello May flowers! Here’s some news for you cool kids.

+ After Baltimore’s State Attorney Marilyn Mosby announced several criminal charges against the 6 officers who arrested Freddie Gray, she became an overnight internet superstar/hero. Mosby’s announcement was shocking to many, especially in the wake of high-profile police brutality cases where officers didn’t face any charges at all. She acted swiftly and spoke out with intent:

“I will seek justice on your behalf,” she said in closing her remarks. “This is a moment. This is your moment. Let’s ensure that we have peaceful and productive rallies that will develop structural and systemic changes for generations to come. You’re at the forefront of this cause. As young people, our time is now.”

Over at Vox, they speculate about why she became the hero of Baltimore:

Some of the attention Mosby is getting is because she announced the charges faster than expected. People are also talking about her because she decided to charge the officers at all; in other recent, high-profile cases when police were involved with the deaths of unarmed black men, the officers were not charged. (See, for example, Michael Brown in Ferguson, Missouri, Eric Garner in New York City, and Tamir Rice in Cleveland.)

Mosby’s central role in a case that’s dominated national headlines for a week, combined with the enthusiasm of those who were surprised by her decision to charge the officers, immediately boosted her popularity. NPR reported that Mosley “had about 10,000 followers on Twitter in the hour after the speech; a few hours later, that number had more than doubled.” 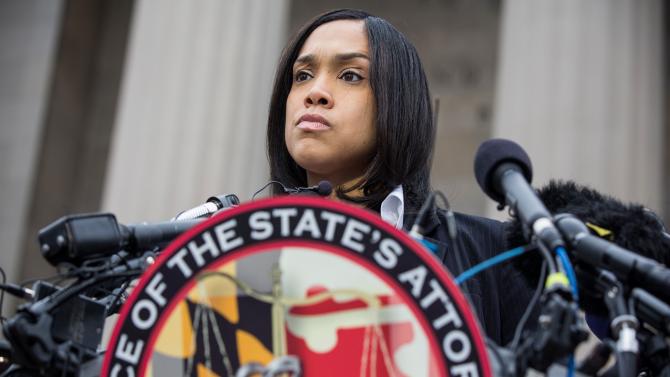 + Software designer Lauren Voswinkel launched a Twitter campaign called #talkpay last week calling for people to publicly publish their salary history in order to call attention to gender pay gaps, especially in the technology field. Voswinkel drew from her own experiences to create this campaign. She made a $55k salary for six years before she started lying about her salary history to future employers and eventually getting an enormous increase in her salary at her next job.“Knowing that other people were making that much money, and basically having the confidence to just push for it, was what I really needed to advance myself,” she said.

The issue came up again at a technology conference when Voswinkel had a conversation with another attendee who was barely starting out and didn’t know what to ask for in a salary. Voswinkel says she realized this happens because it’s taboo to talk about how much you make and frowned upon by companies. Workers have a right to talk about their salaries but half of employers tell them they can’t talk about it.

Voswinkel believes it’s even more important to put a face to a salary to understand and empower women in believing they deserve to be paid as much as their coworkers.

“When you actually have names attached to everything, and you’ve worked with people… or know them personally, it’s easier to say, ‘Wait, I’m just as good as that person and they’re making $30,000 or $40,000 more than me.”

“It can provide a concrete piece of information that is completely irrefutable for them,” she explained. “We can’t be afraid to talk about these things in order to push for higher wages for everybody.”

The conversation has been dominated by people in the tech field but people in other fields have contributed to the #talkpay hashtag. Emily Dreyfes over at WIRED talks about her experiences with pay inequality in the media world and about the powers that enable us to stay silent about how much we make.

“This aversion to speaking about money is not just harmful in the way it perpetuates inequality by keeping from workers the very basic data we need to negotiate with our employers on our own behalf. It’s also just plain stupid because it asks us to pretend that money is some kind of afterthought. That it is not, in fact, the whole point of employment. Of course it is!”

It’s important to note #talkpay hasn’t opened the discussion to include under-funded women-owned businesses. The hashtag conversation assumes companies are paying their employees as little as they can (which tech companies choose to do) which erases women employers and their struggle to pay their employees a fair salary because nobody wants to fund their endeavors.

Ladies and Gentleman, They’re Running for the President of the United States 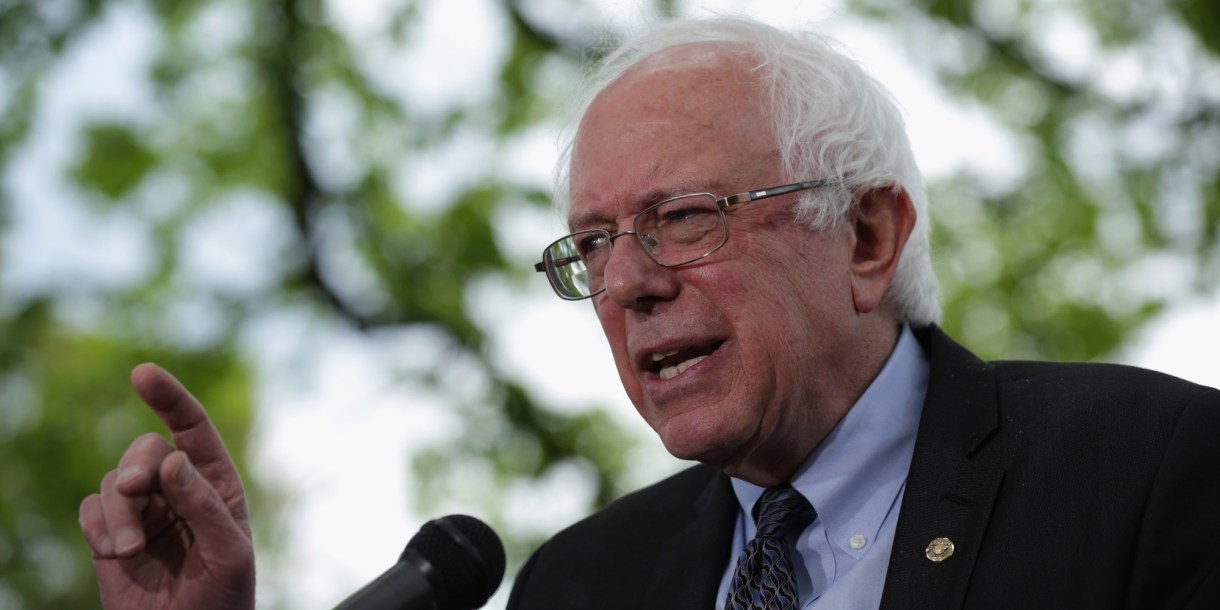 + Senator Bernie Sanders, a long-standing independent from Vermont, announced his candidacy for president as a Democrat last week. He’s Hillary Clinton’s first official rival for the party’s nomination. He emailed a statement to supporters that outlined his goals including “reducing income inequality, addressing climate change and scaling back the influence of money in politics.” His political career has largely focused on helping working-class Americans by elevating taxes on the wealthy and fixing income inequality. Sanders told reporters he faces big financial challenges against Clinton’s campaign but is optimistic about the future. A self-proclaimed “Democratic socialist,” Sanders says he’s the longest-serving independent in congressional history but wanted to run as a Democrat to avoid obstacles of getting on state ballots and participating in debates. His presidential bid is considered a long shot but could be useful to push Democrats like Clinton to address important issues, like opposing foreign military interventions, more deeply.

Sanders has been a staunch supporter of LGBT equality from the get-go. The Advocate reports his history.

“…Sanders has also been a steadfast and reliable supporter of LGBT equality, supporting the Employment Non-Discrimination Act when it passed the Senate in 2013 and even calling on President Obama to evolve already and support marriage equality in 2011. He’s a cosponsor of the federal LGBT-inclusive Student Non-Discrimination Act and has consistently voted against bills seeking to amend the Constitution to ban same-sex marriage, while cosponsoring a bill that would repeal the remaining portions of the so-called Defense of Marriage Act. Sanders has a perfect score of 100 percent on the Human Rights Campaign’s latest Congressional Equality Index.”

+ Rick Santorum, possible Republican presidential candidate, expressed his support for Bruce Jenner at a conservative conference during the weekend.

“If he says he’s a woman, then he’s a woman,” Santorum told reporters at the Iowa Faith and Freedom Coalition Saturday. “My responsibility as a human being is to love and accept everybody. Not to criticize people for who they are. I can criticize, and I do, for what people do, for their behavior. But as far as for who they are, you have to respect everybody, and these are obviously complex issues for businesses, for society,” he continued. “And I think we have to look at it in a way that is compassionate and respectful of everybody.”

Santorum is notoriously anti-gay, making headlines recently for saying he would not attend a same-sex marriage of a friend or loved one to calling LGBT activists Nazis to claiming the “gay agenda” has silenced the church. Like if he gets that Jenner’s trans, then like why can’t he get that some people are gay, bisexual or queer, and would he be as respectful of a non-rich-and-famous trans person’s identity as he is of Jenner’s? Did Jenner’s interview and coming out really change hearts and minds, or is it because Jenner is a Republican? Is this a turning point for conservative politicians that they realize that LGBT people aren’t going anywhere and we’re slowly but surely gaining more rights so conservatives just have to deal with it and accept it? I don’t know, what do y’all think?

+ Just in case you wanted to know, there’s been a shit ton of Republicans who have said they’re going to run for president and only a couple Democrats. The New York Times has a handy interactive infographic with more details. Here’s the rundown:

Republicans that are running:

Democrats that are running:

+ The formal gender-neutral honorific title Mx. is joining Ms., Mrs., Mr. as an option in official UK documents and is being considered to be added by the Oxford English Dictionary. Driving licenses, passports, banks and some government departments now accept the title Mx. on their forms. Oxford English Dictionary Assistant Editor Jonathan Dent said this is an example of how English can adapt to people’s changing needs.

+ A gunshot in Baltimore yesterday has tensions running high, although it’s still not clear what exactly happened. At the intersection of Pennsylvania and North, bystanders report police interacting with local Robert Tucker and hearing a gunshot before Tucker was carried away in a stretcher. Police claim the gunshot was an accidental discharge of Tucker’s concealed weapon and no one was injured, including Tucker; some bystanders say they saw police shoot Tucker in the back.

Residents said that the official account didn’t matter in the end because, by now, the trust is so broken between residents and authorities that the word of bystanders – who may or may not have seen the incident – is what will endure. All they know, they said, is that yet another encounter between police and a resident ended with a young man being hauled off on a stretcher. To them, the details are irrelevant.

“At this point, I don’t believe anything the police say,” said Chanel Lee, 20. “I feel like the police shot him and are doing what they did with Freddie Gray: get in a huddle and figure out something to say for the cameras.”

Shy’keira Cannon, 20, said the riots were just “play” compared to what will happen if there are no convictions in the Gray case. Then she stopped herself.

“This isn’t even about Freddie Gray,” she said. “My 3-year-old niece is afraid of the police and she doesn’t even know what the word ‘police’ means. Why should a child think that way?” 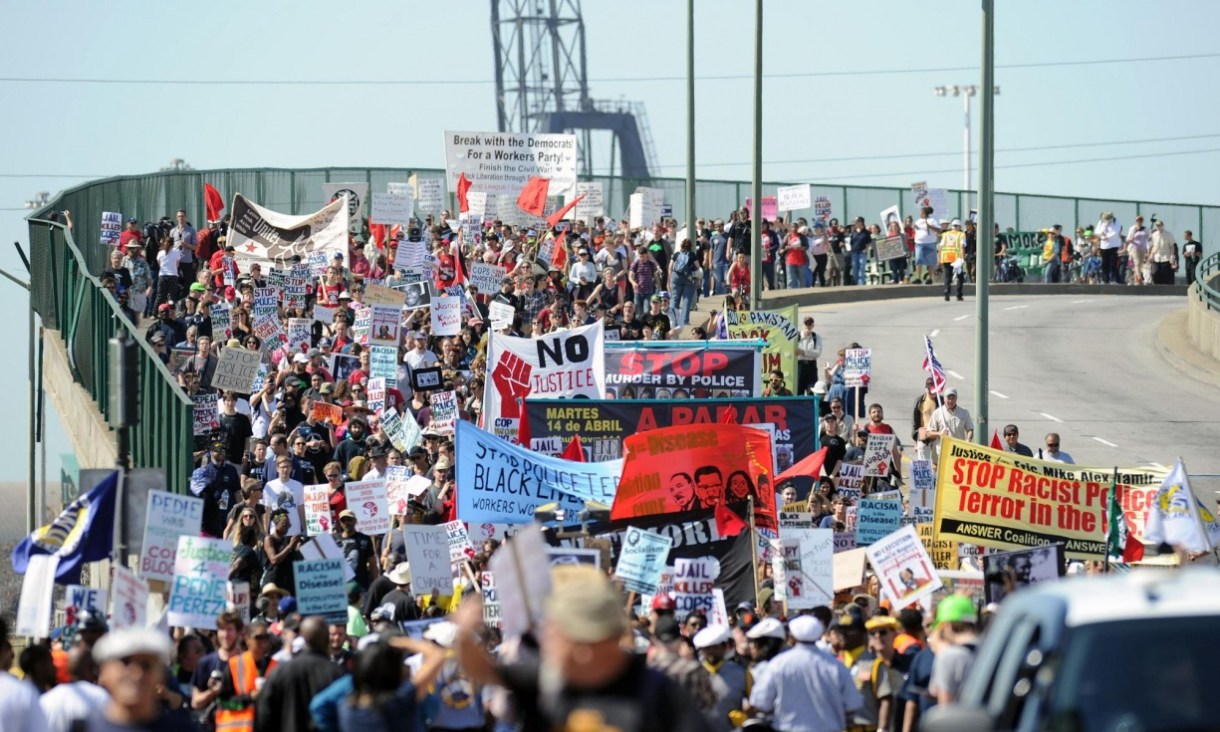 + May Day, aka International Worker’s Day, protests took place all over the world. Many in the U.S. were joined by protests against police violence.