+ In confusing news, the UK’s NHS will soon consider people with vaginal piercings to have experienced female genital mutilation, FGM. This would expand existing legislation, which says that “any action to cut or otherwise damage a female’s genitals is illegal unless there is a genuine medical or psychological reason to justify the procedure,” to include cosmetic surgery including piercings and labia reductions. Well!

+ New York state has been trying valiantly for years now to pass the Women’s Equality Act, a bill which would strengthen the rights of women in the state across the board. The hurdle has been a provision that protects late-term abortion rights, and this week New York legislators decided fuck it, let’s just can that one. Anti-trafficking provisions also had to be separated out into their own bill, although that separate bill was quickly passed. Mostly it’s just good to know that in a blue state in 2015, women still need to pinky-promise that they won’t have the Wrong Kind of Abortion in order to secure other rights. 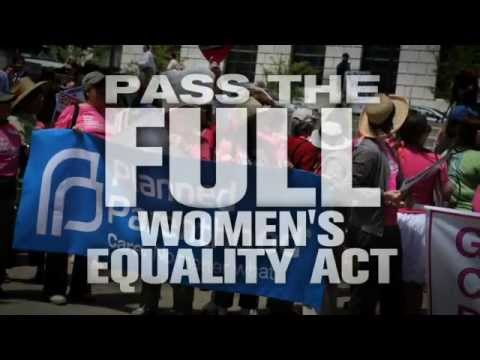 This is not what happened

+ Remember when Oregon elected its historic out bisexual governor, Kate Brown? Well Kate Brown has now seen Oregon become the first state that automatically registers its citizens to vote, instead of putting the onus on them to do so. Amid Republican hand-wringing about “voter fraud” (which research shows is very rare and about as valid a fear as your aunt’s concern about being struck by lightning while driving in the rain) and an overall climate of vote suppression and disenfranchisement, it’s refreshing. As professor of political science at U of Wisconsin-Madison was quoted as saying, “It just changes expectations for who’s responsible for making elections work.”

+ Dispatches from the War Against Religious Everything: Indiana is close to passing a “license to discriminate” bill which would specifically okay private business owners to turn away anyone who offends their religious beliefs. Indiana does not currently have a ban on discrimination in its books, which makes it even more notable that lawmakers there wish to intentionally protect it. Laws like this have been introduced in several states, and one was vetoed fairly recently in Arizona; the only successful one to date exists in Mississippi.

+ The Birth Justice Project has helped incarcerated pregnant women in San Francisco County Jail give birth with the support of doula services, and in 2014 was expanded to Santa Rita jail.

“Until 2012, pregnant inmates were shackled and could have no one with them during labor except the medical staff and deputies,” says Monica McLemore, assistant adjunct professor in UCSF’s Department of Family Health Care Nursing. “Our volunteer doulas offer services that many pregnant women take for granted.”

+ St. Patrick’s Day parades across the nation included historic amounts of gay representation this year, with LGBT organizations making their place proudly beside the green rivers and day-drunk twenty-two-year-olds. It’s worth noting, however, that this is far from a total victory:

John Francis Mulligan, a member of Irish Queers, a leading advocacy group for gay and lesbian Irish-Americans, said his organization was not satisfied with the inclusion of just one group in the parade.

“This is only significant in that it’s a back-room deal between NBC and the parade’s organizers,” Mr. Mulligan said.

The selection process, he added, has been cloaked in secrecy: “There’s no transparency about how this decision was made, no one ever responded to our application to march, and Out@NBCUniversal isn’t even an Irish group.”

So ultimately, the people holding the moral high ground here probably still aren’t any St. Patrick’s parade organizers, but still that one bar in Boston that banned the singing of Danny Boy. 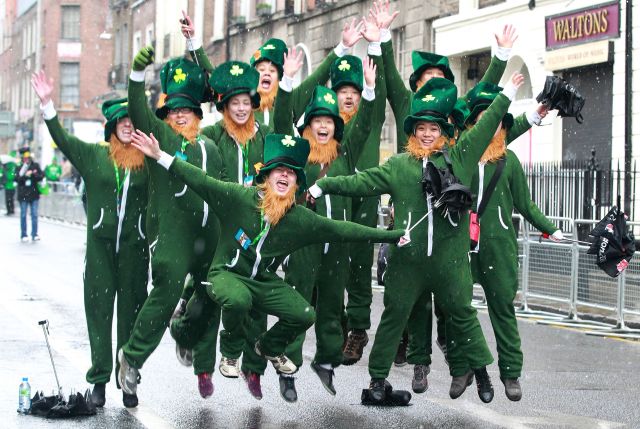 + In a somewhat unorthodox move regarding the upcoming Supreme Court arguments regarding same-sex marriage this summer, lawyers for several same-sex couples wrote the court asking that each state’s representative be given 15 minutes at the lectern when the case goes to court. It would be more traditional for one or two attorneys to represent the side, but hey, why not. As someone who followed the Prop 8 trials virtually second by second and is well aware of how much the tenor of a trial can be changed by an individual lawyer, I am THRILLED about this development let’s get it on the books.

+ Now we go to our Presbyterian Church correspondent, Audrey White, for this developing story:

The Presbyterian Church USA now officially defines marriage as “between two people” rather than necessarily between a man and a woman. Since June, when the general governing body approved an amendment to change the constitution to affirm marriage equality, local bodies called Presbyteries have gathered to vote on an amendment. On Tuesday, Presbytery of the Palisades became the 86th presbytery to vote in favor, pushing the approval percentage over 50 percent.

“I’m holding in my heart so many people who have worked for this for decades, prayed for this for decades. Some of them didn’t see it happen,” said Alex McNeill, the Executive Director of More Light Presbyterians. “I’m also holding in my heart all the folks in churches right now who haven’t gotten the message that God loves them just as they are.”

Presbyteries will continue to vote until June (Presbyterians take Democracy very seriously). So far, 41 Presbyteries have voted against the change.The PCUSA is one of the largest mainline Protestant denominations, with more than 1.8 million members in the U.S. Now, PCUSA clergy can perform marriages, and LGBT Presbyterians can formalize their partnerships in the churches they call home.

+ Oh hey GetEQUAL has created this very comprehensive bill of LGBTQ rights that you can sign. You can just go sign it for free on the internet! The same one that you’re on right now! Thomas Jefferson would be astounded, and also would probably have no idea what scissoring is, I’m just guessing here.

Ugh Are You Serious Right Now

+ In Staten Island, a lesbian couple is fighting sexual harassment in the workplace, filing suit against a coworker who made comments like “I had a dream about you two. I was making out with Nicole and you were watching,” and the boss who didn’t take appropriate action against him. May this suit and every one like it be victorious, because we still live in a world where being gay means you’re subject to homophobia/lesbophobia and ALSO the harassment that men subject straight women to.

+ Joke’s on the University of Alabama, because Elliott Mitchell and Clark West were going to pass on their multimillion dollar estate to the school before the school just INSISTED on being a stalwart stronghold of homophobia. The couple had wanted to create a community outreach center partly (just partly!) for LGBT students, and the university didn’t respond with enthusiasm; when they wrote a letter letting the university know that this decision meant losing between 15 and 18 MILLION dollars, the school didn’t even respond. I’m sure the students will be fascinated by this anecdote and what it says about the university’s values when they’re paying for their own printing in the campus center, working two jobs in addition to their full class load, and scrambling for financial aid.

+ Bisexual activist Marcia Diehl was killed this week as she was struck by a truck while biking home. Diehl had co-founded the Boston Bisexual Women’s Network, enjoyed recognition as a singer-songwriter, and volunteered at a local LGBT theater company. 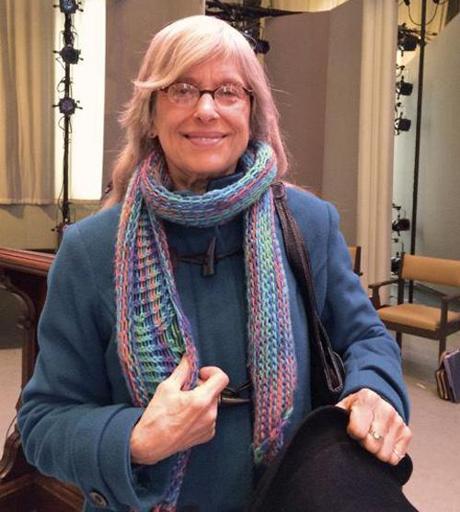 + As battles over same-sex marriage and rights in general continue in Alabama — see above — one particularly notable development is an amicus, or “friend of the court,” brief submitted by the state that says we can’t let same-sex couples marry because children. Specifically, the brief argues that “marriage is a natural reality and that same-sex marriage destroys the ‘rights of children to be connected to their biological parents.'” That passage from the Song of Solomon is coming back to me now: “O, how fortunate that we are joined together in this rigidly logistical natural reality, that I may drink of our marital bliss as though from a goblet of wine.” Seriously though anyone who thinks that’s gonna be meaningful to the Supreme Court should be required to read the Prop 8 trial transcripts until their eyeballs fall out.

+ HEY so you know how for some cis people, the absolute worst thing they can imagine is a trans person getting to use the bathroom that matches their gender? Missouri is trying a RADICAL NEW STRATEGY to accomplish that aim, which is to try to abolish gender-neutral bathrooms. There are actually two separate bills — HB 1338 would require that any bathroom that isn’t intended for use by one person at a time be divided by gender, and HB 1339 would prohibit the use of state revenue to create gender-neutral bathrooms “unless required by a federal or state court order.” This is neat because it’s so upfront about its intentions: it’s like commissioning a banner that says “We’d like to make sure that people who aren’t cis have the most challenging, dangerous possible environment to pee in, and we’re willing to use a whole bunch of legislative dollars and time to make sure of it.” So that’s where we’re at! That’s the world we live in.

+ Just yesterday UVA student Martese Johnson was brutally beaten by Alcohol and Beverage Control agents as he attempted to enter a local establishment with what was allegedly a fake ID. He sustained a head injury requiring 10 stitches in addition to numerous other physical injuries, injuries which stand in sharp contrast to the notable absence of injury I’ve ever seen a white person sustain when trying to use a fake ID (which I feel comfortable saying I’ve seen fairly often). The charges were that Johnson was “arrested on charges of resisting arrest, obstructing justice without threats of force, and profane swearing or intoxication in public.” UVA President Teresa Sullivan issued a vague statement about the incident, saying “We have not yet clarified all of the details surrounding this event, but we are seeking to do so as quickly as possible.” UVA students have rallied and marched in their community. A separate statement from Marcus L. Martin, the Vice President of Equity & Diversity, and Maurice Apprey, the Dean of African-American Affairs, read “This was wrong and should not have occurred. In the many years of our medical, professional and leadership roles at the University, we view the nature of this assault as highly unusual and appalling based on the information we have received.”