Kaci and Holly Clark-Porter met as students at Austin Presbyterian Theological Seminary in Austin, Texas. When they decided to get married, they grieved at not being able to have their commitment ceremony in the school’s Shelton Chapel. After a landmark vote in the Presbyterian Church USA General Assembly Thursday, gay and lesbian couples may now be able to have such ceremonies in Shelton Chapel — and marry there, once Texas legalizes gay marriage.

The assembly voted 429 to 175 to change the denomination’s constitutional definition of marriage from “a man and a woman” to “two persons.” To become church law, a majority of the church’s 172 presbyteries (collections of churches grouped based on geography) have to approve the measure. In the meantime, pastors in equality states are empowered to perform marriages starting tomorrow when the assembly closes.

“It reaffirms the covenant and promises that congregants make to provide for, nurture and support this baptized person throughout their whole life,” Kaci said. “For a lot of people, marriage is a part of that journey. Everything is aligning, and the church can now live more fully into that covenant.”

A similar vote failed narrowly in 2012. Folks like Alex McNeill, the executive director of More Light Presbyterians, have been working tirelessly since then to ensure a different result this time. If presbyteries vote to change the constitution, the denomination would become the largest in the U.S. to affirm same-sex unions.

“I am amazed by the work of the Holy Spirit in the General Assembly this week,” McNeill said. “Many people have thoughtfully discerned where God is calling this denomination and that was evident by how respectfully the conversation on marriage unfolded. I am feeling grateful to my denomination for recognizing what we have long felt from God: that same-sex relationships are blessed to be marriages.” 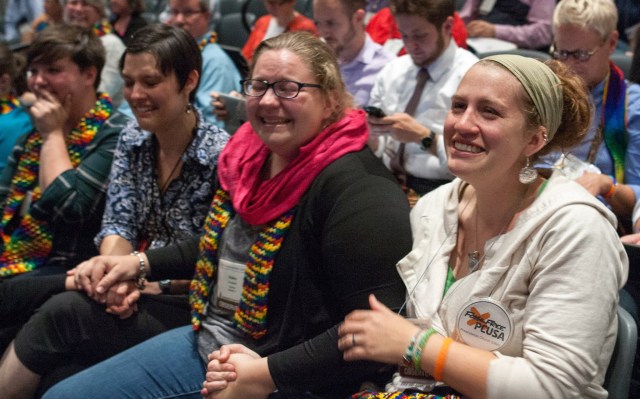 Folks react to the PCUSA vote on Thursday. Photo by Ray Bagnuolo

The vote does more than allow marriages. It establishes the PCUSA as a faith home for LGBT people and affirms that we are beloved by God and part of families of faith. It will hopefully empower churches to work on other issues affecting justice for queer people and all oppressed groups and create space for dialogue on queer theology and the role of faith in queer people’s lives.

Although the church as an institution has frequently and viciously rejected queer people, McNeill, who is transgender, said his faith made him feel less alone when he struggled with his gender transition.

The church faces a difficult road ahead. It’s predicted that many members and churches will leave the denomination. Since 2012,  about 140 churches have joined ECO, a Presbyterian denomination created by churches who felt the denomination was becoming too liberal, in part a response to the church’s 2010 decision to ordain gay and lesbian clergy. Even in this moment of celebration, there is grief at what will be a very difficult road for congregations and members whose theology conflicts with the decision. But denomination leaders will work to help the church stay whole and move forward into a new stage of its life.

“The apostle Paul tells us that ours is, in fact, ‘the ministry of reconciliation’ as ‘ambassadors of Christ,’ and he died for us so that we might be reconciled, that we might become reconcilers,” said  Jeff Bridgman, who moderated the Marriage and Civil Unions Committee at the assembly.

For denominations like PCUSA, there’s a lot more to it than just voting to affirm gay marriages, said Alison Amyx, a senior editor at LGBT Christian organization Believe Out Loud.

One of the general challenges is going to be for people to look beyond just opening the doors and to really see what that means, especially for the denominations that are more progressive. Just because you are affirming and welcoming doesn’t mean you know what to do [when] a trans person walks through the door. They have to go deeper. It’s not just a stamp of approval, it should be integrated into the life of the congregation.

So the work of More Light and other groups will continue. Holly and Kaci are in the process of creating Big Gay Church, a national organization based in Delaware that will be a resource for LGBT Christians and those who love them. They both faced challenges as queer Christians — Holly was disowned from her family at one point, and Kaci struggled as a college minister at a less-than-open congregation. Now, they have the opportunity to ease the journey for others in the future. 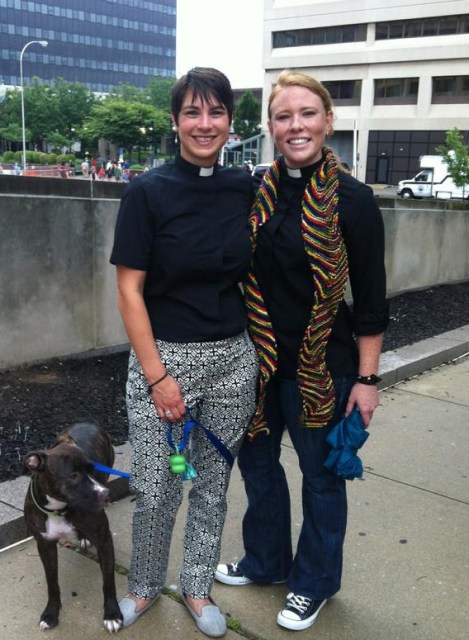 “I’ve got this grant, I’m paid to do something interesting,” Holly said. Originally, she didn’t plan to use the grant from 1,001 Worshipping Communities to create an LGBT based project, but Kaci helped her realize that’s where her call was. “We like to think of ourselves as pastors who just happen to be gay, but that’s what people want to talk to us about, and that’s who seeks us for pastoral care.”

As more people, congregations and denominations are acknowledging that Christian and queer are not mutually exclusive identities, such work will become even more necessary.

“As we work to update our Book of Order in the coming year, we will also work to help our congregations think deeply about what welcome feels like within their congregations and how they as people of faith can make a difference for LGBTQ people in the communities where they live,” said McNeill.