This post is part of Still Wading: Forty years of resistance, resilience, and reclamation in communities of color, a blog series by Strong Families commemorating the 40th anniversary of Roe v. Wade.

I have a photograph of my mother that I love. She is 21 standing in her graduation gown beaming expectantly at the camera. Round belly poking through dark drapes, it’s the first portrait of us “together” — me nested inside of her, a sliver of white pressing through the black folds that usually conceal its opening. As if I am graduating too. At this threshold you can see that she (we) just barely made it to this moment. While I irrevocably altered her life, she was fortunate that I arrived in the world about a month after her commencement.

My arrival was not a given. I came at a time of great change, upheaval, and risk, born in 1968, five years before Roe v. Wade became law. Politically the world was volatile and in the throws of great social movements. Two important leaders—King Jr. and Kennedy—assassinated.

My mother did not want a baby. With her eyes set on international relations she was ambivalent at best about her relationship with my father. I was not the plan, and so, like many young women of her time and class, she sought a way out.

She found a doctor in another town who performed abortions. In my mind she had to climb a dark stairway, grey with creaky steps, to get to the door. My father was with her, and still it took great courage for her to get to this point. But the doctor refused to let her in, or even acknowledge what was about to happen. He told her to come back alone. The feeling of the place and the demand that she come back alone scared her. She turned around and decided that she could not go through with it. Several months later I arrived.

Growing up I always had an inkling that there were pieces of my story I was not putting together. It wasn’t until I was 21 and pregnant, like my mom had been , that I was ready to wrestle with it. Despite identifying as queer and primarily attracted to women, I found myself in a relationship with a man and pregnant in Northern India, far from home. Like my mother, I too had big, emerging plans for my life that did not include a baby at this age. I assumed I would have an abortion when I got back to the U.S. Instead, just before I left India, I had a dramatic and humbling miscarriage.

The experience created an opening between my mother and me that allowed for deep honesty. We shared stories as equals—feeling the circularity and changes of time. While happy to be alive, I was sad my mom had been in that position in 1968. Twenty years of marriage to my father, an abusive and dysfunctional relationship, forgoing her dreams—it all seemed like something that did not need to happen. I did not take personally the idea that I could have been aborted.

I didn’t know that the story, my story, and the nuance and questions about choice would get even more complex with the coming of my son fourteen years later.

Like many lesbian couples, my partner and I were faced with the other side of reproductive “choice” on our road to parenthood. After years of planning, looking for a donor, changing our plans, then trying to conceive, Adrienne became pregnant. I was elated, scared, and deeply aware that my life was about to change.

The early stages of pregnancy were fairly typical. As Adrienne’s body was transforming, I continued my work in youth development and organizing. During this time I became close to a group of young activists who all had disabilities and worked together through a group called Kids as Self Advocates (KASA). They opened my eyes to a new community, perspective, and questions about choice.

The KASA youth were all individually powerful, bright spirits. Getting to know them opened my eyes and heart to think about how medical practice, the deep cultural value of “individual choice,” and our fears lead many of us to abort babies with disabilities. Through abortion we edit our society — and experience — of humanity. I began to question why we choose to keep some babies and abort others, and I considered what I would do if my child had a disability.

Adrienne and I went to the required class for prospective parents of children with genetic disorders and procedures to terminate pregnancies. As a queer person, I was disturbed by how many disorders highlighted in the class simply altered the sex of the child. I had a sinking feeling that this medical and cultural practice was also about editing out intersex babies from our population. I thought about sex selection practices around the world. The parallels made my head spin.

Despite growing skepticism, a series of events led us down the path of pre-natal testing. A small sign in the ultrasound led to more screenings and then to amniocentesis. It was intuition as much as clear medical evidence that ultimately landed us in the waiting room with doctors from Kaiser’s genetics department. Our child had Down syndrome. Stunned and disoriented, we were unsure of our next step.

We had pushed testing back. Now we only had seven days until the 20-week mark when the fetus is considered viable. I would be lying if I said I did not feel pressure from the medical system, and elsewhere, to abort. So we did what I hope anyone would do. We left town, stayed with close friends, called our wisest advisors, and searched for the answer that felt right.

That weekend was among one of the most vivid in my life. We talked with friends and took long walks. We each imagined what it would feel like to have this baby, versus abort it. I realized I felt more connected and open to life choosing to welcome him into the world. We agreed, even though it was scary and unknown, choosing Jonah felt like inviting life and love in.

The words “pro life” have been pitted against “pro choice,” as if they are opposites. In my experience it’s a false dichotomy, and while politically difficult and messy, our truths are much more complicated.

We left that weekend having made the choice to have Jonah. The power of making this choice is that we knew, our community knew, and the medical team knew that we were welcoming him into our life. This made all the difference. I could see it the moment he was born and the entire team—midwife, nurses, doula, even the doctors—were jubilant. You can see it in the photos. There was no doubt, no hesitation, no fear or grief present in the room.

This is not true for many families who give birth to babies with obvious disabilities. Often a sense of mourning, shame, anger, and guilt sweeps over the room instead of joy. But this is not the baby’s problem, or the mother’s or the families’. It’s ours.

After he was born we struggled to find community. Many of the parents who choose to have kids with Down syndrome and genetic disabilities are devout Christians. Other communities secretly (or not so secretly) cannot understand why you would “choose” to have a child with Down syndrome. The magic for us has been trying to find people who will be courageous enough to walk a different path with us.

I cannot describe the gift that it is to have Jonah in my life, although it has not been easy. Sometimes the gulf between my own experience and “typical” parents is the same as that between parents and non-parents. And yet, on a fundamental level it’s also the same joy and the same challenge that we all face. 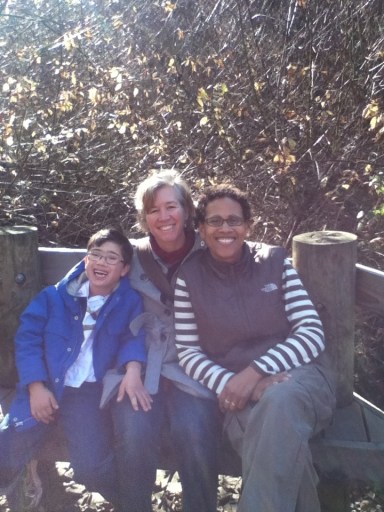 In Jonah I have learned to see the light of a child’s spirit, the patience and full acceptance that allow him to thrive, the ways my own baggage gets in the way, and the gifts, brilliance, and love embedded in each one of us. Jonah is smart, funny, and deeply curious about other people. He is an emerging actor, DJ and musician in his own right. At 7 going on 8, he is reading and writing, learning math, ice-skating, and attempting to ride a bike. He is part of a family and a community who loves him and whom he loves. He has introduced me to my own joy, deepest sense of love, connection, and self-acceptance. Is there anything else that is important?

As the years pass and Jonah grows, I encounter the same fundamental lesson of parenting, a lesson my mother had learned many years before: we do not know who our children will be or what they will teach us; but we have our own stories and expectations of who they are and who they will be. The more we try to control or alter this, the further apart we become. The more we accept and embrace who they and we really are, the more magic and life we are able to embrace. Some of us get this lesson early and often; others bump up against it unexpectedly or resist it all together.

For Jonah and all of us, I long for a world that values humanity, one that supports us to thrive together—not survive individually, one where we value difference as part of the natural condition of things and where we see our choices as part of something larger than ourselves.

Kristen Zimmerman is a writer, trainer, and consultant focusing on movement building and social transformation. She lives in Oakland, California, with her wife Adrienne, their son Jonah, and their wonderful network of chosen family.