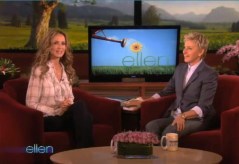 Newly out country music star Chely Wright visited The Ellen DeGeneres Show last week and it was pretty f*cking awesome — she talks about how she viewed “The Puppy Episode” of Ellen’s sitcom with her father (she happened to be at home for a funeral when the episode aired), how Ellen’s Mom’s book (Love, Ellen : A Mother/Daughter Journey by Betty DeGeneres) impacted her and consequently helped her father understand Chely’s journey and oh you know, just watch it, it’s so cute:

Chely Wright: I searched my entire town of Wellsville, Kansas, for anyone who was like me. And I couldn’t find anyone.
Ellen DeGeneres: It’s a scary place to be isn’t it? And I think that’s why it’s important for people that have this platform to be a representative, because there are lots of people out there who feel like ther’es nobody like you — there’s LOTS of people like you. People who say it’s nobody’s business, nobody needs to know about it — there are kids out there getting bullied at school, and getting killed. So I think it’s a good title.
Chely Wright: I felt–I’ve been making country records, and I just released my seventh album — I don’t know if there are any country music fans in the audience — but by all measure they do like me, and they’ve given me awards, and they’ve given me hit records, and I felt that it’s really wrong of me to let them assume for one more minute that I’m not gay. Because there’s 14-year-old girl or a 15-year-old boy sitting in his bedroom feeling like an alien in some little — I know there has been so much progress made, thanks to you, thanks to people who have stepped forward in tougher situations than mine — but there’s a reason no country artists have come out, and I can’t — it felt criminal to not allow people to know my entire truth. I am the girl you always thought I was. But I happen to be a lesbian as well, and I always have been.

Though there’s much made of Ellen’s ability to “transcend” her homosexuality and be popular in spite of it. We’d like to suggest — that much like Oprah Winfrey — part of Ellen’s success is due to what makes her different from previous talk show powerhouses like Phil Donahue. As an African-American woman, Oprah’s capacity for compassion and empathy, as well as the humility inherent in anyone who’s had to fight against the mainstream for acceptance and success — and won!, makes her so f*cking good at what she does.

And how often do we get to see two queers on TV at the same time? Whether it’s Adam Lambert discussing the AMA controversy, Chris Colfer talking about getting bullied in school, Lindsay Lohan processing a public lesbian breakup, Wanda Sykes talking Prop 8, you know that Ellen gets it, and that makes the moment far more touching than it is when Phil Freaking Donahue (or ‘Dr’ Phil for that matter) is listening to the story from their vantage point of straight white male privilege.

Of course our favorite (biased!) interviews are Ellen-Gaga, because Lady Gaga has so much fucking respect for Ellen, she acts giggly & enchanted in a way she doesn’t do with other interviewers. One of the top ten moments ever of our life, clearly, when she bursts out with, “I love you so much! I’m so happy to be here, I really love you, it means more to be on this show than anywhere, I look up to you so much. So thank you for having me… you’re just such an inspiration for women and for the gay community.”

Drugs for the apocalypse, librarians for Gaga…