There’s a new Tumblr speaking to my heart these days. Cats Against Catcalling combines cute meme pictures of cats with blunt quotes about how not fun it is to be catcalled or harassed in the street. There’s something about seeing a picture of a cat with common sense slogans about not yelling obscene things at us that makes these balance on the fence right between cute and awesome. By tapping into the cat meme that is ever so present on the interwebs, Cats Against Catcalling is creating an accessible message that street harassment isn’t appropriate behavior. 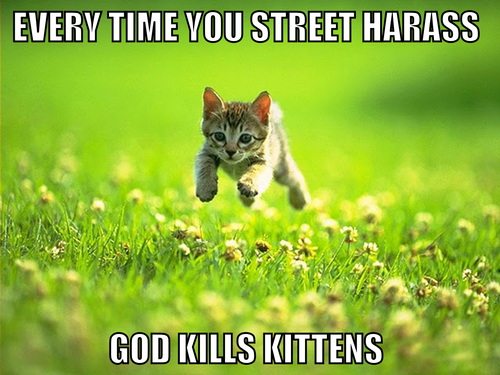 via {Cats Against Catcalling}

Hollaback is behind this awesome Tumblr and although we’ve talked before about how much we love this group, I think it needs repeating. Hollaback takes a stand against street harassment, calling out the “culturally accepted as ‘the price you pay’ for being a woman or for being gay” way of thinking.

Take, for example, my most recent experience with street harassment. There I was at the grocery store when some man tells me to “smile, baby. you’d be so much prettier if you smiled.” I wanted to tell him I was only at the store because I needed some fucking dark chocolate for my terrible cramps and therefore didn’t feel like walking around with a damn smile on my face so I’d seem more attractive to him. I just uncomfortably grimaced and walked away with my chocolate. I wish I had one of these cat pictures printed out to throw at him. That’d show him! 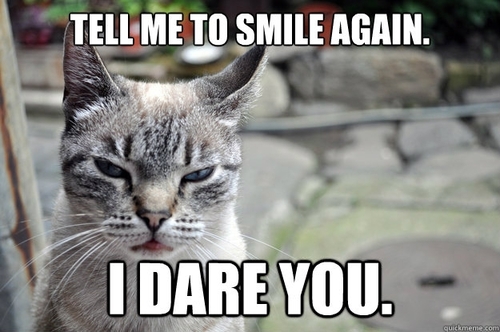 An accurate representation of me at the grocery store.
via Cats Against Catcalling

Street harassment happens to everyone, but it doesn’t have to. It’s upsetting and degrading and I’m glad Hollaback is making a firm stance and saying this needs to end, especially when that includes putting cute cats with the message, obviously.

Hollaback invites submissions of stories of harassment in an attempt to inspire individuals to take action against being harassed, whether that be shifting public opinion or speaking to elected officials in areas with a high number of incidents.

You can also submit to Cats Against Catcalling with your own clever taglines by emailing holla[at]ihollaback[dot]org.