Remember that time you were walking down the street in your high-waisted blue shorts and some dude just started yelling advances at you? Or that time you were with your friends and a grown man put his hands on you and pulled you toward him? Or maybe the time you were alone on the metro going to your internship and a 30-something asked you to be his wife and where you were going and could he come?

Did anyone say anything?

Street harassment is an epidemic that I am confident you’re familiar with, even if you don’t call it by that name. It’s men calling you “shorty” when you walk by and whistling at you when you’re just trying to get Starbucks. Or being groped, touched, or otherwise harassed on the red line when you’re only two stops from home and you just don’t get why being a chick sometimes means dealing with these assholes. 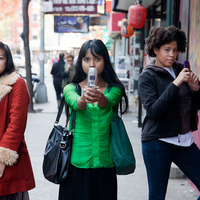 Hollaback! encourages anyone facing street harassment to report it and map it via a mobile device.

Hollaback! has been expanding the movement to end street harassment since last summer, when I hopped on board for their national launch and helped them to reach the social media universe. I wanted to be a part of something that would end one of the shittiest experiences I have as a woman in an urban environment. Being a woman shouldn’t have consequences. And no matter how you’re dressed, or where you are, you should feel safe there.

Originally, Hollaback! started by mapping street harassment on digital maps that updated in real time. They collected stories and published them. They proved that street harassment was a real problem. But after reading through the stories, Emily May, founder of Hollaback!, realized that over 15% of them talked about the “bystander effect.” People don’t intervene. Sometimes, people actually leave when they witness street harassment. They are launching the “I’ve Got Your Back” campaign in reaction, to show bystanders how to intervene and to celebrate when they do. Hollaback! wants to build a world where we all have each other’s backs.

The Green Dot program, which is partnering with Hollaback! for this particular campaign, is an excellent bystander intervention training program that delineates and breaks down the steps to successful bystander intervention and empowers attendees to become more active bystanders. Because change doesn’t come from one person doing everything, it comes from all of us doing something. And if we all spoke up — and if we all had each other’s backs — we might find ourselves participating in a culture where street harassment doesn’t exist, because we don’t allow it to. We have that power, but only if we work together.

You can get involved by donating to their Indie GoGo campaign.