Last May we said a bittersweet goodbye to network television’s longest running lesbian character, Grey’s Anatomy’s Dr. Arizona Robbins. In an evocative final episode, she left Seattle and her job Grey Sloan Memorial Hospital to set her sights on New York. Awaiting her was a new job heading a prenatal research clinic, a new home for her daughter, Sofia, and a promised off-screen reunion with her ex-wife, Dr. Callie Torres.

That is, until the fans said – Not yet. 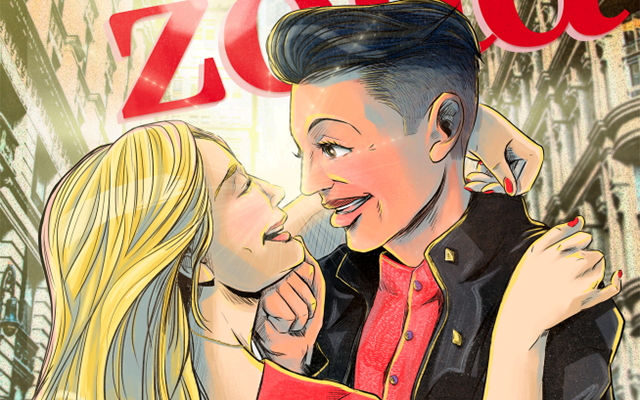 “The idea came about in April,” said Calzona Comic lead writer Jade Spratt. “It was around the time we found out that Jessica Capshaw was being let go from the show. I realized that I probably wasn’t going to see Calzona (fans’ portmanteau for Callie and Arizona) be endgame. Many of us wanted to see them end up together, as two strong women who had given a great deal of people representation and hope. With my love for comics and wanting to give fandom this sort of last ‘hoorah,’ I got excited, asked around, and it sort of kicked off from there.”

Jade built a team of super fans, including artist Elisa, creative consultant Ana, and coloring assistant Paulina. Together they developed The Calzona Comic Project, a magnificently drawn and thoughtfully written full color comic book that’s currently available for free download in five languages! Despite being a long-time fan of comics, Jade had never directly worked in the medium before. Still she knew this was the best path forward, “I thought that seeing it visually, even if drawn, would bring us so much closure.” 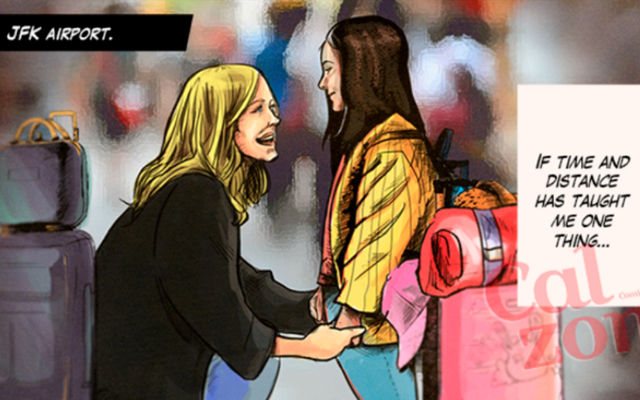 Even with an emotionally resonant workaround in the show’s Season 14 finale, where Sara Ramirez’s rendition of Brandi Carlile’s “The Story” played as Arizona made the final decision to rekindle her relationship with her ex-wife – the couple was unable to physically reunite on screen. Conflicts between ABC and CBS, the network of Ramirez’s new job on Madam Secretary, made it difficult for the star to return. Over the summer, Grey’s Anatomy creator Shonda Rhimes told fans, “We tried. CBS has a hold on her… and we can’t get her. But we love her. Always. This is her home.” Though, Ramirez has since stated that CBS would be open to her guest starring as Callie, should the opportunity arise.

The Calzona comic picks up at the exact moment not able to be shown on screen, Arizona arriving in New York and finding her way into Callie’s arms. In a few short pages, Spratt and her team tap directly into what made Callie and Arizona so special to each other, and to their fans. It’s a work of pure love that weaves a tale around your heart. My adoration for Callie and Arizona’s relationship is well-documented, so I’m clearly biased in this regard, but after reading the comic once, I found myself scrambling to read it again. I wanted to commit every frame to memory. This was the ending I imagined for the couple, one that before last week only existed in my mind’s eye. Something I couldn’t quite reach with the ends of my fingertips was now tangible and right in front of me. That’s the mark of excellent storytelling, whatever the format or creator.

One of the most striking elements of the comic was the creators’ decision to honor Sara Ramirez’s current haircut in their depiction of Callie Torres. Ramirez famously shaved her hair after leaving the iconic role and directly before coming out as bisexual in 2016. There was some fan pushback to this decision, but the team felt strongly that they needed to pay respect to who Ramirez is now, as opposed to old memories of Callie. “We decided keeping [her hair] short would hopefully inspire and change some ignorant minds,” Spratt, like many queer women, has her own thick, curly hair buzzed at the sides. 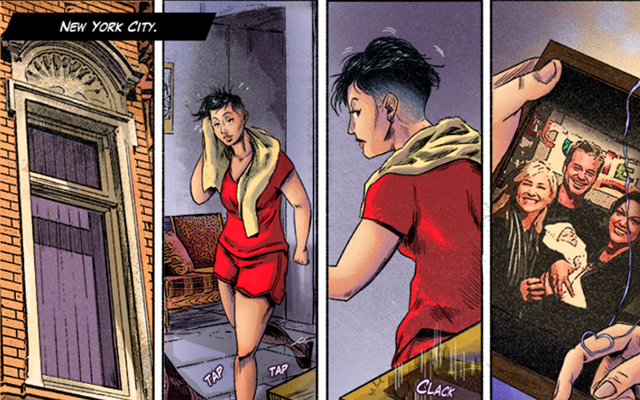 As Grey’s Anatomy enters a rarely heard of 15th season this week at it’s usual time slot (Thursday, 8pm, bring your Kleenex!), the show has been increasingly embracing fan art. Ahead of it’s premiere, Shondaland productions, along with Popsugar and the THINK 1994 Museum, commissioned a pop-up amateur art exhibit in Los Angeles focused on the show. The premiere was attended by various cast members. Still, the Calzona Comic’s grassroots nature stands on its own. It’s funded by fans, and being made available as widely as possible for fans. Its restorative call to purpose – giving Callie and Arizona a “happy ending” they were deprived of on screen – is fandom distilled into it’s best and most unadulterated form.

For those who are not well versed in fan culture, it can feel shocking that this kind of professional level art would be made available for free, but for Spratt this was an act of gratitude. “This fandom saved my life,” she told me. “I can honestly say I wouldn’t be alive if it weren’t for this. I’ve had a community of people that understood me. Callie and Arizona gave us hope…. I want people to know how much representation matters. It’s rare that we see a women couple get their ‘happy ending’ and it’s rare that a community like this can come together to create something so meaningful. I want people to know that it’s OK to be who you are, to love yourself, because you’ll find your community and people that love you, like I have with this team and this fandom.”

It’s a powerful sentiment. One that’s echoed by Shonda Rhimes. At a 2015 HRC banquet she said of her work, “You should get to turn on the TV and see your tribe. And your tribe can be any kind of person, anyone you identify with, anyone who feels like you, who feels like home, who feels like truth. So that you know on your darkest day that when you run, there is somewhere, someone, to run TO. You are not alone.”