This morning, at the 40 to None Summit to benefit LGBT homelessness, the gorgeous and talented Sara Ramirez showed up to introduce us to her fantastic new buzz cut and her intersectional truth: she’s the multi-racial daughter of immigrants, and she’s bisexual. 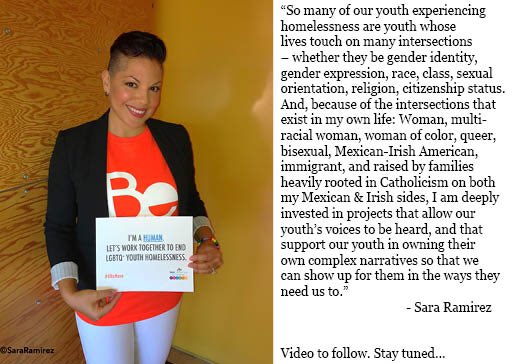 Anyone else just burst into tears? No? Just me?

Most of us know Sara as Grey’s Anatomy’s Callie Torres, half of Calzona, one of the longest running queer relationships on network television. Callie was the first person I ever heard use the word bisexual on the teevee. She made no apologies for her truth, and loved with abandon. She meant so much to me. She inspired me; she brought me comfort. The curve of Callie’s path as a bisexual woman helped me understand and embrace my own bisexuality, and I was gutted when she left the show. I haven’t been able to bring myself to watch it since. But today, seeing the amazing woman who brought Callie so much passion stand up in her truth, embrace her intersections, and use her voice to bring awareness to the cause of LGBT homelessness, it’s almost more than my cold black heart can handle.

Shit is tough right now, you guys, but today, in this moment? Sara Ramirez is an out, queer, woman of color, and I for one couldn’t be more thrilled.

What a year for bisexual visibility!

UPDATE: The True Colors Fund has released a full video of Sara’s speech. (Get ready to cry again.)