My articles have always risen from singular experiences that brought to light something about my butchness. Sometimes it’s a quick comment, or the way someone reacts to me. In this case, it was a song by The National called “Slow Show.” I was listening to the lyrics for the first time in a long time, even though it’s a song that iTunes tells me I’ve heard 93 times. Sometimes you hear a song so many times that you’re not hearing it anymore, and last night each word was louder than ever.

I wanna hurry home to you / Put on a slow, dumb show for you and crack you up / So you can put a blue ribbon on my brain / God, I’m very, very frightened / I’ll overdo it

I listened to the song and realized how many times I’ve felt that exact ache, and how it is so closely tied to my insecurities as a masculine-presenting person, as a queer kid whose desire started out all bunched up. My desire is still bunched up sometimes.

I’ve already talked to you about butch emotions, about being a tender-hearted creature who’s been told to wear armor. I’ve talked about the strange combination of masculinity and vulnerability, of trying to navigate a queer gender expression when society has already come up with its own ideas of what that expression means. Now I’m going to tell you a story. Consider this a queer fairy tale where the characters are familiar, maybe even roles you’ve played in your own life. If there is a knight in shining armor, her visor is cracked and she’s misplaced her sword. She’s got the wrong key to the princess’ door. There are dragons, but they reside in the knight’s belly.

Falling for straight women, for unavailable women, is the story of my life. It’s the truest story of my goddamned life, and what I’m about to say is me revealing a lot of deep insecurities. I’m not stating anything political, but speaking from my heart in the most shaky voice that my heart’s got to give, so bear with me.

You know that thing, that achy singular thing, where you fall for this beautiful woman but she’s straight, or at least she identifies as straight? Maybe she talks about men and maybe she doesn’t, but you know that she’s spent her life learning the desire of something you tell yourself you can never really be all the way, even if you’re straining with all your might, especially if you’re straining with all your might, especially if you’re straddling that gender or somewhere in between genders, especially if it’s something you’d want to be or want to be better than. You tell yourself that if you were a “real man,” she’d want you. If you weren’t weird, she’d want you. If you had different parts, and looked more like that man over there or that man on that ad, she’d want you. If you were just ever so slightly changed, she’d want you, and it plays into all your weaknesses, all your insecurities, all the little fault lines around your heart.

Maybe she likes you back. Maybe she wants you back, maybe she says she’s attracted to you but she’s confused, but you doubt yourself anyway. Because why would she want you, broken rough-edged you, when she could be “normal”? Why would she want to be with you when she could be with a nice man that her mom will like? Why would she choose you when she could choose him, someone that she can take home to her family, that she can marry in a big field with flower girls and a ring bearer. Everyone at that wedding will be happy because they’ll feel like she’s safe with this man, she’ll have a beautiful life with this man, someday she’ll have babies in the image of this man and of her and of a future that doesn’t involve shame, confusion, having to jump through hoops, having to lose family or friends, having to make sacrifices and tough decisions just to hold a hand on the street. She could be normal, she could be blissfully normal, and all you have to offer is a pair of empty palms with the lines all out of order.

But god, you can do things with those palms. That’s what you wish you could tell her when you’re staring at your shoes or finishing that drink or pretending there’s nothing else to say. You can do things with those hands and those fingers, you’ve spent a lifetime in bedrooms preparing for a body like hers. You learned to love her on a sea of skin and spines that spelled out “soon, you’ll meet her soon,” and you want to show her with your own skin, your own lips, your rough and soft edges, that you can give her something no one else can. You learned how to desire and pleasure in your own way, and you want to show her life through that pleasure. You want to turn her towards your window and let her see the view.

There’s this thing about those of us whose bodies and desires are different from everyone else. It’s that when we kiss, we kiss like we know there’s a fire lit underneath us. We kiss like our mouths are the gateway to the other side of life, the side that will save you, and we’re just trying to get you to heaven, sweetheart. We know our bodies can bless you, invoke you, and we want to show you that our spirits may be crooked but they’re angled just right to let all the light in.

Realization dawns: if I could just let my body talk, my insecurities might be silent. If I could show her in another way, I might not hear my doubts anymore. But that’s not how it works, and maybe I’m not giving her enough credit, maybe the little dark parts of me need to let her decide for herself and understand for herself but they’ll always be loud. They’ll always have something to say about whether or not I’m what she really wants, that I’m not a sham, a failure, a little beaten down thing.

It’s that moment I feel like every queer has had where you say “Am I not enough? Will I ever be what you want?” and you stand in that terminal, and you wait, and you hope to all the gods you ever imagined that she will be on the next train. 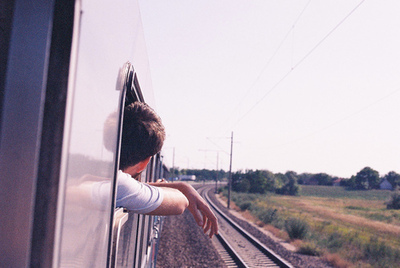