I’m not sure when my beat became “refreshing summer beverages,” but somewhere along the line, it appears that’s what happened. No point hiding your light under a bushel. Once a barista, always a barista. So now, along with suntea and cold-brewed iced coffee, you can bring brown sugar mint lemonade into your life! This is especially good if you’re having people over, perhaps for sitting on a porch/stoop situation and watching fireflies, and want something a little fancier than icewater to serve them. 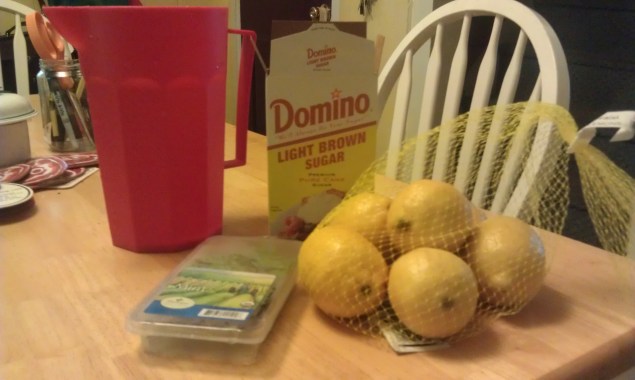 1. As you may remember from ill-fated attempts at a lemonade stand startup when you were eight, there are really only three ingredients in lemonade: water, sugar, and lemon juice. We’re going to make all three of those things (well, two, water doesn’t really need to be “made”) and then be ready to get hydrated. We’ll start with the sugar, which in this case is actually a simple syrup. Take the brown sugar and 1 cup water and put them in a pot on the stove. Bring to a boil, then let simmer until the individual granules of sugar have dissolved and you have a homogenous liquid that looks sort of like maple syrup.

2. This is where things get ~fancy~. Turn the heat off the simple syrup once the sugar is dissolved, and then throw in about 3/4 of your mint. You can use all the mint if you want, but then you won’t have little mint leaves to throw into your individual glasses. Maybe crush the mint up a little with your hands or something first to get it to really release the minty-ness. This will get minty flavor all throughout the simple syrup. You can leave the mint in there for as long as you want — I only left it for about a half hour because I was really anxious to drink some lemonade, but you could leave it overnight if you wanted. You could actually probably leave the mint leaves in the actual final lemonade, but I was too nervous to do that because I was afraid they would go bad and ruin my lemonade. Anyways! 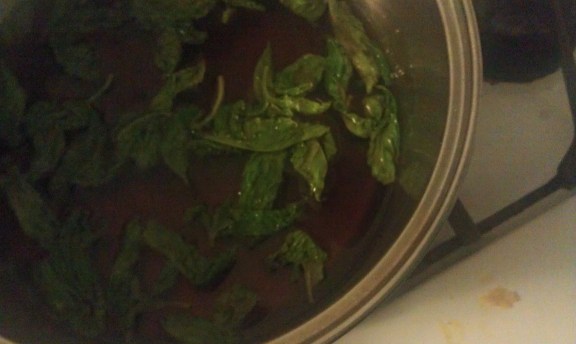 3. Okay, so your simple syrup is hot and steeping and getting minty. Let’s juice some lemons! I’ll be honest: it’s shitty to do this without a juicing apparatus. I use this one, but when I was growing up my mom had this one. I don’t really understand this one but have heard good things. If you don’t have a juicing apparatus, it’s ok to just go on ahead and buy a bottle of lemon juice. No one will judge you. Juice all your lemons by cutting them in half and using your juicing apparatus on them. You can either juice them over a strainer directly or juice all of them and then pour the final product through a strainer, but either way it’s easier than picking the seeds out with your hands. 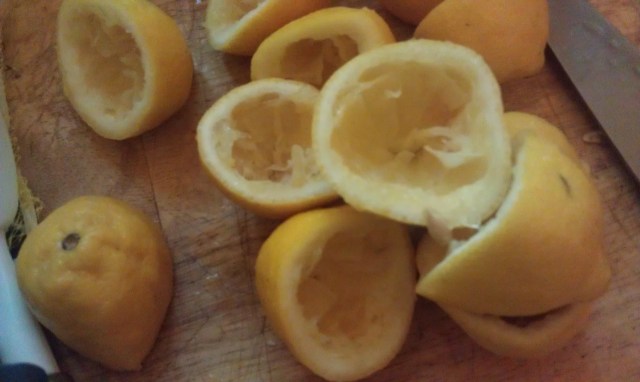 4. Okay, you’ve got your lemon juice and I’m going to assume that you’ve steeped your mint however long you want to in your syrup. Combine them! I also poured my syrup through a strainer because, as aforementioned, I am afraid of decomposing mint leaves, but do as you will. Now that your syrup and lemon juice are combined, you can pour them into whatever large container/pitcher you plan to keep your lemonade in. It’s time to start adding water! The recipe says four cups, but I would start with two and then taste your way through every 1/2 cup or cup. Nothing worse than bland lemonade. (Just kidding, almost everything is worse, but still. Do yourself a favor and taste as you go.)

There you go! You’re lemonaded! If you saved some of your mint, now is the time to throw some in a glass with ice and pour some lemonade over it. If you didn’t, that’s fine too. I can speak from personal experience that this lemonade is pretty good with alcohol in it also! Because of the brown sugar, I put dark rum in it and that worked pretty well. I suspect bourbon would also taste great in it. It’s your job to find out! 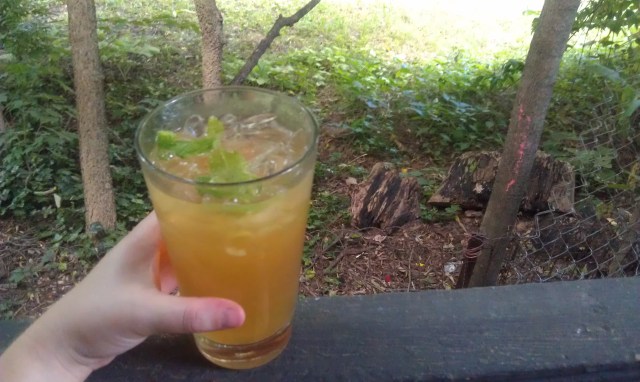 DON’T GET TOO JEALOUS OF MY BACKYARD NOW (“BACKYARD”)