The women behind Weddings Unveiled magazine have carved out a space (albeit a small one) for same-sex couples in their magazine, ringing in their next issue with the publication’s first-ever advertisement depicting more than one bride. But it wasn’t that easy. 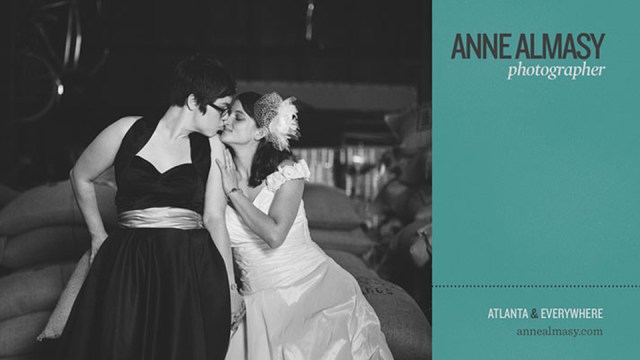 Anne Almasy is a wedding photographer based in Atlanta with a portfolio full of Georgian brides and grooms alike helping to bolster her local reputation. She made the decision recently to begin advertising, and selected Weddings Unveiled for her first excursion into mass media. By now she’s been photographing ceremonies for ten years, and she selected her image of choice – two brides kissing at their wedding ceremony – “because, to me, it says love. It says home. It says joy.” She submitted the advertisement for review on Valentine’s Day.

The response was a knee-jerk reaction: the magazine editor called and asked if she could select another image. “We just don’t feel comfortable publishing an ad featuring a same-sex couple,” they told her. ““I’m not saying we won’t ever publish a same-sex wedding,” they continued. “It just isn’t the right time.”

Almasy made the decision not to re-submit with a different image, and instead posted an open letter to Weddings Unveiled on her website:

Dear, dear Weddings Unveiled, my heart breaks because you could not find it within yourself to be that someone.

Weddings Unveiled has a national distribution network and is sold in flagship book stores across the country, but is specifically targeted toward southern states. Terri Ireland and Brooke Thomas, the co-founders of the publication, describe it as “reflective of the South’s modern sophisticate.” In its media kit, most spotlighted audience locations are “Bible Belt” states: Georgia, Tennessee, North and South Carolina. (The only city listed that is above the Mason-Dixon line is New York City, where every single magazine that has ever existed probably rents office space.) Same-sex marriage isn’t legal in most of the states Weddings Unveiled targets, and most of those states are within a geographical location where same-sex acceptance is at a national low.

Unsurprisingly, a quick glance at the magazine’s content reveals that they don’t exactly do much to appeal to lesbian or gay couples, purposefully or not: zero of the couples featured in the magazine’s “Real Weddings” section, for example, are those with same-sex partners.

But Weddings Unveiled is also a business, and a magazine that is in a publishing realm constantly searching for money. Brides are niche markets, and you only plan a wedding once (or twice, or three times…) – and for that reason, turning down advertisers seems like, well, a pretty dumb move for a bridal magazine. After all, we know that nationally, people are coming around to the queers in their neighborhood – and that same-sex marriages bring in lots of money. Weddings Unveiled might be centralized in southern states, but national distribution ensures that many of the brides reading it could, in fact, be from regions where same-sex unions are legal, and may even be planning their own (strictly vegan) formal partnership ceremonies. The magazine itself boasts attracting national advertisers because of the decisions of many couples to hold weddings in southern states, be it for scenery or their familial histories.

The bottom line is that turning down a paid advertisement unaffiliated with your publication because it non-politically depicts a happy same-sex couple, in light of all of these opposing facts, still seems dumb. And so, Anne Almasy won, and was issued a formal and public apology on the magazine’s blog. Within it, Terri and Brooke explained that they themselves support same-sex marriage, and that the decision was not based on their own personal judgements:

We are two women who operate a small business that we care deeply about. We love all weddings. We love all people and would never want to anger, offend or disappoint anyone. We are deeply moved by the outpouring of love and support for Anne. We are so sorry that we have disappointed you and we ask for your forgiveness. If Anne would still like to run her ad in Weddings Unveiled, then we would be proud to publish it.

Almasy accepted their offer, writing to them that she “couldn’t have imagined a better outcome.” She added, “I hope you have recognized the vast community of support you will have for championing what is right and true. I will gladly stand with you in this fight for equality and would be thrilled to move forward with this ad.” Her encouragement and excitement don’t seem, at the moment, to be at all misplaced. The feedback she has received online – ranging from messages of support to her own father’s tearful pride – is nothing if not an indication of times that are finally changing.