Even with four months to go before London flies their rainbow bunting, storm clouds are already predicted for the parade route. London LGBT + Community Pride, the official organizers that took the reins last October, released a statement after their meeting on Tuesday. Instead of an invigorating press release telling Londoners of the fabulous, glittery splendor that lies ahead of them for the 40th anniversary of the first national conference for LGBT equality. Chairman Michael Salter hinted that Pride may be a little bit boring this year. AKA there may not be a London Pride this year. 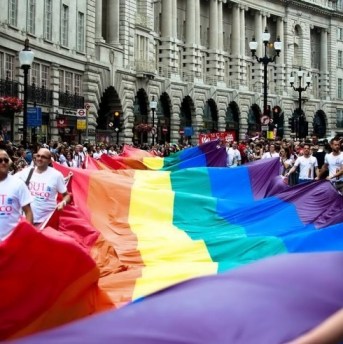 With such a short lead time this year we need the community and its supporters to really get behind Pride – to show the spirit that we saw last year when record numbers of people took part in the parade in reaction to the threat to Pride’s survival.

Although we are confident in our planning it is true that if we are unable to secure the funding and volunteers that we need to deliver a safe Pride – one that showcases the best of our community – we may have to cancel the event for 2013.

A statement on their website reveals how strained their organization is.

If it seems by the end of April that we are not on course to secure the necessary funding or volunteers then we will have to consider scaling back or cancelling the event.

The London LGBT + Community Pride doesn’t know if they can pull this party off and their worry is not without precedent. Plenty of Londoners still have the bitter taste of disappointment in their mouths after last year’s WorldPride fiasco. It was supposed to be an opportunity for LGBT Brits to share the international spotlight with the Olympics, Paralympics and Diamond Jubilee but instead, it devolved into a bloody disaster. Nine days before the parade, the event was re-categorized, rescheduled and re-billed as a float-less and vehicle-less march. Official events surrounding the parade were also nixed, reverting Pride Week to a so called “normal day.” Given that all of the other London-centric events received enough funding to wow the world, the queers felt like they were getting the short end of the disco stick. 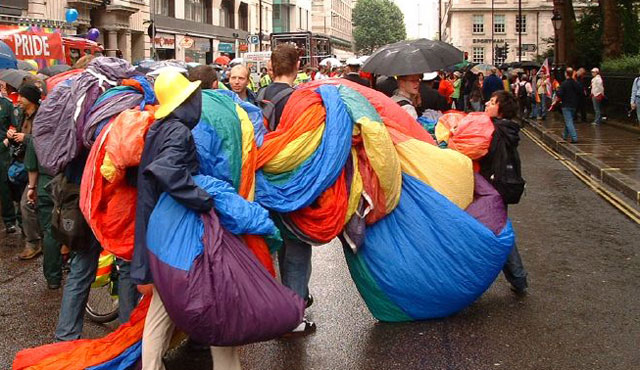 Just like last year, money (or lack thereof) is to blame. Given that the event will see 40,000 parade goers taking over London’s busiest district, the projected costs are high. Last year the Mayor’s Office sponsored £100,000 of their £300,000 budget and it still wasn’t enough. Smirnoff backed Pride London for the past two years, but they have yet to sign on for 2013. This year the GLA  is ponying up £150,000 for Pride, leaving the organizers £280,000 short. With a lot of those rainbow dollars ear-marked for security and safety, you have to worry how much “scaling back” they’ll have to do to the parade and events if fundraising targets aren’t met. Last year all of the SoHo WorldPride events fell on the chopping block.

When it became clear that Pride London couldn’t raise the funds, they said they were “returning to the roots of the original Pride London rallies” when they hacked away at the WorldPride roster. Even though it seemed like a giant fib, that blatant excuse could just be the motto London’s organizers need for 2013.

One of the big differences about us and our plans for Pride in London is that we’re also encouraging community groups and businesses to run events under the Pride banner in the week running up to Saturday 29 June. We will promote those events at the heart of the week-long Festival of Pride. 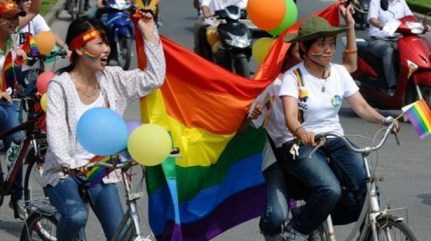 Pride in Vietnam via AFP

Call me crazy, but re-imagining pride as a community based festival seems obvious. What is Pride supposed to be other than an opportunity for queers to rise up and take back a city that’s rightfully theirs? If the parade is the only thing that’ll survive a funding cut, it isn’t too much to ask small businesses and community leaders to help fill out their event. San Francisco manages to host 23 community run stages and venues to give a richer view of their community. Last year Vietnam hosted their very first pride parade and no one complained that it was a self-organized affair. Given that the UK is in the midst of law reforms that’ll prove just what their neighbours think of them, queers may need to turn to one another for support in case the rest of the country won’t. 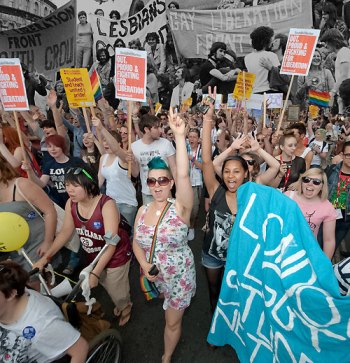 If Prides are ever to return to their grassroots, they’ll need support from citizens in addition to smaller organizations. London LGBT + Community Pride project they’ll need over 700 volunteers to run the show, so go out and volunteer if you happen to be in London this summer. They also need other minds to ensure that the events  can be as inclusive as possible. So send out an application to sit on the Community Advisory Board before Thursday evening if you can make that difference.

We want Pride in London to be for, of and by our community. And we need the community to work together with us because only together can we put on a pride that will make all Londoners proud, celebrate our achievements, campaign for change and continue to remind people of the importance of equality.

The Paralympics, Olympics and the Diamond Jubilee set the bar high in terms of events hosted in and by London. We might not leap over that bar in year one, but together we can build Pride in London in the coming years to become a beacon to the rest of the world. It’s no more than we, and London, deserve.