Artist: EVERYBODY
Cliffnotes: EVERYTHING
Same Aisle As: EVERYWHERE

Okay, full disclosure, I’ve been mad busy and dealing with some gnarly depression for the last few weeks so anything that hasn’t been my full-time job, related to my dog/girlfriend, or showering has taken a backseat.

I have, however, been listening to a LOT of music and come across a lot of great artists I’d like to share with you. So instead of focusing on one artist, I thought it best that I share some tracks from multiple artists that you might want to check out.

A trio from Brooklyn, they have a lot of lush and mellow harmonies. They kind of remind me of Bon Iver meets Frou Frou. They have a lot of synth sounds that serve as a nice support for the ethereal vocals. Also their website URL is http://kanyewet.biz/.

Definitely my favorite pick from this grab bag. Broods is yet another export from New Zealand that is making some pretty awesome tunes. This duo has a great sense of rhythm, catchy hooks, and instrumentation. Here are my favorites of this band:

The electronic-pop duo definitely seems to be the successful trend in the industry. ASTR has kind of a dance-hall sound a la SBTRKT with tones of old hip-hop mixtapes and a vocalist who sort of reminds me of Sia. They also have a pretty great Drake cover.

Anna of the North

An early find, Anna of the North (from Norway) is just starting to kick off finding her sound and releasing songs. I like all the different instrumentation that’s going on here and I think this artist will have some promising releases!

A slightly dubsteppy sound, but Chet Faker’s vocals brings a nice softness to the edgy snares and synth. If anything, just watch the music video for the fancy footwork!

Essentially what would be a great track to put on for a night in and smoking, this DJ has a very chill vibe and is pretty wonderful to space out to. Not super great, however, for my productivity.

YOU GUYS I KNOW IT’S JUST THREE DUDES* BUT HOLY CRAP I LOVE THEM SO MUCH. Whenever I’ve been feeling down lately, I just put on The Glitch Mob’s first album and I feel better almost without fail. I feel like I can take over the world and do whatever and the soundtrack to my life is epic. It’s so easy to lose yourself in this kind of sound and I just saw them live at Lolla and they were just fantastic. Interesting fact: when they perform live, they usually have an electronic drumset and a cool MIDI interface that they use to layer all the tracks instead of queuing up their tracks like most DJs do. The track “We Can Make the World Stop” has some great instrumentation that takes you by surprise and “Fortune Days” has an awesome drum track at 1:55.

*Changed thanks to Chelsea’s correction. I had previously written “THREE WHITE DUDES” but she pointed out that edIT is, indeed, an Asian dude.

And just for kicks…

This song. Because I love it. And it has gotten me through this month.

Just like this article, I’ve made a “grab-bag” drink from my fridge! So here we are. A nice summery spritzer to get you through the hot, sticky, humid jungle. Or is that just Chicago? Just Chicago? Okay. The drink itself doesn’t look anything fancy, so here is me drinking it with my fancy face. 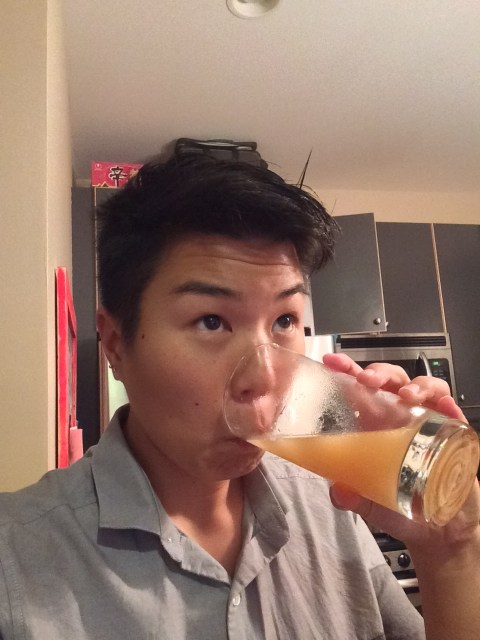 My latest thing has been adding grapefruit juice into champagne to make mimosas and I really like the bitter taste it carries with the sweetness of the champs. One of my summer beverages of choice to sip on is the Steigl Grapefruit Radler. Being fully aware that it’s not really beer and it just tastes like alcoholic Fresca, I STILL LOVE IT. So if you hate how it tastes with the rest of the ingredients, I’ll take console in knowing that I’ve at least made you try the Radler at least once.

Check the playlist below on Spotify for the tracks listed in this article and additional tracks!