Rejoice! Fall TV is finally almost here! This week our TV team even made you a guide about when and where to find all the queers coming your way this autumn! Also, Valerie recapped a holigay episode of Wynonna Earp and Heather counted down some of her favorite TV fever dreams! Now, we are here to tell you all about The Sinner and then it’s just Quick Hits for the rest. Hang tight, we’re almost out of this summer’s television wasteland!

Also, Riese is really truly going to publish a thing about Harlots next week, she promises. 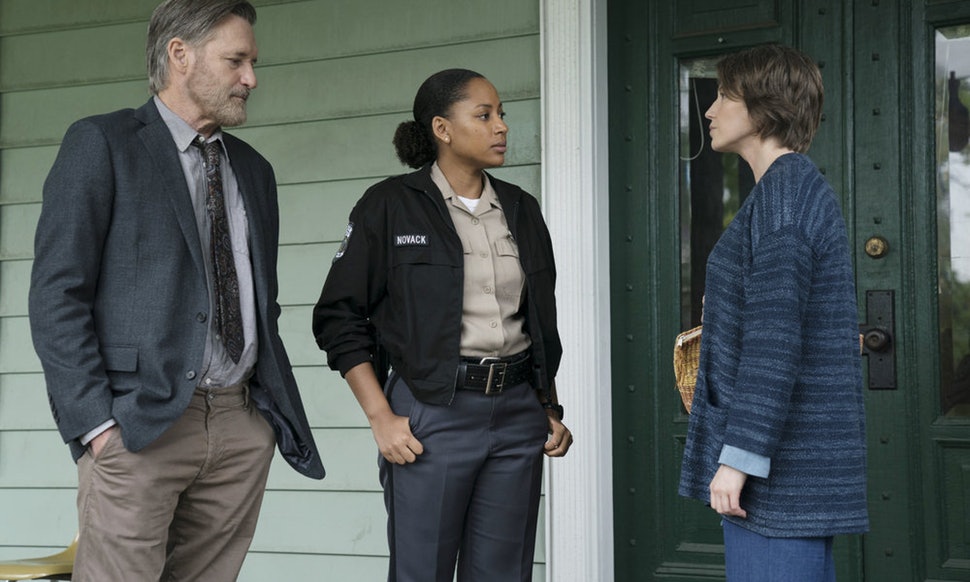 I watched the entire first season of The Sinner last month with my friends Kristin and Gretchen while addressing envelopes for A+ members. By the time I’d finished all the A+ packages we had maybe three episodes left, and I gave it my full face and heart, which became gradually more hazardous to my general well-being as the twisty cuckoo clock mystery wound its way into a traumatizing and genuinely shocking finale.

The Sinner is produced by Jessica Biel, who was one of two girls I crushed on before knowing I was gay (the other was Britney Spears which unfortunately means I have the same taste in women as Justin Timberlake) and it’s an anthology series, which means the second season is an entirely new, Jessica Biel-free story. The only carryover from Season One is Bill Pullman’s Detective Harry Ambrose, who talks into his beard primarily and to the room secondarily. If you were born in the ’80s like me then Bill Pullman is basically your Dad, but also the President of the United States, a generous supporter of the Newsies strike and the co-star of the classic Ellen DeGeneres rom-com Mr. Wrong.

Anyhow! The Sinner is best described as not a “who done it” but rather a “why done it” — in both seasons, it’s clear who committed the murder, what’s unclear is why on earth they’d do such a thing. The other mystery is why Harry Ambrose cares to much, but okay fine.

Season One had what some conservative websites referred to as “lesbian incest” (this was my punishment for googling “The Sinner Lesbian Incest”) but if you’ve seen it you know that’s not really exactly what happened! Therefore it’s safe to say that Season One did not contain any genuine lesbian content or characters.

Season Two, however, has a lesbian character right there in the forefront! Her name is Heather Novak, she’s a Black detective-in-training who is investigating the double-murder of a couple who’d escaped this Mosswood commune, which is basically a cult with a megalomaniac white man at its ideological roots of course. The murderer is Julian, a kid born on the commune who the murdered couple took with them on what was allegedly a trip to Niagra Falls but it’s unclear where they were really going or who if anybody (for example Julian?) believed they were actually going to Niagra Falls.

But why did Julian, this innocent little child, murder this couple? It’s a mystery! Novak calls Ambrose, an old friend of her fathers who grew up in Keller, New York, where the story takes place, to come help her navigate it. Before long they begin to butt heads as she suspects his unorthodox methods could be compromising his loyalties and ability to help with the investigation.

The case is particularly affecting for Heather because she lost her best friend/first love, Marin, to Mosswood’s psychological clutches. For ten years there’s been no word of Marin, and Heather seems herself emotionally tethered to Keller until she gets the closure she needs on Marin. The pain of her first love never loving her back the way she wanted her to is compounded, then, by how Heather ended up losing not just their potential, but also Marin’s entirely actuality. Maybe forever. I mean, chances are good Marin isn’t alive anymore. 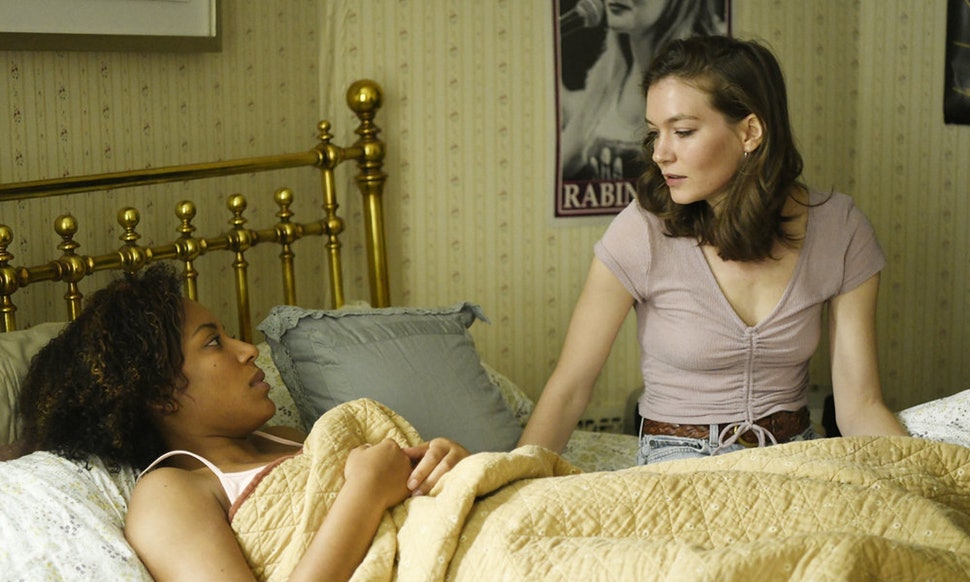 Heather keeps a lot inside, and how! She’s one of very few Black people in Keller — her father is white, her mother is dead — and she only came out to her Dad a few years prior to the series’ events. Years of editing herself and compromising her truths to construct a life that fits into Keller’s scripts are always right there beneath the surface. Her relationship to Marin ends up being an unexpected point of entry and even a central element to navigating the mystery of Mosswood, and as their high school relationship is gradually told through flashbacks, the present begins piecing itself together as well.

I won’t say too much more — I want you to watch it, and I don’t want to give it all way. But do watch it, if you, like me, are drawn to dark stories that genuinely keep you guessing. At times the narrative feels a bit derivative, especially if you’ve watched literally everything about cults that has ever been produced for television or if the last time you saw Carrie Coon in a show, it was The Leftovers. But that’s easy to overlook, ultimately, and there’s so many other things making it impossible to look away.

Delle Seyah’s baby rapid-grew into a pre-teen and now he’s learning about how he kind of has four parents? He was born from Delle Seyah’s body and his DNA is made up of D’avin and Aneela, but Dutch is technically a sort of clone of Aneela, so probably shares just as much DNA with him? It’s all very confusing for everyone involved, but it was still nice to hear little Jacobis (Jack for short) ask about Delle Seyah and his “other mother” while learning how to be a Killjoy from auntie/sister/mama Dutch. I sure hope Aneela gets to meet him soon. And that she’s reunited with Delle Seyah, who got the hells out dodge last ep. — Valerie Anne 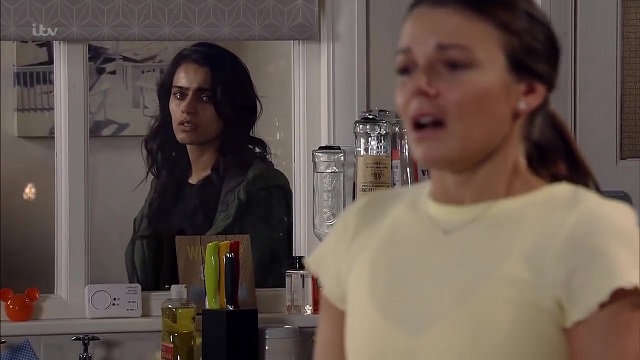 Since her father’s funeral, Rana’s been keeping up the rouse of her and Kate’s break-up, much to Kate’s chagrin and to her mother’s delight. Feeling the warmth of her mother’s love again and hoping that they might be able to permanently mend their relationship, Rana accepts the invitation to accompany her on a six-week cruise. Her mother’s so pleased, she urges Imran to split his inheritance with Rana after all. Surely, Hassan wouldn’t have cut her out of his will if he’d known she was back on the “right path.” That revelation is enough to break Rana’s resolve to keep her relationship a secret and the truth spills out; unsurprisingly, Rana’s mother leaves, disgusted.

Rana: Do you see how ridiculous you’re being?
Saira: My faith isn’t ridiculous.
Rana: It’s my faith too.
Saira: How can you say that? You’ve turned your back on your God, your family, your faith!
Rana: I haven’t, Mom. They turned their back on me and so have you.

I loved this conversation — it’s one that anyone who’s grappled with their faith and their sexuality can relate to — and it’s a beautiful piece of acting from Bhavna Limbachia, but it was diminished by the show’s awful pacing. Everything happens way too fast; in a heartbeat, Rana’s mother — who once tried to kidnap her daughter — goes from outright rejection to acceptance and it feels dishonest and unearned.

Kate finds the evolution as hard to believe as I do and, when she learns Rana still plans to leave with her mother for six weeks, Kate tells Rana in no uncertain terms that she won’t be waiting when Rana gets back. After some gentle cajoling from Daniel, Kate softens and when Saira comes to collect Rana’s passport, Kate promises that she’ll be waiting for Rana when they return from their cruise.

Thankfully, she gets the opportunity to deliver the message straight to Rana before she leaves Weatherfield. As Saira snidely looks on, Kate apologizes and urges Rana to make amends with her mother. They exchange I Love You‘s and hugs before Rana departs. — Natalie 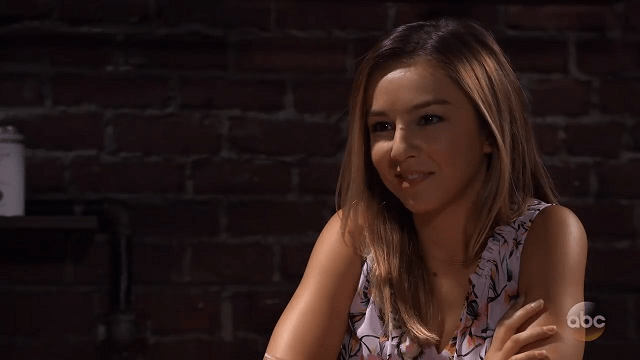 After delaying her return to Oregon, Kristina ultimately decided to head back to Oregon this week to collect her belongings and end her relationship with Parker. They’re still in love, but Kristina admits that love might not be enough. She muses about how much she had to give up to follow Parker to Oregon which… I mean… when she left Port Charles last time, she had no real friends, aside from her sisters and her retconned friendship with Valerie, she’d dropped out of grad school and was working as a barista at her dad’s coffee shop. She didn’t really give up much.

If these are the hoops that GH is making fans jump through just to justify Kristina being back on the canvas, my hopes for this storyline just got even lower. — Natalie

The Young & the Restless 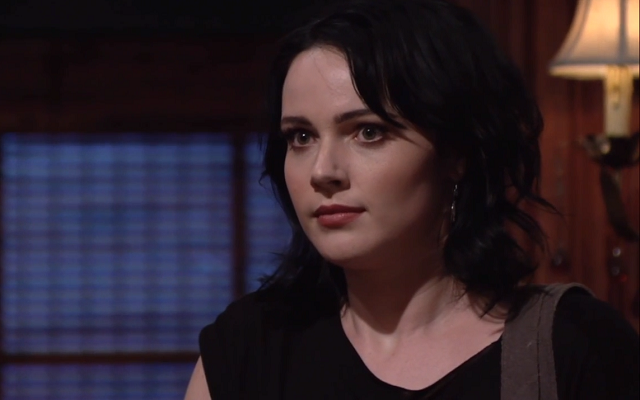 Tessa’s back. After getting her fugitive sister settled elsewhere, she returned to Genoa City to resume her life and rekindle her relationship with Mariah. Seconds after Tessa’s walked in the door, Mariah fears are all erased — she’s spent the last week worried and even went so far as to hire a private investigator — and she asks her mother to pledge her support to their relationship. But Mariah’s fears return when Tessa reveals that she needs to raise $20k to pay the people that helped get her sister settled. — Natalie 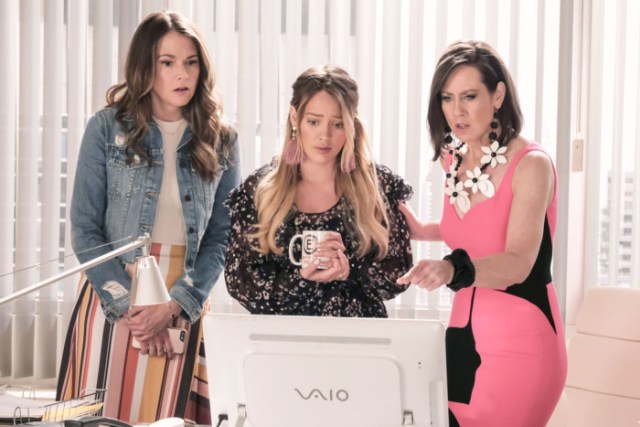 Younger finally did what I’ve always wanted it to do, but never believed it’d get close to it — it put Hilary Duff in charge of everything and kicked Charles to the curb! It makes sense: Millennial is keeping the entire company afloat, and has been for a while, and that’s all thanks to her and Liza. Charles steps aside because — surprise! — news breaks that he’s dating an assistant in her 20s and it’s rightfully a scandal. On the queer front, Lauren tells Josh the best way to figure out if he wants to donate sperm to partake in a cacao ceremony. He does and decides he wants to father Liza’s baby. Apparently he read his vision wrong, though, because he’s already got a baby on the way and it’s in Clare’s uterus. This was hands down my favorite season of this silly summer show; maybe the love triangle can be the B-plot next season and the main story can be about these powerful publishing broads! — Heather