TV dream sequences are always tricky, and especially so when it comes to lesbian and bisexual characters, because more often that not dreams are used as a way to stage a little bit of fan service that can simply be hand-waved away when the sleeping character wakes up. Networks sometimes even use those dream sequences as queer-bait to lure is into their heterosexual traps! The best TV dream sequences reveal something about a character’s subconscious that we didn’t know, or that we suspected but hadn’t seen confirmed; they divulge a character’s deep secrets to the audience, or to the character herself, and then allow her a chance to act on the truths her sleeping mind pummeled her with. Also, usually the sex is really good.

Below are 12 of the best lesbian and bisexual TV dream sequences. 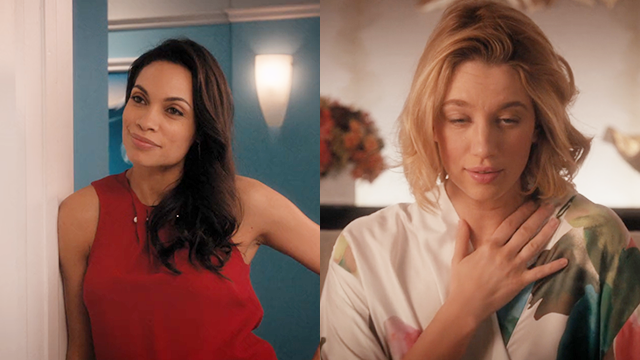 Petra knew something was going on with her and Jane Ramos, but she couldn’t quite admit to herself exactly what that something was — until she dreamed JR at her door, leaning against the frame, talking about getting her off and also getting her off. Petra is shocked and delighted when she wakes up from making out with JR, and immediately finds a way to act on her latent lady-loving leanings. 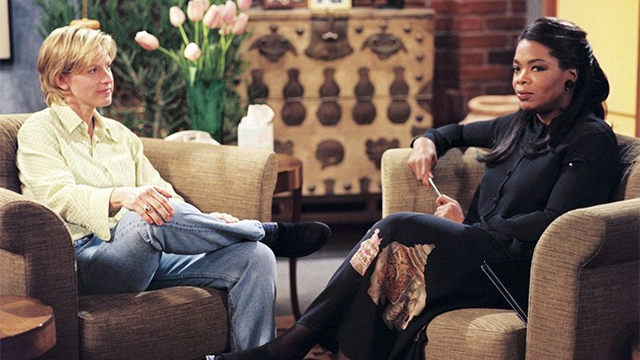 The second part of the most famous coming out episode in TV history opens with a dream of Ellen in the supermarket. Laura Dern’s walking by holding cantaloupes to her chest talking about “melons are on sale!” and k.d. lang is there winking and there’s a clerk with an alternative lifestyle haircut and a bowtie offering Ellen granola samples and the woman on the PA announces there’s a lesbian on aisle five. Ellen recounts the dream to her therapist, Oprah, and asks if she thinks she should read anything into it. It’s the first time Ellen says out loud what’s going on inside her head and heart (later, of course, she accidentally yells it into a microphone at the airport). 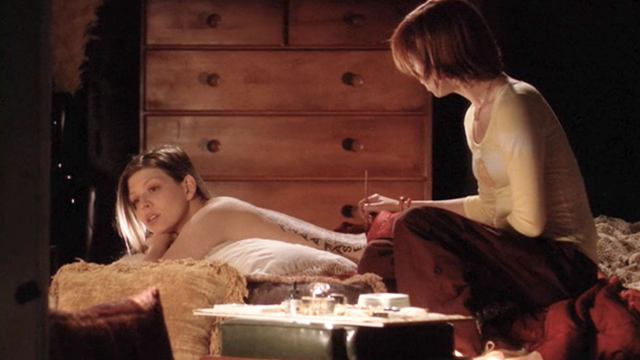 “Restless” is a fan-favorite episode of Buffy, especially among queer fans. Willow’s specific dream opens with her painting one of Sappho’s poems on Tara’s naked back while she muses that it’s okay they haven’t found a name for their cat yet; she’s not fully grown. The rest of the dream forces Willow to confront her fears about coming out and her worries that she hasn’t changed at all since high school and that Oz and Tara would be better off without her, even possibly better with each other. It’s heartbreaking and illuminating and oh so real.

Bette and Shane and Tina and Helena — The L Word episode 502: “Look Out, Here They Come” 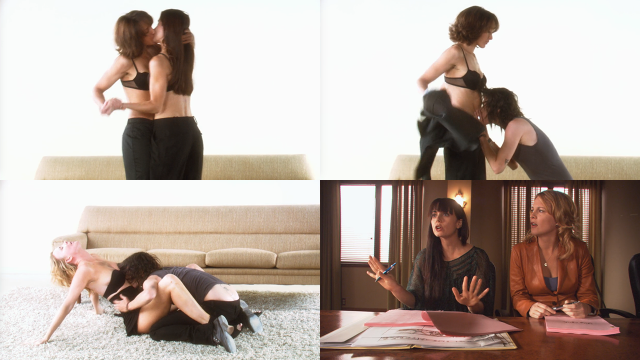 You could argue that the entirety of The L Word season five is someone‘s fever dream. (Maybe mine?) There’s a lot of metacommentary and winking and nodding at the audience. One of the best and weirdest and funniest fan service moments of the whole show happens when the Lez Girls producer starts dreaming up couple combos and pitching them to Tina and Jenny. How about Bette and Shane? How about Bette and Helena? How about Tina and Shane? That one sends Jenny over the edge. It’s not a sleeping dream, but it’s definitely a collective fandom dream, and that’s good enough for me.

Mona and Alison — Pretty Little Liars episode 513: “How the ‘A’ Stole Christmas” 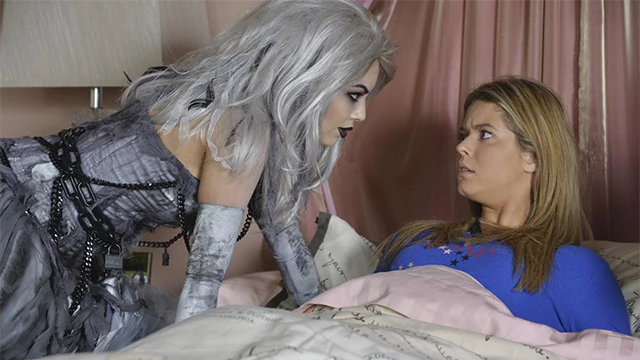 With a defter showrunning hand and less chasing after Twitter trends, Pretty Little Liars could have been one of the most consistently satisfying dreamscape shows on TV. Its very best episodes were fully Lynchian, which makes sense: Alison DiLaurentis is very much Laura Palmer’s offspring. One of the show’s most fun dream sequences happened after Mona’s death and before her resurrection, when she returned to Rosewood to haunt Alison as an omniscient Christmas ghost. There was always something antagonistically queer about their relationship, and Ali always seemed both threatened and delighted by the way Mona was the only person who could outsmart her. Mona guides Ali through her past and through her future, teaching her and chiding her and looking like the most beautiful unhinged snow witch the whole entire time.

Marceline and Princess Bubblegum — Adventure Time episode 711, “Take Her Back” 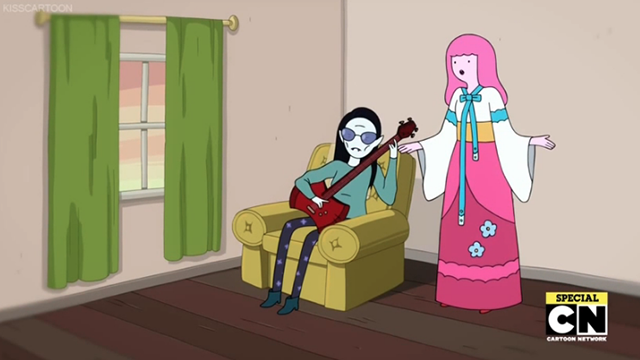 Near the end of Stakes, Marceline’s very own mini-series, she almost dies, and in those moments while Princess Bubblegum is holding her and begging her to wake up, she dreams something as honest as the first song she sang on the show: She and Bonnibell have grown up and old and they’re together. Together-together. That last thing Marcy says in the mini-series is that she wants what she saw in the dream. To be with PB, forever. 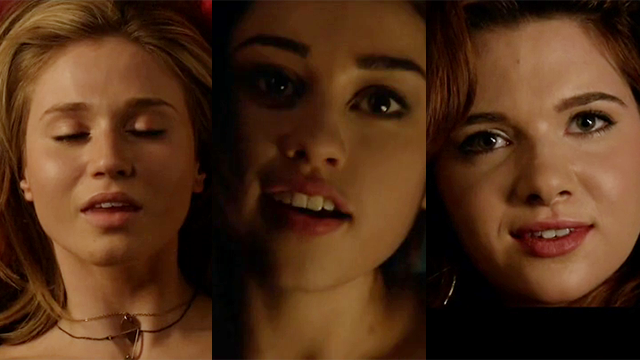 This is the most queer-baity dream sequence I can ever remember and it made queer fandom want to set this show on fire. But! I am a forever Karmy shipper and I can’t help it. I love this dream! In the season two midseason finale Amy goes camping with Reagan and it seems like she has finally gotten over Karma and is ready to be with someone who wants to really be with her and also who knows she’s gay. Reagan crawls on top of her and they start having sex and when Amy opens her eyes it’s Karma on top of her. They do their “whoa” “I know” thing and then Amy blinks and she’s in bed with Liam but really it’s Karma in bed with Liam and maybe she was the one dreaming the thing? Or maybe she and Amy were dreaming the same gay dream?! No one ever really knew what the heck was going on here, even the world’s most famous Faking It recapper, Riese Bernard. 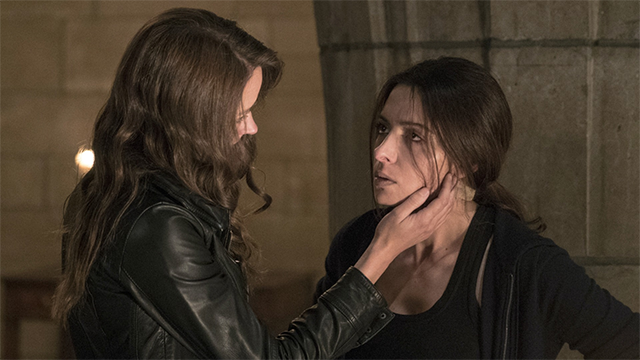 “6,741” is generally regarded by mainstream critics as one of the best dream sequence episodes of TV ever, and it’s generally regarded by lesbian critics as one of the best queer episodes of TV ever. It’s very, very good. After leaning into the subtext over the years, “6,741” finally went there with Root and Shaw. They slept together and caressed each other’s faces and Root even called Shaw “baby”(!!!!!!). At the end of the episode it turns out Shaw is dreaming the whole thing, in captivity, and has in fact dreamed nearly this same thing — Root saving her, Root loving her, Root fighting with and for her — over six thousand times! It’s heartbreaking and harrowing and so romantic it makes me want to hurl myself off a cliff into the ocean!

Sestras — Orphan Black episode 301: “The Weight of This Combination” 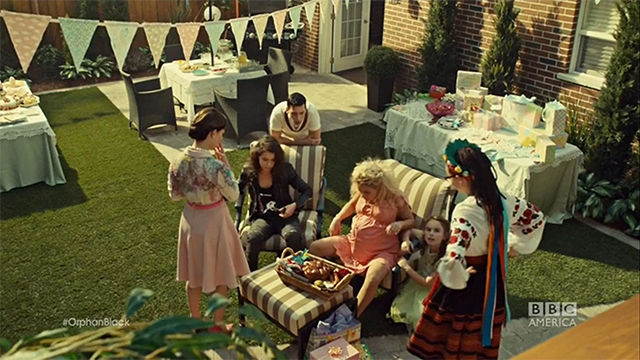 Orphan Black‘s third season opens with Helena trapped in a box with a talking scorpion, but we don’t know that at first because we’re seeing inside her mind where her sestras are throwing her a surprisingly sweet baby shower: Felix is grilling ox liver and Cosima is maybe Frida Kahlo and Alison has cooked a million cupcakes and the sun is shining and everyone loves her and her babies are going to be okay. There’s nothing explicitly queer about this, besides the fact that Cosima’s in it, but I’m counting it because it’s an exemplary dream sequence that opens up a character to the audience in a new way and I’ll never get over that all these women are Tatiana Maslany. Never!

Jenny and Madame Vastra and River Song — Doctor Who episode 713: “The Name of the Doctor” 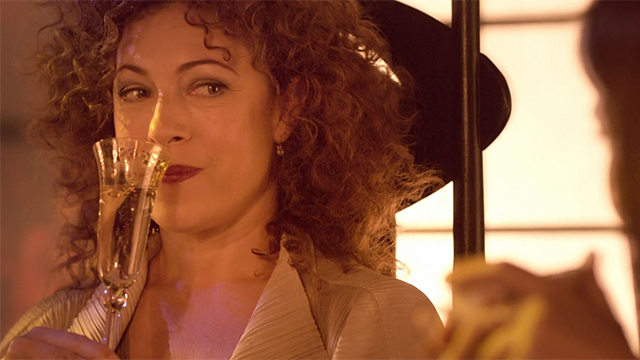 You put River Song, Madame Vastra, and Jenny in a room together and it’s going to make every list I ever make. Best people sitting at a table. Best people drinking champagne. Best people getting attacked by monsters. Best people being people. (And one lizard women from the dawn of time.) In “The Name of the Doctor,” the three of them plus Strax plus Clara enter the dreamscape to discuss some troubling news about the Doctor’s ultimate demise, and while they’re in there Jenny gets attacked and killed. Vastra flips out and might as well have punched through my chest and pulled my heart out of my body for how badly her pain hurt me! Through the sheer force of Vastra’s will and rage, Jenny is resurrected! And, of course, my beloved bisexual semi-Time Lord, River Song, saves the whole entire day (as usual). 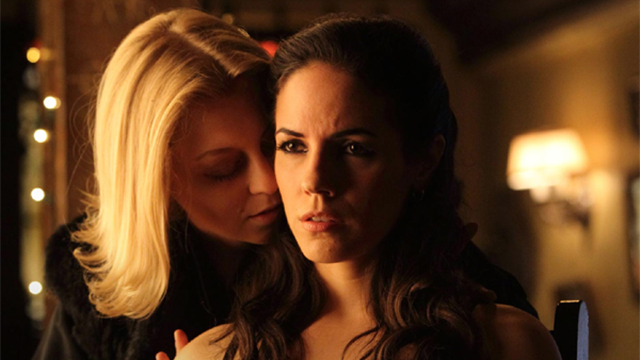 We knew a little bit about Bo after season one of Lost Girl, but we didn’t really know her. “Scream a Little Dream” takes us inside her mind and shows us her deepest, darkest fears. That she’ll outlive everyone she loves. That they’re better off without her. That she’ll never really be part of a found family. That they’re only tolerating her. That she’ll never experience real, lasting love. It’s like a series of Dementor attacks that just won’t quit. (Actually, that’s almost exactly what it is: a Dark Fae is feeding off of her nightmares to stay alive.) She finally beats it back with the help of a Light Fae, but not before revealing how very human she is to herself and to the audience.

Kat and Leila — The Bold Type episode 205: “Stride of Pride” 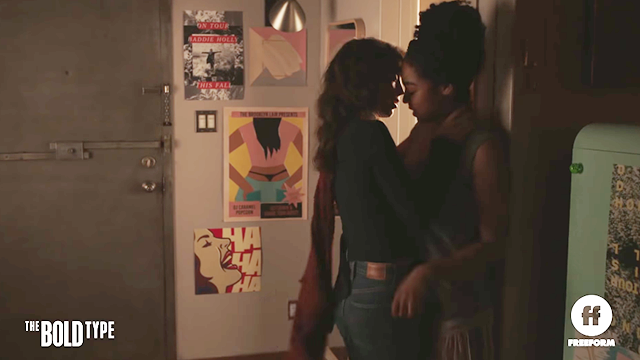 I’m going to call this “best” because: 1) It completely faked me out! I thought Kat was cheating with Adena’s friend! And 2) There’s this thing that broadcast network TV shows have often done with bisexual characters which is give them one woman love interest, and when that woman leaves, their bisexuality is never mentioned or explored ever again. The number of times Riese and I rolled our eyeballs out of our head being forced to put Angela from Bones on a list of queer characters is in the hundreds. Kat being interested in other women (and men, as she showed in season one) is good progress! This dream was ultimately the catalyst that led to Adena and Kat exploring the things that ended their relationship, and that’s a sad business, but drama is inevitable on television and at some point every youth has to deal with the fact that dream sex isn’t cheating.

What are some of your favorite lesbian and bisexual TV fever dreams?