How’s that post-Halloween drop working out? Or maybe you still have more partying to power through this weekend? Either way, we’re here for you and ready to catch up on some TV. First and foremost! Please say you’ve seen our mega-list of ALL 111 SEX SCENES FROM THE L WORD, RANKED! It’s the Autostraddle TV Team at our finest — rewinding our Netflix queues so that you don’t have to!

Speaking of lesbian sex, the lesbians of Batwoman kissed in bed with their shirts off in actual daylight and Heather almost had a heartattack. Sally watched MTV’s newest queer reality masterpiece True Love and True Lies and thoroughly enjoyed quietly judging other people’s love life. Alex can’t seem to stop worrying about the love of her life, Kelly, on Supergirl and Valerie Anne captured her angst perfectly. Carmen binged Rhythm + Flow on Netflix and couldn’t stop screaming about lesbian rapper Londynn B, so she made you a video playlist. Natalie wrote about this emotional last journey for Annalise and Tegan on How to Get Away with Murder, and of course it’s gorgeous and thoughtful.

Nobody celebrates Halloween like queer television! So Kayla took yet another trip to the topsy turvy world of Riverdale as our favorite seniors enjoyed the last spooky holiday of their high school careers. THEN! Did you read this personal essay from Valerie Anne about Haunting of Hill House’s Theo Crain? It’s the One Thing to put on your agenda this weekend. You will absolutely love it and maybe cry a little. But that’s fine by us and we won’t tell a soul!

+ It’s been an exhausting news week and if you need some good TV comfort food as a distraction, might I suggest the lesbian storyline on the Australian soap, Home and Away? I know it’s not everyone’s cup of tea but, for me, Willow and Alex’s new found love has been a joy to watch. — Natalie

+ If you’re still watching Bluff City Law, you’re a stronger person than I am because, despite knowing that gay was coming, I couldn’t bear watching more than one episode. That said, this week the show featured Della Bedford being honored as the person of the year by the “LGBTQ National Alliance.” Maybe it’s time for me to catch up? — Natalie

+ Mel kissed that crystal shop owner who had a crush on her (Kat) on Charmed, but then it turned out to all be in Mel’s mind and Kat thought she was covered in worms. It was kinda gross? Charmed has been a real struggle for me to watch this year. — Carmen

+ Kristen Stewart is hosting SNL this weekend! You may already know this fact, but just in case you weren’t aware. Here she is from Jimmy Fallon last night talking about her girlfriend and making a very gay joke about killing heterosexist gender norms for Halloween. — Carmen

+ Grey’s Anatomy featured lesbian parents of a patient (they were cute, but brief) and Resident Hellmouth in peak snark with a orange t-shirt that read “This is My Halloween Costume” while giving sage gay advice to Resident Glasses. If that sentence made any sense to you, you’re fully committed to the Grey’s lifestyle and I applaud you from inside our clubhouse.

How to Get Away With Murder 606: “Family Sucks” 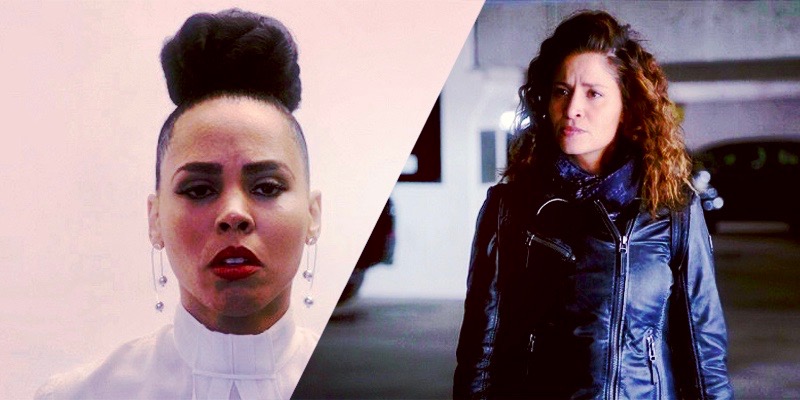 Last week, after leaving her ex-wife devastated by the admission that she’d stopped loving her long ago, Cora Duncan made her way to the C&G parking deck only to discover that her bike won’t start. Lucky for her, Nate Lahey slinks out of the shadows with an offer to help. Apparently, the pair hit it off so this week, we catch up with them working out together at the gym. Nate tries to seduce information about Tegan from Cora but because he operates with all the subtlety of a bull in a china shop, Cora sees right through his ploy. She records him admitting that he’s after information on Tegan and promptly sends the recording to her ex. Back at C&G, Tegan uses the recording to out Bonnie as Nate’s mole and promptly fires her.

Later, Tegan shows up at Nate’s to disabuse him of all his conspiracy theories about her. She promises, on the graves of her “siblings, parents, and grandparents,” that she had nothing to do with Nate Sr.’s death. She knows how grief can mess with your head and urges him to accept that she wasn’t involved in his father’s death. But, stubborn as always, Nate accuses her of lying on behalf of the Castillos.

Seeing that he’s beyond convincing, Tegan warns, “Come at me again, you’ll be seeing your father sooner than you think.”

The next day, Tegan meets up with Cora in the C&G parking deck and their conversation, though steeped in the pulp fiction of the HTGAWM-verse, felt as real as any relationship (particularly one, immediately post-breakup) the show has ever featured. Tegan’s still raw over the break-up and her emotions rise quickly to the surface, moving from “telling me you never loved me wasn’t cruel enough” to asking Cora if she’d planned to sleep with Nate. Meanwhile, Cora isn’t nearly as impenetrable as she was last week: Her flirtation with Nate was just a rouse to protect Tegan and, when her ex mentions Annalise, Cora seems a little jealous. Before Tegan retreats back to C&G she tells Cora to stay out of her life but given all that’s festering between them, it’s hard to imagine that happening.

After some encouragement from Annalise, Tegan re-approaches Nate with a peace offering: A wrongful death lawsuit as a means to expose his father’s killers and get some measure of justice.

+ Annalise spends the episode trying to shift the FBI’s focus back to the Castillos and preparing her contingency plan in case that doesn’t work. I wonder, though: If the Castillos know about Annalise’s relocation via “VIP Results,” why would Annalise trust that the Castillos hadn’t intercepted all the information about her new identity?

+ The civil suit was an idea that Michaela pitched to Tegan last season so I hope the idea’s resurrection means that we’ll get to see more of them together this season. Perhaps reinvigorating Michaela’s thirst for Tegan will stop her from making so many bad choices in men. 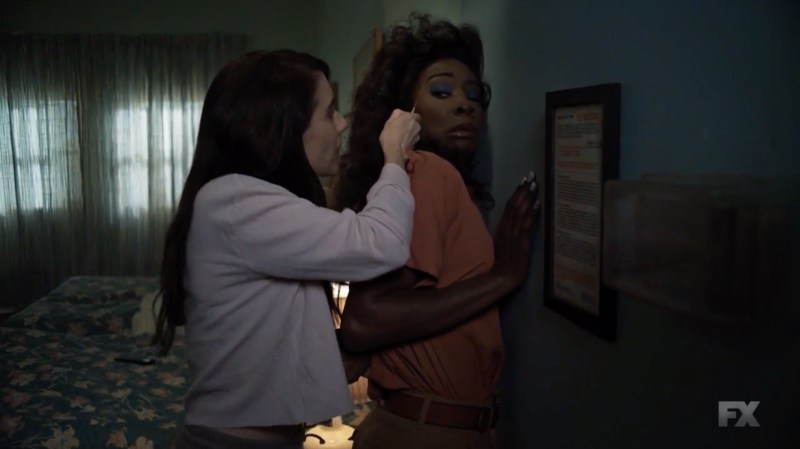 This week’s episode of AHS: 1984 was unfortunately all about Jingles. John Carroll Lynch is giving a really tender performance, but his storyline feels discordant with the rest of the show.

We learn that Jingles’ mother was in charge of Redwood in the 40s. She was cruel to him, favoring his brother, and when his brother died, she went on a rampage.

Now her ghost is terrorizing our ghosts, because she holds a grudge against all camp counselors. The counselors have a plan to kill everyone at Margaret’s festival in hopes that it attracts the world’s best ghost hunters to free them from purgatory.

But Montana says being a ghost isn’t so bad: “There’s a constant feeling of emptiness and longing, but that’s pretty much how I felt when I was alive.”

Also back from the dead is Brooke, who fights against Donna’s attempts to nurse her to health. Brooke pins Donna against a wall using her IV as a weapon, before Donna talks her down.

Trying to make up for Brooke’s lost 80s, Donna takes her to the Moonlight Rollerway where they dance around all cute and happy. They wisely refuse a hitchhiker, named Bruce, but when he fixes their car Donna says, “Once a guy’s gone under my hood, he’s not a stranger anymore.” Bad policy, Donna!

He’s yet another serial killer, and he forces Brooke to decide: get shot or drive away dragging Donna to death. Brooke snaps the car in reverse, driving cleanly over Donna, shocking Bruce, and giving her the chance to shoot him.

Chop chop go his hitchhiking thumbs and they’re back on the road to Redwood.

The season continues to be at its best when it’s campy and fun like this. So why does it keep trying to take itself seriously? 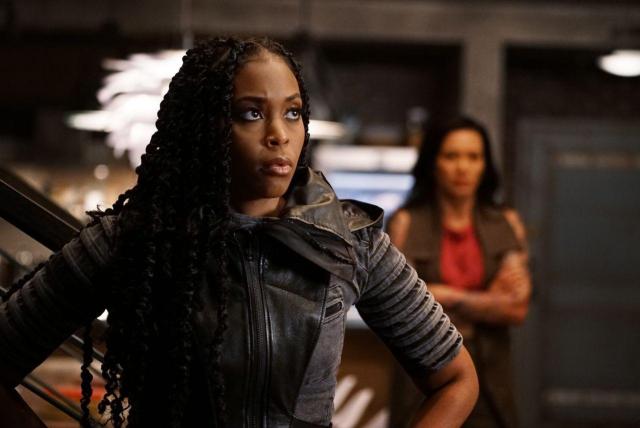 This righteous black queer anger is also how I feel towards the Black Lightning writers, if we’re keeping track.

Y’all I don’t even know where to begin with this show. All I’ve wanted, for three entire seasons, was to watch the scene where Grace would learn about Anissa’s powers. I’ve wanted it since literally the third episode of Season One, when Anissa checked out Grace’s ass in the bookstore and Grace was reading a copy of The Outsiders comic. THE THIRD EPISODE OF SEASON ONE!!! That is how long this show has been teasing that Grace Choi loved superheroes and was unknowingly dating one of the greatest, gayest superheroes of them all. Of course the moment she discovered Anissa’s powers were going to be mind-blowing! Of course!

After three years of torturous uneven and double standards storytelling, the writers of Black Lightning made yet another disappointing narrative decision that I suppose, given their past treatment of the couple, should’ve been expected: This week we found out that Grace learned of Anissa’s powers off screen. Welp! Talk about going out with a whimper instead of a bang.

Jefferson, newly freed from ASA captivity, visits Anissa’s new apartment and is surprised to see Grace at the door. He’s apparently never met her before, or even knew she existed (another plot hole to complain about for another day). His surprise turns to anger when he quickly puts together that Anissa’s paying for her new state-of-art digs with money Black Bird’s stolen from drug dealers — which, maybe, is fair. Then Anissa comes down the stairs in her Black Bird armor and Jefferson really loses it because now it’s clear that Grace already knows Anissa’s superpowered secret.

Anissa squares off against her dad and they get into a heated yelling match, which brings up a lot of PTSD for Grace. She shape-shits into a younger version of herself, pleading with Jefferson not to hurt them. Of course both Jefferson and Anissa are taken aback. Jefferson can be too controlling of his eldest daughter, but he’d never bring them physical harm.

Later, Anissa joins Grace in their bedroom. She’s still crying and a teen version of herself that she hates Anissa to have witnessed. Anissa gathers Grace into her arms and comforts her. She knows about the sex trafficking, the abuse; she knows Grace’s darkest secrets and she loves her. In her own perfect way, Anissa even finds a way to break the tension in their heavy moment, telling Grace she’s down for “Me, you, the leopard, that old guy. All of us, it’s one big party up in here.”

Grace laughs through her tears and damn, I wish I could tell you it was worth it.