Let’s go ahead and get the worst of it done out front: Grace Choi did not show up in last night’s Black Lightning season finale. I think most of us saw that coming, so it’s not necessarily a surprise. That doesn’t make it any less disappointing or any less of a gut punch reminder that even after two seasons, Black Lightning continues to double standard it’s sole gay romance as compared to their two long-term straight romantic relationships (did you hear me say TWO straight romantic relationships? Yes that’s right, we found out last night that somehow KAHLIL LIVED, which means his time with Jennifer is far from over).

I’ve tried very hard to give this show every benefit of a doubt that I could muster. When she premiered last year, Anissa Pierce was groundbreaking. Her accolades were many: First lesbian superhero on network television (only the second after Karolina Dean on Hulu’s Marvel’s Runaways, which premiered just a few months before), the first black lesbian superhero EVER, one of the few black queer women regulars in a television cast, one of the fewer still in a predominately black cast – as opposed to playing the “black lesbian best friend” in an otherwise white ensemble. She’s played by Nafessa Williams, who came out of the gate proud of and incredibly welcoming and loving towards her gay fans. Before the show premiered, Nafessa tweeted out “Ready for a Black Lesbian Superhero?” And I was.

I had been ready for her since I first fell in love with X-Men’s Storm when I was eight years old. There was absolutely nothing that could get in the way of me loving Anissa Pierce.

In the first season, Anissa started off strong. By only the second episode she had already made history, becoming just the second black woman in all of network television to share a bed with another black woman. By the fourth episode, she had already found herself in a relationship with Grace Choi, her longtime girlfriend from The Outsiders comics. It felt like the world was ours. But by the end of that season, Grace hadn’t been seen in months. Showrunner Salim Akil promised – he promised! – that Grace would be back in a big way during Season Two. I was nervous. Still, I chose to believe him.

I guess we can say that Grace came back for a larger amount of episodes during the second season, but her character development, and her relationship with Anissa, has continued to be frustratingly and stubbornly stilted. The little movement between them that we did see (Grace and Anissa making up after Grace’s well-founded worries over Anissa’s commitment problems; Grace giving Anissa keys to her apartment; Grace learning Anissa’s favorite fast food order; most of what we learned of Grace’s previous life as Shay Li) happened off screen. Compare that to the episodes long, on camera, carefully plotted teen relationship between Khalil and Jennifer this season. Compare it to the well-worn and comfortable adult relationship with a lovingly detailed backstory that we have between Jefferson and Lynn. It’s not hard to see which Pierce is getting the short end of the stick here. And in a show that is as otherwise meticulous as Black Lightning, it’s even harder not to ask “why?”

Last week’s penultimate Black Lightning left Anissa on a quest to find Grace – after realizing that her girlfriend was also a meta with shapeshifting powers that she had been keeping to herself out of fear – and finally ready to tell her the truth. She said that she wanted to be there to support Grace, to protect her, to tell her that she wasn’t alone in this world. This week? Not only was the presumed reunion skipped over entirely, Grace Choi wasn’t even worth a mention! Her plot just got completely dropped! WITHOUT A SINGLE WORD!!!

It’s outraging and maddening and, quite frankly, the product of some very homophobic storytelling decisions. I’m not sure what the Black Lightning writers’ room thinks that they are doing here. I’m generous enough to hope that these decisions are more the result of unconscious bias and ignorance instead of purposeful sidelining, but something needs to be changed. ASAP. The writers should use their hiatus before Season Three to gather themselves together, because what’s happening right now is flat-out disrespectful to their queer audience. It’s not hard to write Anissa and Grace with the same on-screen care that they’ve already given Jennifer and Khalil or Jefferson and Lynn. They only have to try.

OK. Deep breath. After getting that off my chest, let’s sort through what else happened this episode and see if we can find something to feel excited about, shall we?

Tobias Whale didn’t in fact die last night, despite my every wish that he would. Lala tried to kill him, but Tobias thwarted his plans at the last minute (side note: IF LALA WASN’T GOING TO KILL TOBIAS, THEN WHAT THE HELL WAS THE POINT OF HIS SECOND RESURRECTION?? Rest in Peace Lady Eve, at this point I’m actually thankful you’ve stayed dead, this show doesn’t deserve you). After Tobias tried to choke Cutter in a really disturbing moment of domestic violence, I thought maybe she would be the one to do the final deed. She came back down gasping for air and with one of her signature knives in her hands, but decided to leave him once and for all instead.

Then came my beloved Jennifer Pierce, debuting her superhero name “Lightning” as she tumbled through Tobias’ living room window in a ball of flames. As much as I believe Tobias deserves to die a villain’s death, I agree with Jefferson that Jennifer doesn’t deserve to become killer over his worthless ass. So ultimately I’m glad that Daddy Dearest stopped her at the final minute (I’m even more glad that Jefferson was given a timely reminder from his own father that “peace ain’t always peaceful” via a Season One flashback). Still, anyone who believes that Tobias Whale can be kept safe in prison, even one described as a The Pit by a secret spy agency where he’ll be locked away without a key, has never seen a superhero story before. There’s always a way out. It’s only a matter of time before Tobias Whale finds it.

Speaking of Jennifer, she’s pretty much the source of joy for this entire episode. We get to visit the hair salon in her mind’s eye one last time. Maxine Shaw: Therapist at Law (glad to see you, sis!) reminds her that she can control her powers as long as she taps into the right muscles. Jennifer also gets this GORGEOUS NEW SUPER HERO SUIT which I’m going to just leave here in photographic evidence, because sometimes a picture really is worth a thousand words: 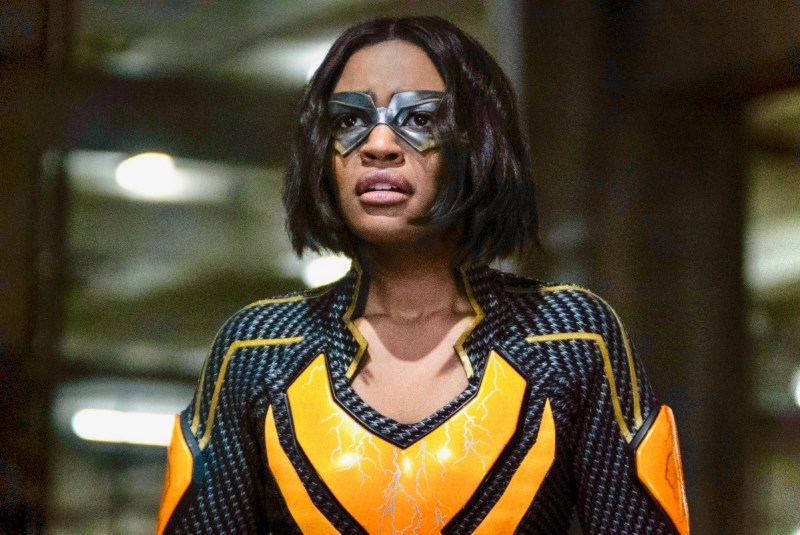 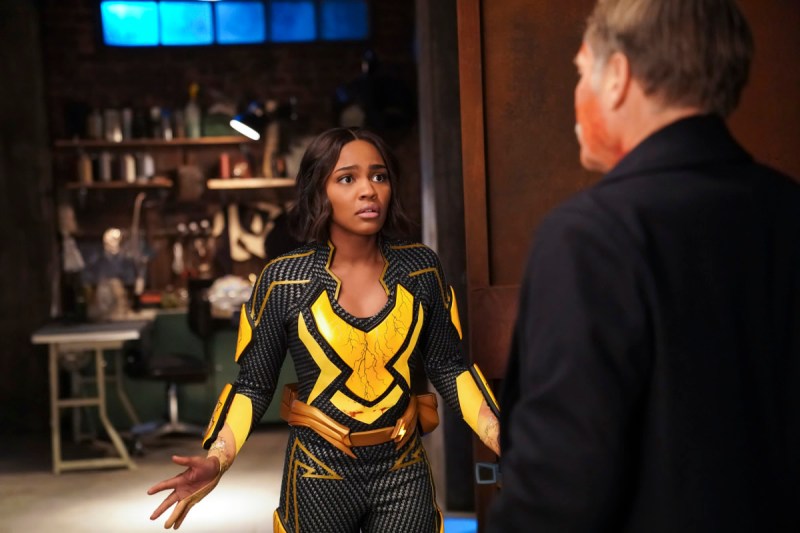 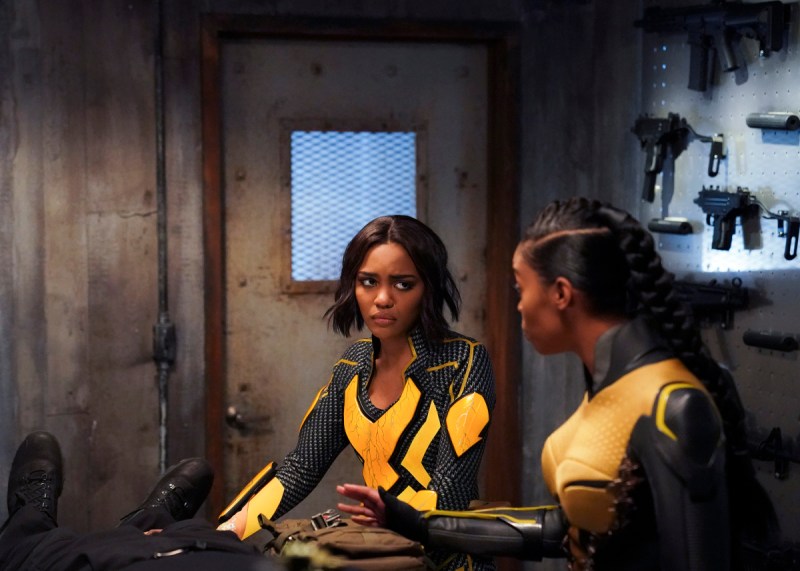 And while we are on the subject of fun superhero toys, here is Anissa’s new ThunderBike!!! 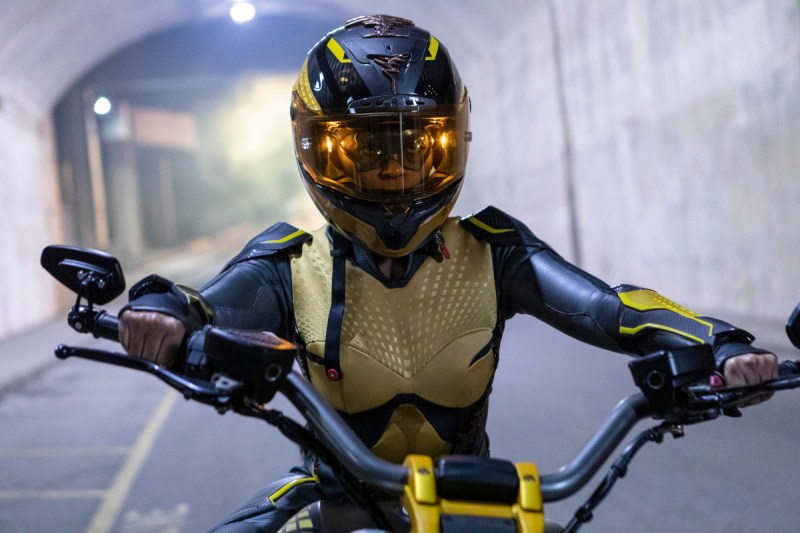 That sound you heard was a panty dropper reporting for duty.

Ok, Tobias Whale is in jail. Also, before I forget, Dr. Lynn “Mama Bear” Pierce got to kick Dr. Jace’s ass!!! A well deserved catharsis for us all. And in the final moments of the episode we are all treated to a cliffhanger via Shady ASA Agent Odell that just might make Season Three worth it after all:

The Markovians are here. And they mean war.

I can’t believe the season is over, my loves! We weathered a storm, but we weathered it together. I’ve had such fun. Even in the worst of times, writing these recaps was an absolute joy. I hope you feel the same way and that I’ve brought you laughs, and maybe even a few things to think about, in our time together. I know I’ll see you again soon.❤️❤️❤️

Carmen has written 477 articles for us.