The most generous thing I can say about last night’s episode of Black Lightning is that when the episode was over, and the narrator’s voice reminded us to “Stay Tuned for next week’s SEASON FINALE…” I laughed.

Flat out, in real time, howled in my TV’s face. And I don’t mean to be rude! There are few things that I hate more than clicking on a recap, ready to geek out and squeal with my fellow nerds about something I adored on television the night before, only to find my writer is too busy being cranky or nit-picking what went wrong to fully give themselves over to what went right. It’s a party killer! I strive very hard not to be that person.

Y’all know me, we’ve stuck out this season together – both the highs (Remember Perenna’s hair salon? Were we ever so young?) and the lows (Now that we’re at the end, really what was the point of our trip to South Freeland? Five bucks on a Starbucks gift card if you can tell me). There is no doubt that the second season of Black Lightning has been uneven, but I still think its best written superhero show on network television. It has believably threatening villains, grounded stakes, a loving family banded together, allegories of real life oppression. When those elements line up perfectly, Black Lightning is in a class of its own. Unfortunately, when those elements don’t line up and THEN the announcer reminds us that there’s only one episode left to monitor the damage control, I laugh.

That means that next week we have to cover: Jennifer’s faulty suit, the war against Tobias Whale, some kind of resolution to the Missing Grace Choi plot (ha! a girl can hope), the super human arms race that Tobias is brokering, Lala being back from the dead again, Freeland police officers still shooting unarmed black metas in the streets, and whatever is going on with Shady Agent Odell! Also, what the hell ever happened to the Markovians?? Where did they go? Are we supposed to care who they are?

There’s at least three or four episodes of plot left, but somehow the Black Lightning writers think they can fit it all in to just another 45 minutes!

Okay, that’s next week. You’re here to talk with me about this week and y’all this week was a mess! Still, there are a few nuggets of gold that could be found here, and I’m going to pull at them out and dust them off for us.

First of all, and closest to our hearts, Anissa has FINALLY figured out that Grace has been a shapeshifter this whole time! While rehashing her crazy search for her missing girlfriend with her Uncle Gambi, Anissa mentions this incredibly strong old Asian man who met her punch for punch, along with a decomposing horse (seriously, I’m still not over how absolutely gross that was).

Gambi goes, “Hmmmmm that sounds like some shapeshifting activity to me! Maybe the horse was a shapeshifter? Shrug Shrug who knows? Back to my work in the Batman’s lab.” 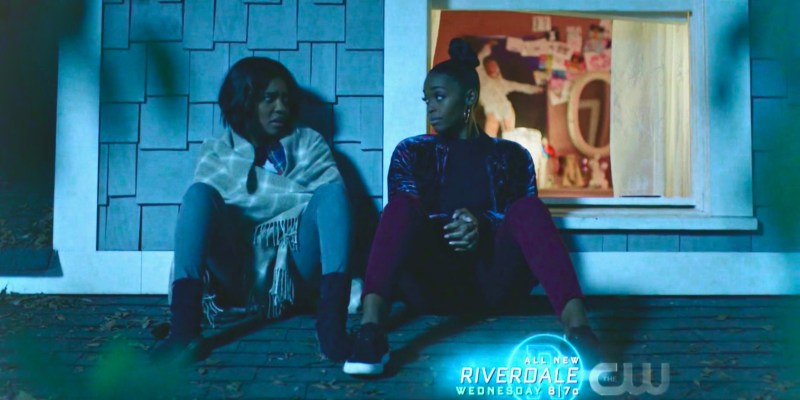 Queen Bey and Solo claim to be the greatest sister duo ever, but can either of them conjure lightning from their hands? I think not.

Later, while sitting on the roof of the Pierce house and goofing off with Jennifer, Anissa remembers a key detail that I’ve been waiting for her to pick up on for at least three episodes now: Grace’s eyes! Specifically, that Grace’s eyes flashed bronze that day they were in the park together! We’re all treated to a flashback of the day my heart broke. Anissa and Grace holding hands in the park and looking at each other all lovey-dovey googly eyes. Grace’s eyes flashing. Grace turning her back to fake a cough. Anissa joking that it must have been the sun caught in her face.

Then the camera cuts to last week, when Anissa was banging on the door of that abandoned apartment looking for Grace. There’s the older Asian man. When Anissa asks for Grace, his eyes flash the same color bronze. He slams the door in her face.

Suddenly everything for Anissa makes sense. Grace also has powers! She was scared to tell Anissa the truth! That’s why she ran away. After all, Freeland’s a political climate where supercharged humans are getting gunned down in the streets or experimented on like lab rats. That’s all on top of Grace’s own personal history with trauma. How could she have ever known that Anissa would still love her? Of course she ran!

Now Anissa knows what she must do, she has to find Grace and tell her the truth. By letting Grace know that she’s Thunder, she can help her feel less alone in this world. She can bring her in. She can help keep her safe and loved. They can be great together once and for all.

One last small hiccup in that plan (well other than the fact that Anissa hasn’t actually found Grace yet and there’s only one episode left hahahaha) is that to tell Grace that she’s Thunder, Anissa will have to break the Pierce family rules.

Oh yes, the Pierce’s have RULES now? Did I forget to mention that? Jefferson called his daughters together for family dinner and told them that despite his urge to keep them safe and away from the brewing war against Tobias, he knows that he can’t. Instead, both Pierce parents have developed a set of supercharged ethical guidelines:

1. No one goes off on a super mission by themselves without backup. (So no more Black Bird-ing around for Anissa, sorry. The eldest daughter rightfully points out that she’s an adult and can make her own choices, but Jefferson counters that while the powers may be her own, her suit is still a part of the family trust and in Gambi’s care. My favorite detail? Lynn and her best friend the rifle can count as backup if the time calls.)

2. Everyone must keep their super powers a secret. (Hence the Grace Choi wrinkle. Besides, with Agent Odell filming the family’s every move and listening in on their calls, I don’t think the Pierce family secret will remain one for much longer)

It’s on the last rule that Jennifer calls bullshit, and honestly I agree with her. I’m not saying that I support vigilante violence, but here’s the thing: Some villains have to die. Tobias Whale is one of them. I’m not sure why Jefferson is being so stubbornly obtuse about this? I understand that superheroes don’t generally kill, but Tobias has made it abundantly clear that no other alternative will work on him. It’s time to take care of business.

Luckily for all of us, Lala is very firmly on the path of  Kill Tobias, and nothing is going to get in his way. His maker, Eddie Kaaaang, delightfully quotes Lady Eve (may she forever Rest in Peace) in explaining his real objective to the audience: Only after killing Tobias will Lala find peace. This leads to Lala going head-to-head with Cutter’s knives and winning, thoroughly freaking out my favorite assassin, who grabs Tobias and makes a run for it.

Leaving his secret villain hideaway as a fugitive, Tobias is blinded by a light brighter than the sun — even though it’s the middle of the night outside. He asks Cutter what the hell is causing the glow. She says not to worry about it, but I think maybe Tobias should worry at least a little. Rules be damned, Jennifer Pierce will not stop until Tobias Whale is six feet in the ground.

That is, unless her malfunctioning suit stops her before she can get to him.

And that cliffhanger, Jennifer alone in the middle of the night outside of Tobias’ enclave, writhing in pain with Jefferson and Gambi running to save her, is where we leave off. Until next week, when somehow all these puzzle pieces are going to slam together. It’s either going to be a beautiful cacophony, or just a lot of noise.

WHEW BOI! Only time will tell! Love you all, can’t wait to see you at the finish line. XOXO.