At age 18, Bella Thorne is an accomplished dancer, actor, singer and Disney star, and now, thanks to Twitter, we also know she’s an accomplished bisexual as well. The star of the Disney Channel’s Shake it Off, a dance show co-starring Zendaya, answered a fan who sent the question “are you bisexual?” with a simple “yes.”

Obviously, coming out isn’t really ever simple, and I applaud Thorne for her courage. She recently broke up with her long time boyfriend, and the spotlight is on her. It must be especially difficult since she’s so young, at just 18 years old, and is a woman in Hollywood. Congratulations and we’re proud of you. We hope your life in the bisexual community and LGBTQ community is a good one and that you find acceptance and support and affirmation. You deserve it. 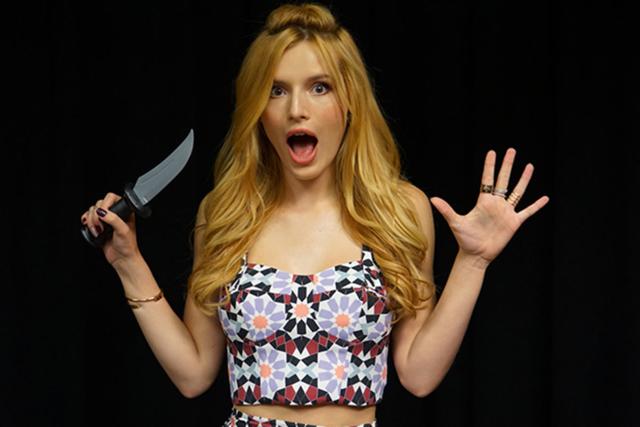 Thorne in a promotional image for Scream.

Thorne has been in the spotlight for a long time, and scored her first major TV role on the show Dirty, Sexy, Money, costarring trans actress Candis Cayne, in 2007 when she was only 10 years old. Since then, she’s also had roles in TV shows like My Own Worst Enemy and Big Love, as well as movies like Alexander and the Terrible, Horrible, No Good, Very Bad Day, Blended, and last year’s Mae Whitman high school comedy The Duff. She then started co-starring in Shake it Up in 2010, which is when her career really started taking off and she started also dancing and recording music (as Disney stars are wont to do). Her single “Watch Me” reached number 86 on the Billboard Hot 100 chart. Autostraddle readers might recognize her from her role as Nina on the MTV television adaption of Scream.

When the news broke, fans on Twitter were very supportive, so much so that Thorne Tweeted out “Aww thank you for all the accepting tweets from everyone. I love you guys” followed by three heart emojis and the hashtag pride. Noted funny person, celebrity millenial and bisexual social media superstar Gaby Dunn also offered her support, noting that Stephanie Beatriz, Mara Wilson and Evan Rachel Wood Bisexual are also there at the party. Hey, don’t forget Rebecca Sugar and Aubrey Plaza, who also came out as bisexual this summer. Now that sounds like a party I’d love to be at, unfortunately, I’m just a lesbian.

Again, congratulations to Bella Thorne, we wish you happiness, joy and success.