Meet-ups can be hard — How do I plan? Who should I invite? How do I get the word out? Where do I do it? Will anyone like it? Am I too shy to speak to anyone? Trivia meet-ups can be even harder — What questions do I ask? What if it’s too hard? How do I plan the scoring? How many rounds? Who will MC? Can my venue accommodate a sound system?

We learned the hard way that asking loyal readers and strangers on the internet to host a full-on trivia meet-up was a little too daunting – while many, many Autostraddle readers seemed extremely excited by the idea when it first took shape on Twitter, it was arguably our least popular meet-up event ever. Because of this sad truth, our community editor Vanessa was particularly ecstatic that I not only volunteered to host a trivia meet-up in D.C., but that it was wildly successful and very fun. At her request, I put together this how-to guide, so perhaps next time we attempt to host a trivia meet-up month more people will feel comfortable and ready to host events of their own! Be the meet-ups you want to see in the world, you know?

While all of the above concerns are extremely valid worries, don’t let that running anxiety-script stop you in the future! With a little pre-planning, you can end up surprising yourself with a really awesome meet-up, and have a great time to boot! The Autostraddle Trivia Meet-up I hosted here in D.C. was so, so fun. Here are a few things I did to set myself and my trivia meet-up up for success. 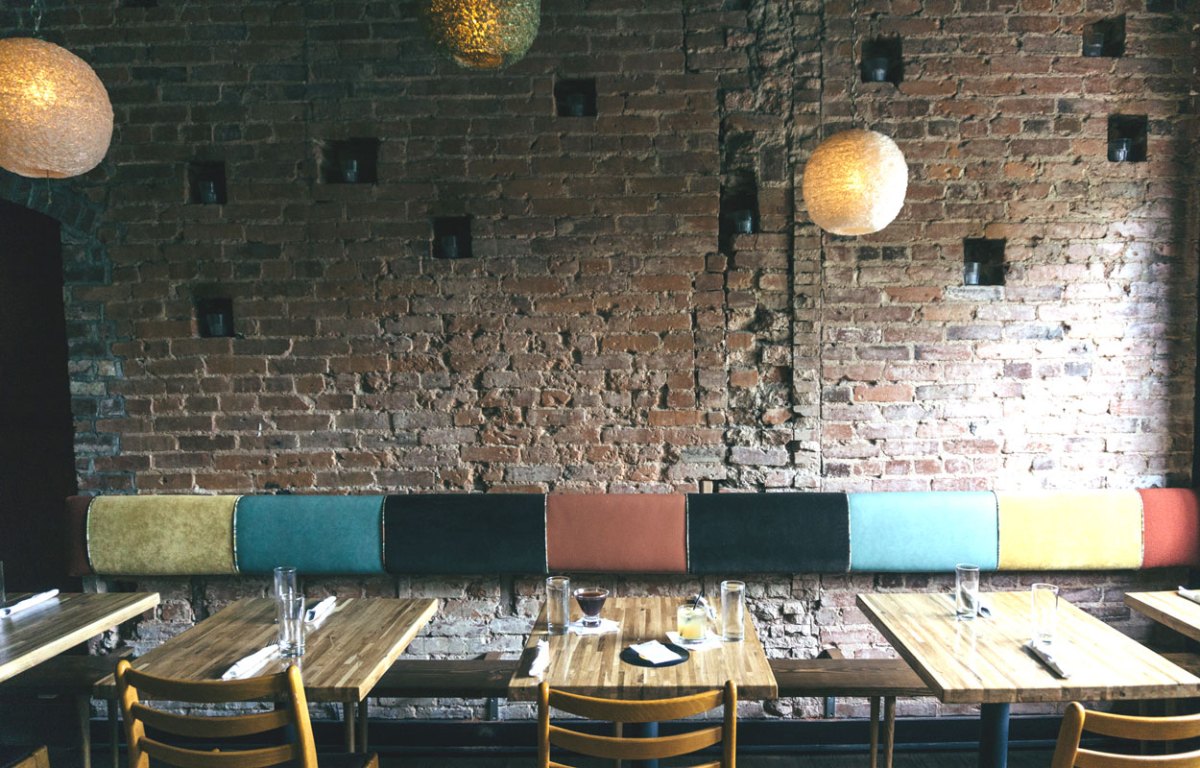 Plan Early and Find Your Space

Give yourself some time to get everything in order, and to have backups in case something falls through. I gave myself a lead time of a month, but a few weeks should be fine!

The very first thing I did was look for a venue. I wanted a space that was both queer-friendly and could accommodate a trivia night. So, I looked up queer events in my city on Facebook. At first, I wanted to do it at a bookstore/comic book shop here in D.C., Fantom Comics, but they never got back to my inquiry emails (womp, womp). So I kept looking, and landed on Songbyrd Music House and Record Cafe, a coffee shop/bar/music venue that was conveniently near my house and that I saw had previously hosted both queer events AND trivia events — so I knew they could do it. They answered my email more promptly, and after figuring out a date that worked for their calendar, I jumped on the phone with their events person and figured out the details: what time, where it was, what I would need to bring and what they would provide – things like their speaker/mic set up and if they had a computer or iPad that could play Spotify. The Songbyrd Cafe people working with me were awesome, and they offered me a $25 gift card to give away as a prize. The day of, I showed up an hour early and got the in-person rundown on their speaker setup — more on that in a bit. 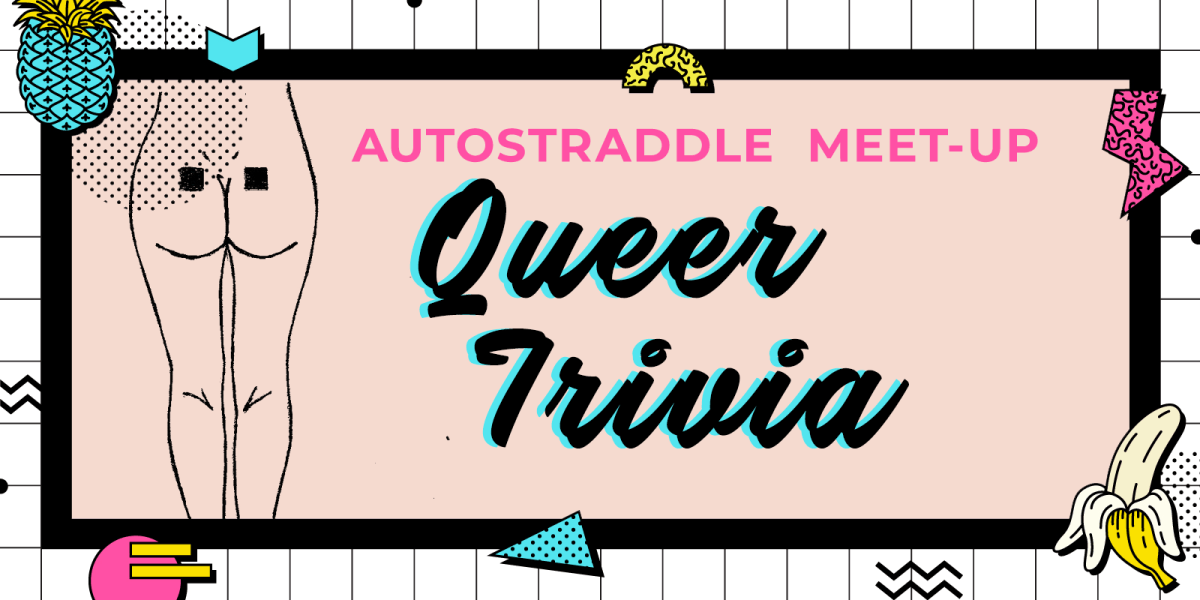 Getting people to come

Next, I made a Facebook Event and added the Songbyrd events people as moderators. Luckily, Sarah, our wonderful Autostraddle design director, had provided us images for Facebook cover images. I also set some ground rules to the event: don’t have teams of more than six people, find people to make a team with via the event or by arriving early, be nice to each other, etc.!

Then I added myself to every queer Facebook group I could find in my city — including a D.C. Straddlers group, heyyy! — and posted the event to them. I also submitted the event to Autostraddle.com here! Then I sat back and watched in excitement/horror as more and more people noted that they were attending.

This can be the most intimidating part — how to come up with the right questions, and how hard (or not) to make them? I decided I would do six rounds, with a break for scoring in-between the third and fourth, and that one round would be a music round. I picked some overall themes — Sports, Music, Politics, Literature, Autostraddle, and History. I also wanted all of the trivia to be queer, and I’ll admit it, I had to do a lot of googling! Each round was 8-10 questions, and I tried to make sure I had a few “gimme” questions in every round. For answers that might be a little more obscure, I tried to add extra context to the questions, so people could make educated guesses.

But I also realized that I don’t know everything! Fellow Autostraddle writer Carrie helped me out with some questions with some of the stuff I wasn’t as sure about: sports, some Autostraddle trivia, and her specialty, politics!

Finally, I mocked up some simple answer sheets that had “Autostraddle Queer Trivia!” at the top and spaces for the team name, the round number, and 10 questions. I printed out a bunch and ran out the last round, so print out twice as many as you think you’ll need! Or, bring a ton of printer paper. And don’t forget to bring some pens!

One note for fellow Autostraddle trivia meet-up organizers and for my future self: I got a lot of feedback from my event participants that there wasn’t enough TV and movie trivia — something Autostraddle definitely covers a lot — so I’ll be adding that as a category or two when I next host a trivia meet-up – all L-Word round, anyone?! 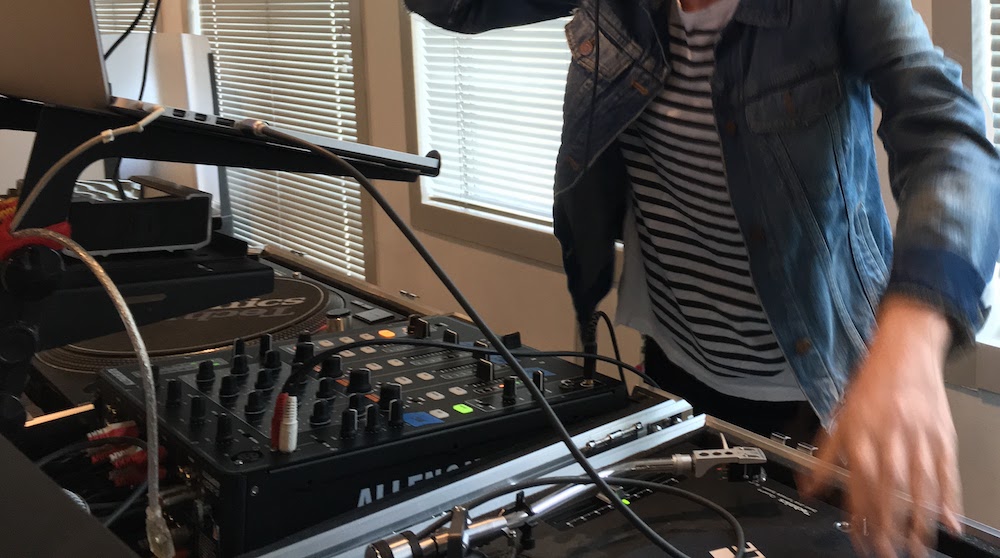 It can be really intimidating to sit in the DJ booth and MC an event, but usually, they have just one or two things you need to pay attention to: the volume knob for your speakers, and the mute button for your mic. Most places have a computer or an iPad set up where you can pull up a Spotify playlist, which is what I did. The most complicated that it got was when it was time for me to read out a question I’d just hit pause on Spotify and unmute my mic, then mute my mic, and hit play again.

Advanced Tip: For my third round, I did a music round! I made a special Spotify playlist, then played the first 30 seconds of each song twice for the questions. It was pretty manual since I was basically hitting pause at 30 seconds, replay, pause at 30 seconds, next song — and so forth. I let the round be a double-point round and gave the teams one point for naming the song and one for naming the artist. If you have extra time and know how to edit music, you can use something like garage band to make the clips yourself, which doesn’t force you to use the first 30 seconds of every song (a choice I basically made to make it easier on myself). 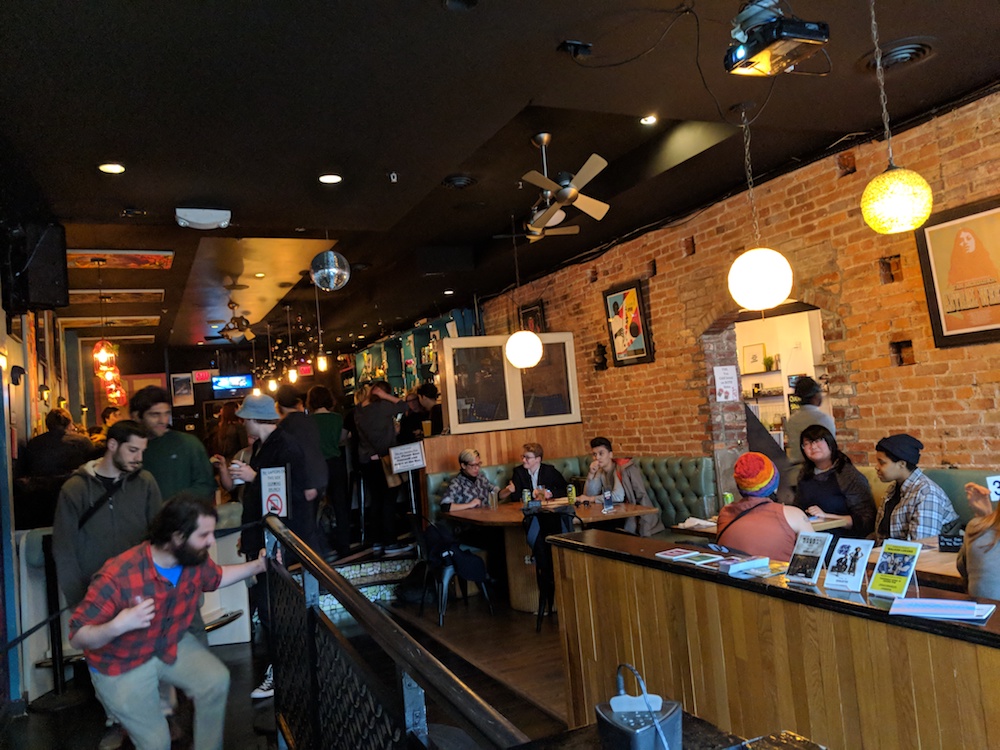 Songbyrd Music House and Record Cafe, the day of the trivia meet-up

Getting there, I was really nervous — What if no one came? What if I messed up? Luckily, I have a few years of being an avid trivia-goer under my belt, and even when I arrived an hour early, I started spotting some alternative-lifestyle haircuts. I grabbed myself a beer, looked over my questions, and let myself relax.

The event ended up having around 20 teams (!!!), each one of them with a pretty hilarious name — standouts included “Hermione Granger and the Cloak of Bi-Visibility” and a team just named “Dana Fairbanks” (who put her as the answer for any question they didn’t know — made me feel bad that I hadn’t put her as the answer to a single question!). Since there were so many people, I let everyone know that I’d repeat each question only once, and the group was lovely so no one really gave me a hard time.

And y’all, the night flew by! It was so fun to quiz everyone. I had a wonderful time, and nearly everyone asked me when I was going to do this again (let me sleep for a few days straight first). One group was celebrating a birthday and brought out a cake halfway through a round, and in the end, there was a tie for first place that I wanted to resolve with a dance-off, but one team had already left (who leaves before an event ends?? Where did y’all go?!)!

To be fair, that was probably my fault, and one of my lessons learned — I scored every answer sheet myself in a notebook, which took me quite a while! I read out the answers and the team scores after the third and sixth rounds. On the one hand, this made for a nice drink break/intermission during the event, but it definitely dragged the ending for a little bit. In the future, if there are that many people, I’ll either have an assistant scoring rounds as they come in or use the traditional pub-quiz rules and let teams score each other’s rounds.

Though this is the type of meet-up that definitely takes a little more planning than a potluck or a picnic, it is absolutely worth it, and such a blast for everyone who attends! It takes a lot of the awkwardness of meeting new people out by giving some structure and some good competition. And we all know a lot more queer trivia than we did before, which is a plus whether you’re trying to impress that babe on Tinder or hoping to score 100% on every quiz ever published on Autostraddle.