The first time I ever voted, I arrived at my polling place in a wheelchair. I was recovering from spinal surgery and not quite back to walking full-time, but refused to delay my participation in democracy. Not when I’d been waiting on this day for the better part of a year. Plus, accessible voting booths seemed like a reasonable expectation, especially in an affluent Los Angeles suburb. That, I reasoned, is what the Americans With Disabilities Act is for.

You can see where this is going. Instead, I got two rows of standard booths and a poll worker who looked like she’d just been sprung with a pop quiz. We exchanged a weighted silence — each of us praying the other would break our impasse — before she offered the one “solution” I didn’t expect:

“Do you want me to fill it out for you?”

That’s right: her definition of “access” was “hand over your ballot and take my word for it.” Which, honestly, is a spot-on summary of the political process if you’re disabled and queer in America.

I’m not one of those people who recoils at the word “politician.” I love politics — the wonky ins and outs, the human drama, the potential to push us forward — and know what it feels like when they change your life, for good and for ill. The ADA passed when I was about two years old and made sure my local public schools’ doors were literally and figuratively open to me. I sailed through my education blissfully unaware that I might not be there if a Republican President and Democratic Congress hadn’t found a way to work together. Then there was Prop 8, a sucker punch from my home state that validated the politics of fear, followed by the incomplete but incredible victory of Obergefell years later. In the interim, the Affordable Care Act gifted me the sense of security my able-bodied peers take for granted. And then, of course, there was election night. I don’t have to tell you which one.

When your rights ebb and flow with the political landscape, it really matters who’s in office. I owe a lot to politicians and they know it. I’ve felt downright pandered to during the last few Democratic National Conventions. Disabled gay woman under 35? Check, check, check, and check. Promising to “fight for LGBT people and people with disabilities” is standard procedure now. And you know what? Great! Because I’m old enough to remember when at least half of that promise never made the convention stage — at least not if you wanted to win. So I get that cynicism is in, but that’s not what I’m about. I believe in the people I vote for. But don’t think I haven’t noticed that almost none of them know what it’s like to live in this body.

I’m probably not the only one here wrestling with the idea of an office run. Maybe your friends sent you this article too, or this podcast, or these texts: 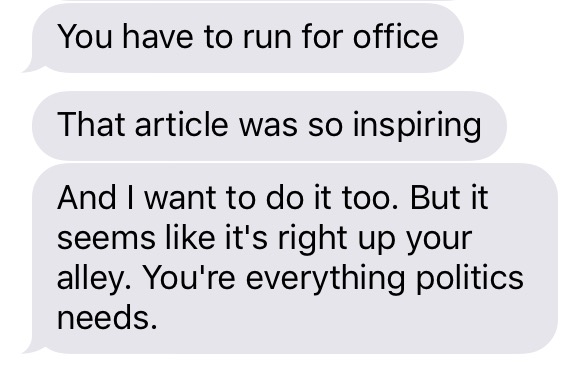 But maybe you, like me, still can’t completely talk yourself out of the possibility.

It’s true that we all need our qualified friends to run right now. But it’s equally true that the fight won’t end in 2018 or 2020 — so neither can our list of potential candidates. And I think it’s past time those candidates have some firsthand knowledge of, say, how much it costs to spend a week in the hospital, or how an Individualized Education Plan works, or what it’s like when your polling place wasn’t built for you.

I want to run because someone like me has to. I realize that more with each leak that drips from this toxic disaster of an administration — and, to be honest, each Democratic Senate healthcare panel that has no disabled people on it. I’m done putting my faith in well-meaning surrogates. That’s not enough now, and it never really was. I’ve got the bones of a good candidate: people like to talk to me, I listen well, I actually enjoy public speaking, and I know a lot about issues that matter to me. I’m intentional with my words and confident in my perspective, but careful to acknowledge when it’s not the most important one in the room or could use an overhaul. And frankly, I want to learn and I want to help people, and our government could use more of both at every level. Yes, there’s a lot I don’t know yet — but self-righteous blowhards have run (and won) on less for centuries. Or, y’know, last November.

I want to run so that the opportunities I’ve had — education that made me a critical thinker, healthcare that saved me when it counted, and a home state that values my civil rights, to name a few — become standards rather than exceptions. That’s not going to happen until and unless people like me get over our doubts and get into the room. I can read up on policy and go to City Council meetings. I can learn to write a fundraising email and prep for a debate. None of that is beyond me. And if nothing else, all the groundwork for running will make me a more engaged, informed, and impassioned citizen.

I didn’t let the poll worker vote in my place that day, and I can’t cede my political future to other people now. There’s too much on the line for me and the ones I care about. I owe it to myself to find out how much I can accomplish when I don’t shy away from the most obvious path just because it’s also the most daunting. Learning how to run will be an uphill battle — but I’ve won a few of those before. I come from two of the most adaptable and resilient communities in America.  That has to count for something.

I’ll be recapping my experiences with the She Should Run Incubator right here on Autostraddle very soon. In the meantime, if you’re also thinking of running, please make yourself known so I feel less alone in this gargantuan pursuit; if you know someone who has, or is, tell me about it; and please send me your best advice, expertise, and campaign slogans. I can’t be the only one among us who’s having this conversation with herself right now.

So here: I’ll go first, and let’s see what happens.