In the bid to cement its position as one of the absolute worst places for LGBTQ people in the US, the Michigan House of Representatives has approved a bill that would functionally legalize discrimination throughout the state, so long as it is based on a “strongly held religious belief.” HB 5958, also known as by the spin-tastic title of the “Religious Freedom Restoration Act” was introduced by House Speaker Jase Bolger in response to a renewed push by Michigan Democrats to add protections for sexual orientation and gender identity to the state’s civil rights law. While the proposal to add LGBT protections has not yet been allowed to come to a vote, the House approved the religious protections bill on December 4th along straight party lines.

While proponents of the RFRA have been quick to claim to that the bill is not a “license to discriminate,” the text of the bill is very similar to a bill that was approved in Arizona earlier this year but ultimately vetoed by Governor Jan Brewer after a loud public outcry. The Michigan version of the bill is even more troubling, as it contains an additional cause that could be construed to grant even wider latitude to those who object to providing services to members of the LGBTQ community, especially in the wake of Burwell v. Hobby Lobby. The clause reads:

“This act shall be construed in favor of broad protection of religious exercise to the maximum extent permitted by the terms of this act, the state constitution of 1963, and the United States constitution.”

While some of the pushback against this bill has been somewhat hyperbolic, there are some very real and very frightening risks to a bill such as this become law. First and foremost, the bill could provide loopholes for businesses to ignore the patchwork of local non-discrimination ordinances that current protect at least a portion of Michigan’s queer residents. The ACLU of Michigan has an even dimmer view of the situation. In their analysis of the bill’s potential fallout, they conclude:

“If it passes, it will permit people to take advantage of the law to claim that their religion gives them the right to ignore criminal and civil laws – non-discrimination laws, child abuse laws, and domestic violence laws. This means a police officer could refuse to defend a mosque or synagogue, a school guidance counselor could deny help to a gay student, a landlord could refuse to rent to a single mother, or a man could claim that he has a religious right to discipline his wife and kids as he sees fit — all based on their religious beliefs.”

There have been a number of blog posts about the bill floating around social media claiming that the bill would allow healthcare professionals like EMTs to let us die. There is no specific language in this legislation that would specifically empower healthcare professionals to elect not to provide life-saving treatment. However, it’s easy to see why queer folks and women in Michigan are concerned about how this law could affect their healthcare. Just two years ago, the Michigan GOP attempted to pass a bill through legislation that would have specifically allowed healthcare professionals to refuse to give medical care that violated sincerely-held religious beliefs and barred their employers from disciplining them for doing so. While that particular bill failed to become law, Republicans in Michigan continued to demonstrate their intrusive, regressive nature earlier this year when they passed the “rape insurance” law, which bans Michigan health insurance plans from covering abortion for any reason (and requiring those with uteruses to purchase additional insurance to cover any potential abortion needs.) With such a rabidly anti-LGBT, anti-woman regime in place, the fears of the queer community are entirely justified.

The leadership of Michigan’s LGBTQ community continues to push back against the regressive efforts of the Republican-controlled legislature. Emily Dievendorf, Executive Director of Equality Michigan, pulled no punches in her criticism of actions of the Michigan legislature:

“House Bill 5958, the so-called ‘Religious Freedom Restoration Act’, is unnecessary, unpopular, and risks violating the basic principle that an individual’s religious beliefs should not be put ahead of the common good. LGBTQ advocates, religious leaders and victim advocates agree, if this bill becomes law, it will provide licenses to discriminate to people who decide that anti-discrimination laws, child abuse laws, and domestic violence laws do not apply to them. No Michigander should be denied access to services by government officials, turned away from a business, or evicted from their home, just because of who they are.” 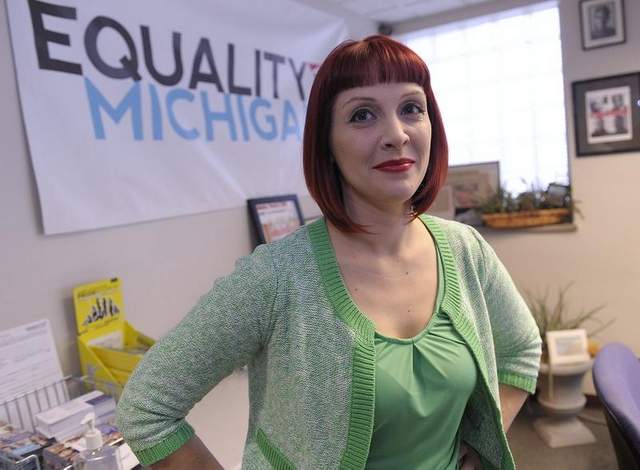 Amanda Niven, Director of the Trans* Leadership Project of Unity Michigan, was equally critical of the legislation:

“This so-called Religious Freedom Restoration Act is both dangerous and unnecessary. We are all free to put our faith in whatever we choose, and to live out our faith in our daily lives. That freedom has always been and continues to be constitutionally protected. In contrast, the LGBT community has no protections from discrimination in this state, with transgender people being at the highest risk for being fired, kicked out of their homes, denied services, and physically assaulted for who they are. We know most folks don’t want to use their faith to harm other people, but there are those few who would, and this bill gives them permission to do that.”

It’s key to remember that HB 5958 was introduced as a “companion piece” to the Democratic-lead proposal to add LGBT protections to Michigan’s Elliot-Larsen Civil Rights Act. Last month, Democratic Rep. Sam Singh introduced a proposal that would have added gender identity and sexual orientation to the list of classes protected from employment and public service discrimination within the state. Republicans submitted a counter-proposal that would have scrapped the gender identity protections and left Michigan’s transgender population out in the cold. Both bills were scheduled for debate in the House Commerce committee last week, but no vote was held. While testimony from numerous business and religious groups were heard, at no point were any representatives of the LGBT community permitted to testify before the committee. Following the hearing, Committee Chairman Frank Foster announced that there were not enough votes to advance the measure. Speaker Bolger re-asserted his claim that trans people did not need protections, re-stating his opinion that trans people have sufficient protections under existing court rulings. He went on to blame the death of the bill on “leftist-extremists” for demanding protections for an “already-protected group”. The “extremists” he refers to are, in actuality, a coalition of nearly every single LGBTQ group in the state of Michigan who have banded together to support and promote only a fully inclusive bill. Furthermore, given the recent Federal court ruling that Title VII does not protect transgender people, it’s difficult to see how Bolger could continue to hold such a misguided view.

With the civil rights amendment stalled in committee, and the RFRA on its way to the state Senate, it’s entirely possible that the legislative session could end without any protections for the highly vulnerable LGBTQ community and a deeper enshrinement of conservatives right to treat us as second-class citizens.