It’s been a week of mixed feelings for the Michigan LGBTQ community. Yesterday, a federal judge struck down a Michigan law that banned municipalities and public schools from providing health benefits to domestic partners of employees. Meanwhile, the state legislature is finally looking to amend Michigan’s civil rights bill, but there’s a push to exclude protections for trans people in that bill.

Back in 2011, Republican Governor Rick Snyder signed a bill which banned all Michigan municipal governments and public school districts from providing insurance benefits to the domestic partners of employees. With gay marriage banned in Michigan by a 2004 constitutional amendment, these kinds of domestic partner benefits were provided primarily with the intention of being inclusive of queer employees. The GOP, who control the Michigan Legislature, claimed the bill was necessary as a matter of “fiscal responsibility,” though many cities issued formal rebukes following the approval of the legislation. The ACLU filed a lawsuit on behalf of four Michigan LGBT couples in 2012, claiming the law was discriminatory. On Wednesday, federal District Court Judge David Lawson issued a ruling striking down the law as unconstitutional.

Lawson’s ruling held that the state unfairly targeted queer couple in this bill, and that the justifications of “encouraging heterosexual marriage” and “cost savings” did not hold water. He writes:

“Public Act 297 sends a message to committed gay and lesbian partners that the State of Michigan is willing to invest in the health of married heterosexual couples, but is unwilling to invest(or allow local governments to invest) in the health of similarly-situated same-sex partners who cannot marry. How does that promote traditional marriage? Several of the plaintiffs, who are covered by their partners’ health insurance, have health conditions that require ongoing monitoring and care, including arthritis, glaucoma, high blood pressure, and fibroid tumors. How does prohibiting local governments from furnishing health insurance to those partners benefit the State in any way? And how does this justification amount to anything more than a desire to impose a deprivation upon a disfavored group?”

Lawson wrote another strongly-worded rebuke of the state government in his decision earlier this year that overturned Michigan’s gay marriage ban. That decision was recently overturned by the 6th Circuit Court.

Unfortunately, the press for comprehensive state-wide discrimination protections for the queer community isn’t going as well. There was some initial optimism for amending the Elliot-Larsen Civil Rights Act (Michigan’s law that covers things such as employment and public accommodation discrimination) following Governor Snyder’s mentioning it as a priority during the state’s lame duck legislative session. Democrat Sam Singh introduced a bill earlier this fall that would amend the act to include protections for “sexual orientation, gender expression, and gender identity.” However, it now appears the Republican caucus is set to disrupt those efforts and exclude the trans community. GOP Rep. Frank Foster announced a competing bill today that includes protections only for sexual orientation, over the insistence of LGBTQ advocacy groups all over the state that gender identity must be included. Frank told local media:

“I had a good conversation with my girlfriend this morning that perhaps we’re going down the right road. Not everyone is going to be happy, but I still believe we’re moving an issue forward that’s been a long time in the making.”

“By deciding to leave gender identity and gender expression out of the bill, the sponsors of this bill have handed those who wish to discriminate against lesbian, gay, bisexual, and transgender people a huge gift. Either intentionally or naively, this bill accomplishes none of its stated goals. We have no intention of leaving the transgender community behind. We also are faced with the reality today’s glaring omission impacts the entire community. As LGBTQ victim and legal advocates can tell you, many lesbian, gay, and bisexual people are also fired because of their gender expression, any bill which is not fully-inclusive is inadequate.” 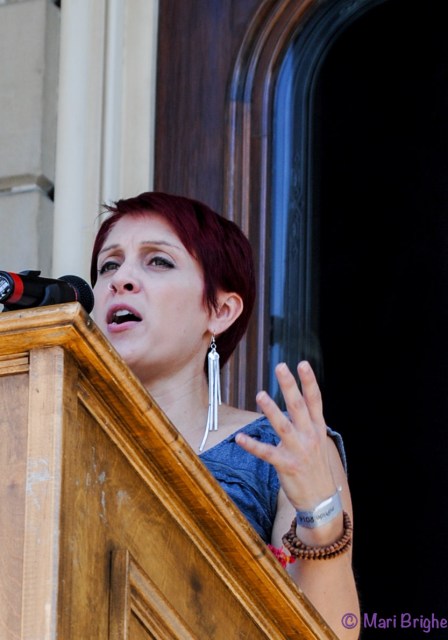 While Michigan’s business community has been strongly supportive of comprehensive protections, AT&T Michigan President Jim Murray, who also co-chairs the state’s Competitive Workforce Coalition, has sided with the Republican lawmakers, citing his belief the the recent EEOC rulings in favor of trans employees were sufficient coverage. In response, a coalition of Michigan LGBTQ organizations has set up a website to raise awareness of the need for trans protections, and to pressure AT&T into changing their position. AT&T had previously signed onto a statement supporting the comprehensive bill, and Dievendorf had called them out on their reneging on the promise:

“AT&T has made a strong and admirable commitment to equality and inclusion for all LGBT people. But we fear the face of their commitment is in jeopardy in Michigan – putting the wellbeing of our community in jeopardy as well. We will not stand for this and call on AT&T Michigan to reflect AT&T’s inclusive values and not an intention to harm Michigan’s LGBTQ communities.”

The prospect of meaningful policy change was further eroded when Michigan House Speaker Jase Bolger introduced a bill to protect business’s right to discriminate against the queer community — so long as it’s based on a “strong held religious belief” — titled the “Religious Freedom Restoration Act”. Bolger believes the bill to be a necessary companion to amending the ELCRA, stating “Nobody should be discriminated against because of who they are, just as nobody should be forced to violate their faith.” He opposes transgender protections because he believes trans people are already protected under inclusion of the term “sex,” stating he trans-specific language “is not necessary, therefore it should not be included.” Bolger has also insinuated that Michigan LGBTQ organizations are prolonging the fight to maintain their relevance. Dievendorf dismissed that criticism and fired back:

“Today’s bill is an unnecessary and wasteful effort to steal attention and credit away from a far more effective bill introduced earlier this year in both the Michigan House and Senate. Equality Michigan, our membership, and our coalition partners will not accept or ignore legislation which not only splits our community up and leaves transgender people behind, but does not even deliver on its promises. Speaker Bolger’s claim that we are only continuing this fight for our own gain is correct. We seek to gain our equality and we don’t feel it should arrive for some now and some later when the whole can be protected from unnecessary vulnerability today.”

Michigan Democrats have insisted that will kill the bill if it does not include gender identity protections, and push for a state-wide ballot measure on the reforms in 2016.