“And did you fulfill all of your desires?” an interviewer asks the late Susan Sontag in the trailer for Nancy Kates’ new documentary on the American writer, filmmaker, and activist Regarding Susan Sontag. Her eyes dart from side to side intently, her features soften, and she cracks a smile as she responds. “Certainly not.”

Born Susan Rosenblatt in 1933, Sontag knew from an early age that her yearnings — unlike her time allotted on this earth — were far from finite. When the literary icon died after her third battle with cancer in 2004, she was overwhelmingly known for her criticism: works such as Against Interpretation (1966), On Photography (1977), Illness as a Metaphor (1978), and a series of scathing post 9/11 essays. Yet her two posthumously-published volumes of journals offer the most insight to just who Sontag was. Her old notebooks are rife with lists: of films she’d seen, the plotlines of novels she planned to write, of vocabulary she was learning (one list of words from her late teens included the queer slang of 1940s Berkeley, where she was studying), of books she wanted to read.

Before she turned twenty, Sontag wrote herself a manifesto within those same pages:

Do stuff. Be clenched, curious. Not waiting for inspiration’s shove or society’s kiss on your forehead. Pay attention. It’s all about paying attention. Attention is vitality. It connects you with others. It makes you eager. Stay eager.

…All while continuing to enumerate her desires:

Qualities that turn me on (someone I love must have at least two or three):

These journal entries, read by actor Patricia Clarkson (The Untouchables, The Green Mile), form the backbone of Regarding Susan Sontag. The meat of the documentary includes rarely-seen clips of Sontag at events and in interview, archival footage of the cities in which she resided, and creative sequences which aren’t typically used in biographical documentaries (in one particular scene, Sontag’s profile is formed from the texts concerning her illness; another depicts sand flowing over her photo as though it is within an hourglass and time is running out). Regarding Susan Sontag also resists linearity. Interviews and photos fall in and out of sequence to emphasize how the author often contradicted herself (for example, Sontag disavowed the notion that she was a pop culture aficionada in her later years despite her initial works being so rooted in the defense of the seemingly vapid) and how her present often hearkened to her past.

While it would be easy to create a sterilized portrait of the accomplished intellectual, Kates refrains from doing so. No subject is too delicate: Sontag’s ego, contradictions, futile attempts at becoming a successful novelist, inability to play nice with other feminists, and infamous glass closet are all touched upon during Regarding‘s 90 minutes.

I found the documentary’s interviews with the family members, partners, and scholars who were closest to Sontag especially enjoyable. Despite “Susan Sontag” and “Annie Leibovitz” frequently being uttered in the same breath, Leibovitz’s only appearances in Regarding are in the form of decade-old interview footage concerning her professional collaborations with Sontag. Surprisingly, her absence is not a glaring one. 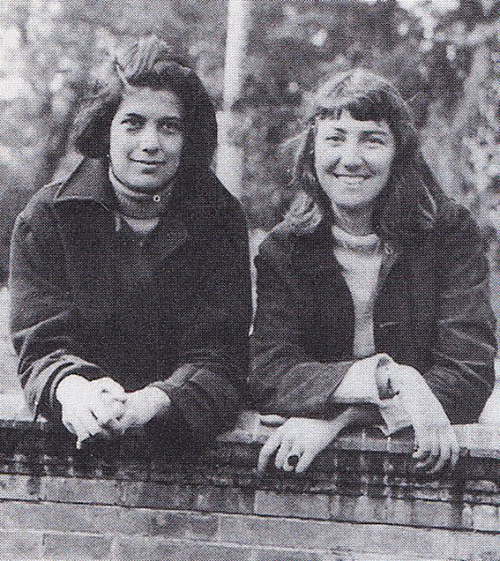 In Regarding, Kates interviews Harriet Sohmers, the art model and writer who was Sontag’s first lover. In revisiting Sontag’s first time at a gay bar as an innocent teen and their first time having sex, Sohmers is anything but shy and brings much-needed levity and theatrics to the tale of a woman who was notoriously serious. Other lovers are featured, including postmodern dancer Lucinda Childs and Cuban-American playwright Irene Fornes (with whom Sohmers also had a relationship, thus solidifying the fact that no queer woman is ever truly exempt from the lesbian spit chain). Despite not coming out until several years before her death, two of her most pivotal works — AIDS and Its Metaphors and “Notes on ‘Camp'” — arguably came into fruition because she was immersed within queer community.

Sontag’s life could easily serve as prologue to Roxane Gay’s Bad Feminist. In Regarding, Sontag smugly revisits the time her stepfather warned her that she’d never find a husband if she kept reading feverishly (she kept on reading, married, had a child, and divorced–all before her mid-twenties), and author Sigrid Nunez recounts the time the that Sontag destroyed a long-standing tradition by joining the men for cigars after a dinner party rather than lingering with the women in a separate room. But despite referring to herself as a “militant feminist” and having no qualm with taking the likes of Norman Mailer to task, she also struggled to connect with other women, whom she often found less intellectual and more petty. There was also the issue of racism, one which Sontag spoke out against during the Vietnam War (“the white race is the cancer of human history”) while remaining oddly silent during America’s own domestic civil rights struggle.

As Kates mentioned in interview at the Sheffield Doc/Fest, you can count on “one hand” the number of documentary films about prominent American lesbians: Edie and Thea: A Very Long Engagement, A Litany For Survival: the Life and Work of Audre Lorde, No Secret Anymore: The Times of Del Martin & Phyllis Lyon, and a promising film on a playwright Lorraine Hansberry (writer of A Raisin In The Sun) which is still in its crowdfunding stage. It isn’t often that herstory makes it onto the big screen, let alone the small screen. Viewers of Regarding are in for a real treat.

Regarding Susan Sontag, a documentary by Nancy Kates, will premiere on HBO December 8 at 9 PM EST with additional air dates throughout the season.