Back in March, news broke that ESPN would launch a full-scale, season-long fantasy WNBA game. Corners of the WNBA fandom had been developing their own fantasy competitions for years but this was the first time the “worldwide leader in sports” would join the fray. Soon after I posted a link to the news into the Autostraddle Slack, Carmen jumped in to express her surprise and immediately committed to playing once the game launched.

“LISTEN I KNOW NOTHING ABOUT SPORTS BUT I AM SO READYYYYYY!! How do I pick Candace Parker for all five starting line up spots?” Carmen exclaimed, cementing her metamorphosis into a full-fledged “sports gay.”

Of course, Heather and I were quick to join in on the fun. Later — closer to when the WNBA season started — we reached out our Autostraddle team and checked to see who’d be interested in joining our fantasy league, which we affectionately dubbed “Future Trophy Spouses.” ESPN’s fantasy system only allow for 10 teams, so we added seven more Autostraddle writers to our league: A.Tony, Carly, Chinelo, Darcy, Nic, Sally and shea. Everyone had their own reasons for wanting to participate: some are longtime WNBA fans, others are newcomers and some are just here to fawn over beautiful, athletic women.

We held our draft on May 5th….and, much to Carmen’s chagrin, she did not secure the rights to Candace Parker. Shea was able to draft the reigning WNBA triple-double leader with the overall #1 pick. ESPN set the draft order and with every successive round, the draft order snaked back on itself…so, for example, the person who picked last in the first round got to pick first in the second round.

Everyone came into the draft with different strategies: Sally tried her best to get as many gay WNBA players on her roster as she could. Carmen tried to get all the gay rookies on her roster. A.Tony honed their strategy from watching their dad do fantasy football leagues over the years: don’t put all your eggs in one basket, they advised. Through nine rounds of picks, we all filled our rosters with the best looking WNBA players.

“Wow, this was a rush!” Chinelo said after making all their picks. “The draft picks went fast, and towards the end I panicked and clicked randomly which I think is the exact opposite of what you’re meant to do. Ultimately, I have no idea what I did, but I had a lot of fun, so that’s great.”

We’re in our seventh week of fantasy play and…well…to be frank…Sally and Nic are kicking everyone’s asses. Both are undefeated so far this season. What’s interesting about their success has been that they’ve employed two different strategies: Nic drafted really, really well — their entire roster was set back in May and hasn’t changed since — while Sally stays on top of WNBA games and stats and picks up free agents as her roster needs them. Both their performances have been admirable.

Overseas commitments meant that some players that were drafted — like Dallas’ Satou Sabally or Chicago’s Kahleah Cooper — couldn’t contribute to fantasy scores for the first few weeks of the season, leaving team managers (myself included) with a quandary: dump the player for someone who could contribute right away or put the player on the bench and pray that they make amends later in the season? Also, COVID continues to be a fickle, fickle beast: Breanna Stewart, Sue Bird and Natasha Cloud are just a few of the players that have been sidelined this season by the pandemic. For someone, like me, who’s never participated in this kind of fantasy league, it’s been a real learning experience.

Want a peak inside our fantasy league? Here’s a look at the league’s rosters, as of Friday evening. 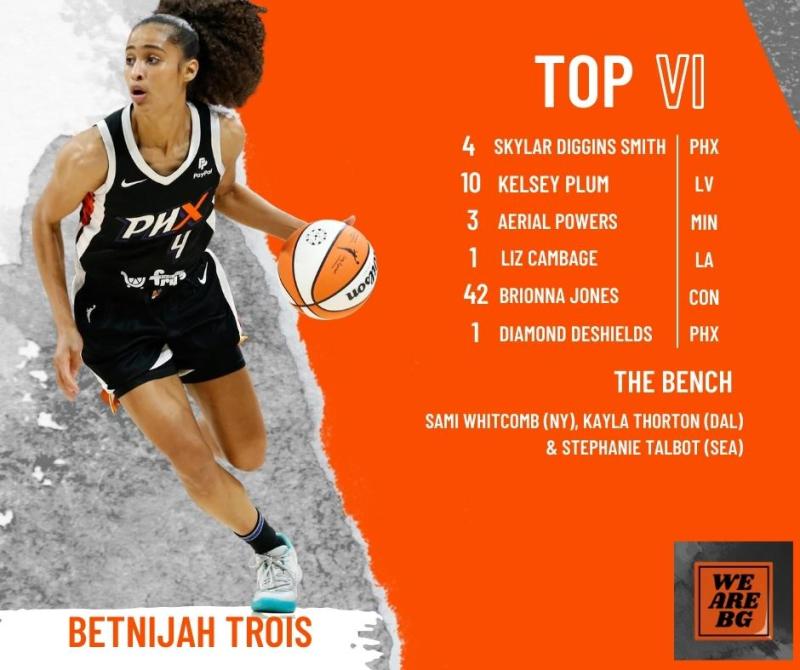 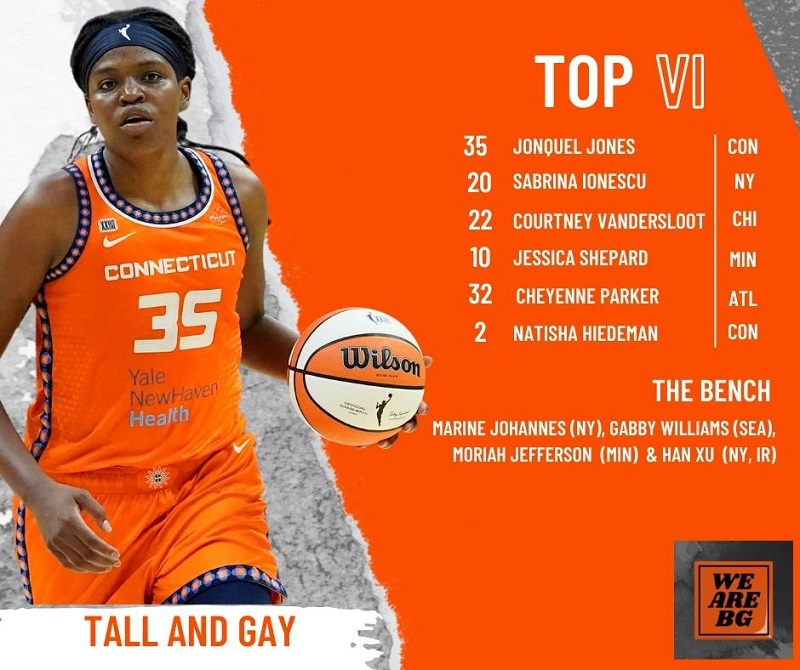 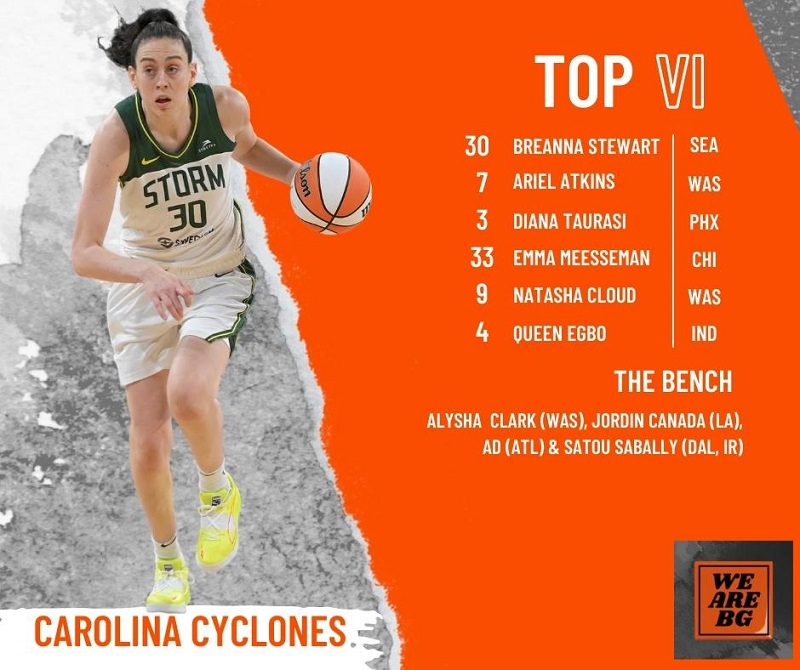 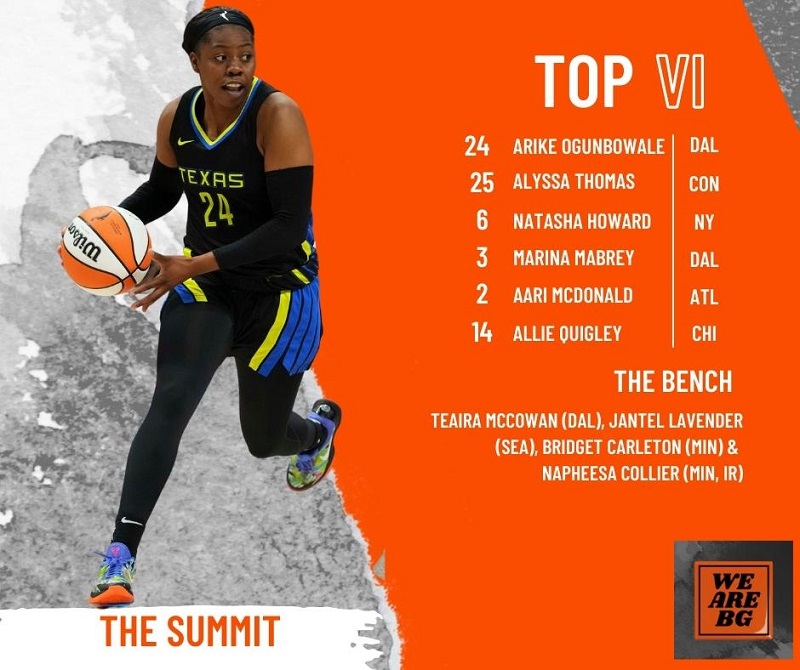 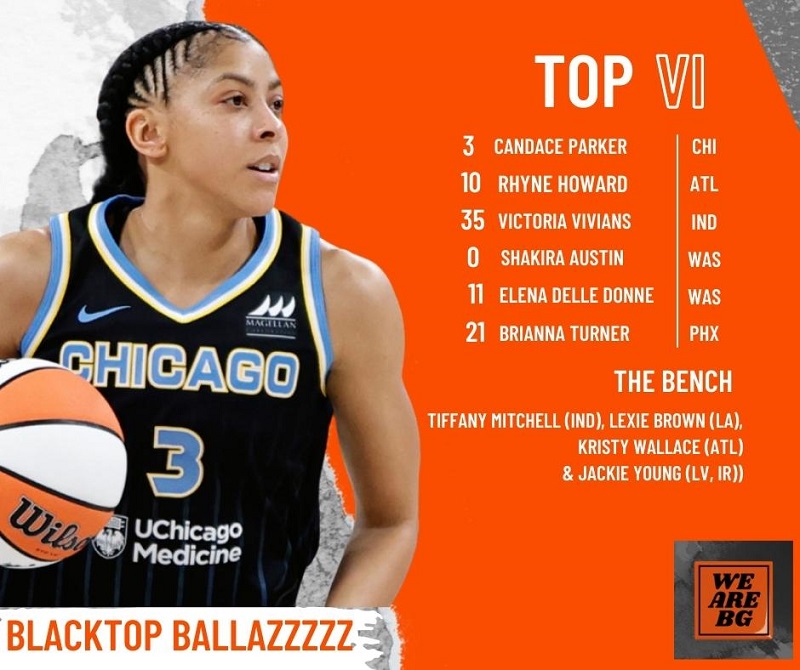 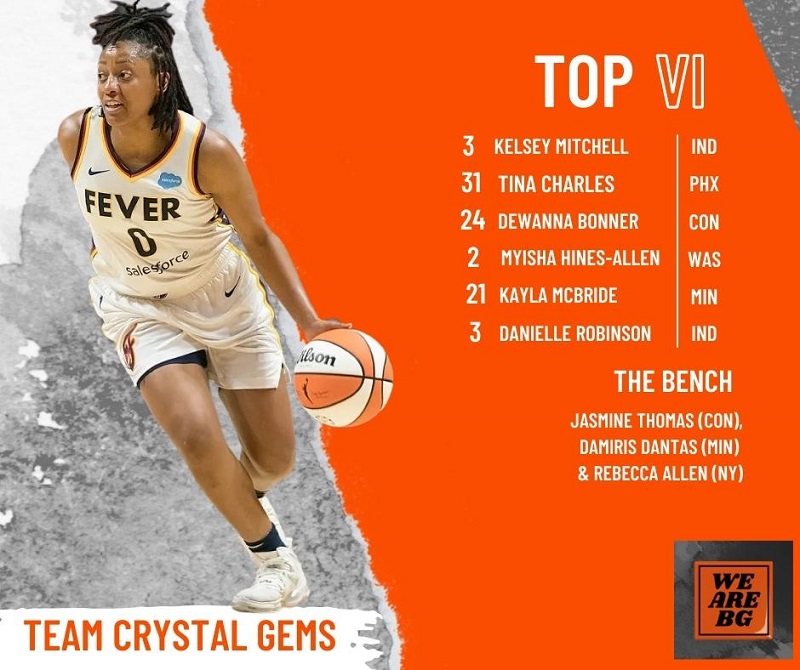 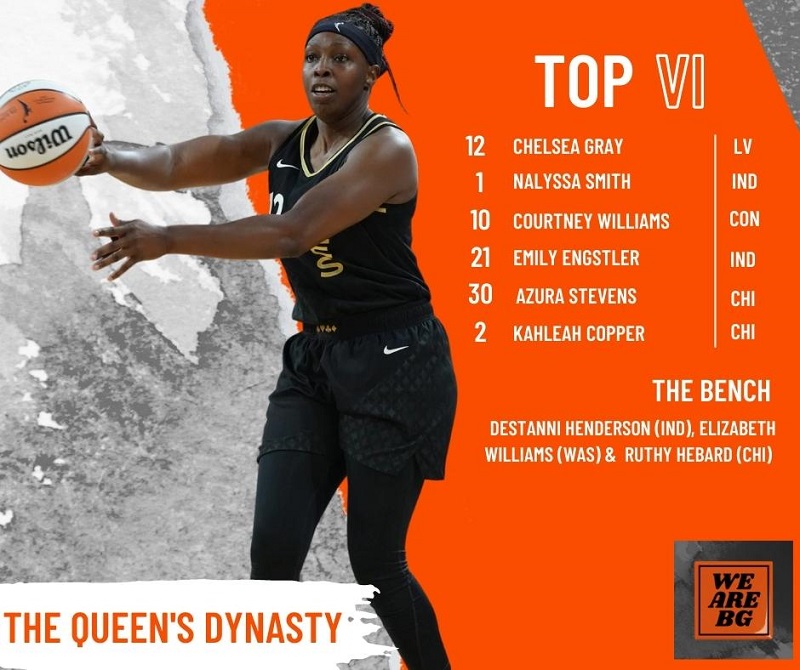 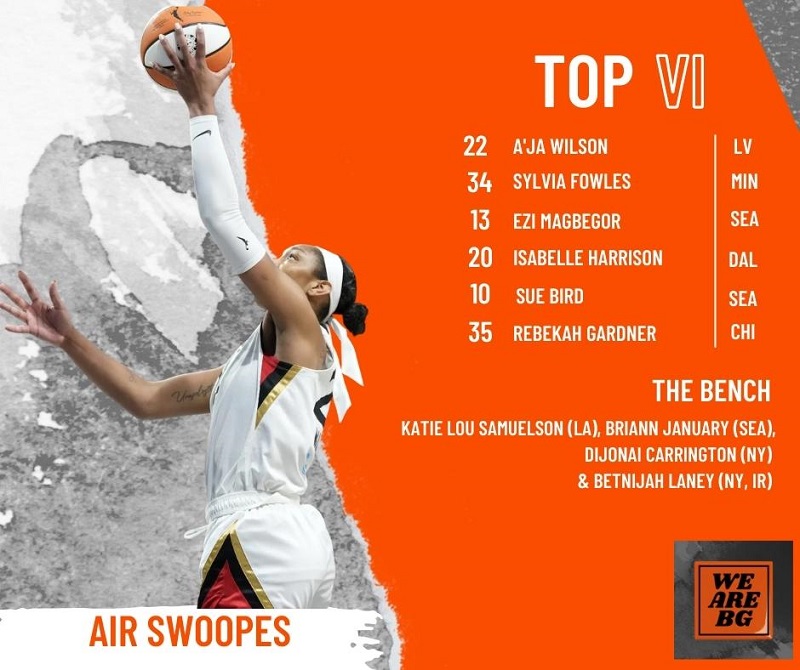 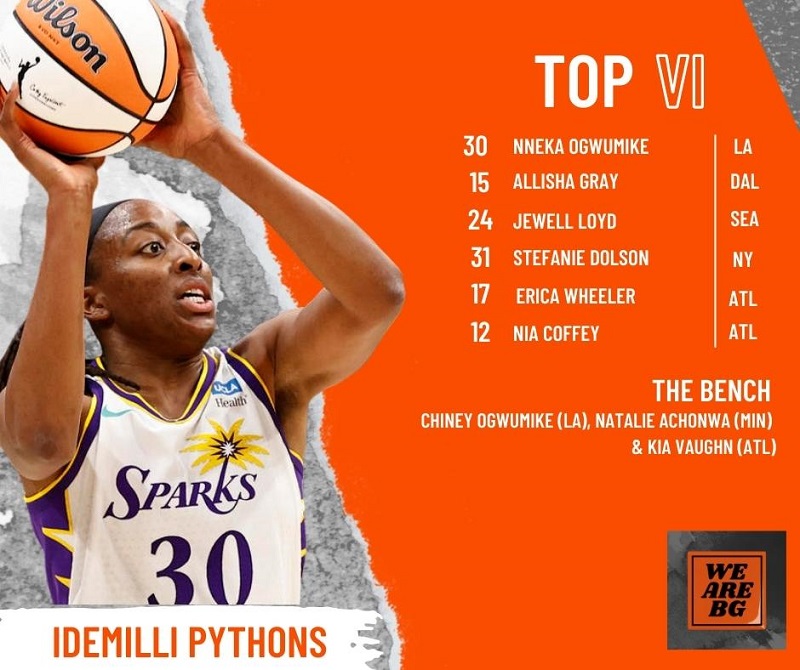 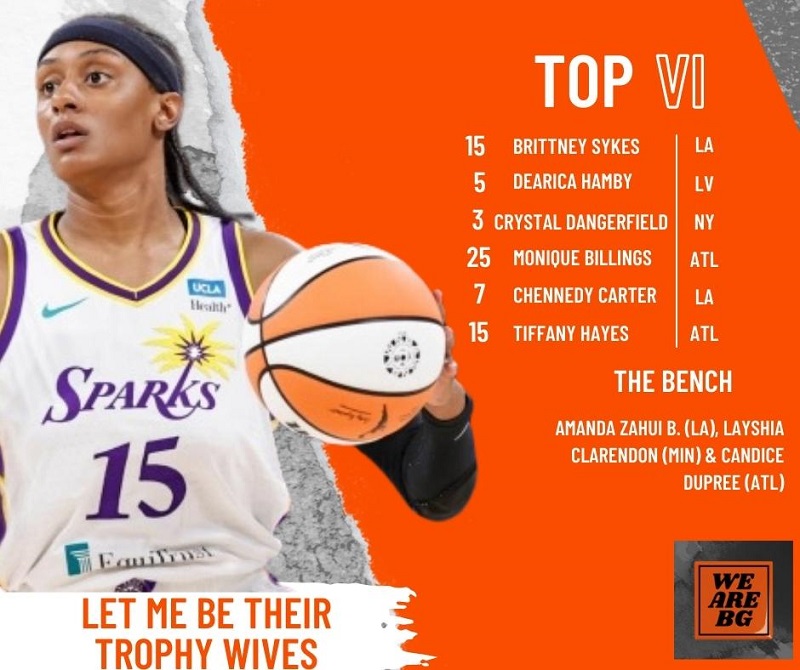 We’re almost halfway through the WNBA season but there’s plenty of basketball yet to be played. Can anyone break Nic and Sally’s unbeaten streak? Will Carmen ever forgive shea for drafting Candace Parker before she could get the chance? Will Satou Sabally return from injury to give the Carolina Cyclones the boost they need heading into the final stretch? Will Napheesa Collier pull a Candace Parker and return from maternity leave this season to bolster The Summitt? Will the new coach in Los Angeles build a team that’ll allow to the Ogwumike sisters — and the Idemilli Pythons — to dominate? So many questions left to be answered…I can’t wait to see how the season and our fantasy league shakes out.

Are you playing WNBA Fantasy? How’s it going?