Yes! Now I can talk about my favorite topic, Symbolic Annihilation, or the “absence of representation in the media.” Sociologist Tuchman divided the concept into three aspects: omission, trivialization and condemnation. In 1991, Larry Gross’s essay “Out of the Mainstream: Sexual Minorities and the Mass Media,” applied this specifically to gay people: “The gender system is supported by the mass media treatment of sexual minorities. They are ignored or denied – symbolically annihilated … of all social groups (except perhaps communists) we are probably the least permitted to speak for ourselves in the mass media.”

Furthermore, “representation in the mediated ‘reality’ of our mass culture is in itself power … when groups or perspectives do attain visibility, the manner of that representation will itself reflect the biases and interests of those elites who define the public agenda.”

There are a lot of people who will never respond to our anger, our rallies, or even to our straightforward pleas for empathy & understanding—the only way to reach many of these people is through media visibility and responsible representation.

The sad truth is most people are ignorant and don’t pay much attention to political nuance, or to questioning indoctrinated religious ideals and right-wing propaganda. Furthermore, I suspect a lot more stalwart hearts & minds were changed by Portia being on Ellen than by any PSA or rally.

There are a lot of people who will never respond to our anger, our rallies, or even to our straightforward pleas for empathy & understanding—the only way to reach many of these people is through media visibility and responsible representation.

This doesn’t have to be a compromise, because I don’t think there’s anything about our stories or our art that’s inherently distasteful to anyone, or inherently “fringe,” and I think it’s possible we can tell our stories honestly and be heard on a mass level without sacrificing our queer sensibility or community solidarity. Outsider voices are always where the interesting and exciting stuff is happening anyhow.

We need to be seen and it needs to be GOOD. TV shows, movies and also in the news—people need to know stories like this one are happening. As lesbians this is particularly important—and difficult—we struggle against sexism and homophobia and the patriarchy, and many of us also must contend with racism. 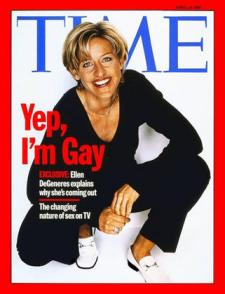 Gay men are further along than we are w/r/t media visibility, I think, and part of that is ‘cause men are conditioned socially to believe they are worthy and powerful, and that’s how despite our society’s aversion to the perceived threat on masculinity posed by homosexual men, when it comes to business deals and big media, they’ve still been able to get things like Will&Grace and we got um … um. A few eps of The O.C.?

We’re worth it, we must believe that we are worth it. We must fight hard for the social and cultural capital that will get us into the political arena, we must never give up on that.

When people feel they are seen, or feel they have allies or women they can relate to, they will feel more comfortable coming out to their families and friends. Then change will really begin. We will turn far-away faces into human face-to-face faces!

“An oppositional strategy is the subversion and appropriation of mainstream media, as well as the occasionally successful infiltration … the ultimate expression of independence for a minority audience struggling to free itself from the dominant culture’s hegemony is to become the creators and not merely the consumers of media images.”

So, the question: What is the biggest thing that needs to change in order the LGBTQ community to achieve equality, including in marriage??

Eeeeeks! I am going to talk a bit crazy now, a bit broad and abstract-y. Bear with me. An overhaul/realignment of the “value” system in the US is necessary. There is an urgent need to stop(!) policing sex, proscribing gender, and regulating sexuality; we need to delink religion and policy; our policies should be based on equality, respect for diversity/differing realities and experiences.

A changing of public sentiment toward gender and sex must happen. How? This is the question. I suppose the answer lies somewhere in the realms of education, media, visibility, and representation.

I think education and media are key: this is how minds change. The older generations can play a huge role, too.

Hey parents, grandparents: stop teaching hate and discrimination. Let people be…people. Full and whole. Teach love and acceptance, even if you disagree or dislike. It is not your place to police others’ lives (this is what Jesus would want, I am sure of it …in fact, I am sure that religion, by definition, preaches the “be nice, don’t judge” doctrine. No? Also, trust in younger generations is important-we all have things to learn from one another.

So, the big picture: shifting public perception. Also, though, I imagine specific interventions are useful: securing the right to marry, removing “the don’t ask don’t tell” policy, teaching sex education in schools from a non-heteronormative stance…

It is here that Obama and US government representatives need to step the FUCK up!

I don’t want to appear like an ungrateful Gen Y-er, but I think my country (Australia) would be closer to achieving equality if younger people were able to take on more prominent positions in the parliament and the media.

My country is still being run by Baby Boomers who are set in their conservative ways, and said ways do not favour unicorn concepts like gay rights…

My country is still being run by Baby Boomers who are set in their conservative ways, and said ways do not favour unicorn concepts like gay rights or same-sex marriage or civil unions etc. So I guess Gen X needs to start rising up and creating change, ‘cause it’s my belief that the public would be open to it. In saying this, Australia has a habit of blindly following the USA’s footsteps and so the more cynical side of me sometimes feels like we won’t see equality until it is achieved in the USA first. But we’ll see. My country often surprises me and I hope it keeps doing so in all of the good ways.