Tonight, the NCAA women’s tournament kicks off their Final Four on ESPN. Stanford and South Carolina will tip off first. It’s tough to know who will come out on top, these teams are so well-matched.

South Carolina’s playing their best basketball of the year at exactly the right moment, with Aliyah Boston anchoring their offense in the post. Their defense has been stellar all tournament long — they held Texas scoreless in the fourth quarter in the Elite 8 — and can bring their brand of physicality to tonight’s game, I give the Gamecocks the edge.

But don’t count out the Cardinal: they play true team basketball and, on any given night, anyone can step up and lead them to victory. They’re no slouches on defense either, ranking second in the country in FG percentage defense, so we could be in for a defensive slugfest tonight. The thing I like about Stanford is their ability to shoot the ball from three, averaging 38.3% from long range this season. If they can get going from behind the arc, Stanford could win this thing handily.

I’m truly torn: my head’s with Stanford, my heart’s with South Carolina. We’ll see what happens.

The nightcap’s going to be a fun match-up as well: UCONN vs. Arizona. It’s hard not to think the Huskies have the advantage going in: they are, after all, perennial national championship contenders and that have been on this stage 21 times before (compared to just once for Arizona). But I like an underdog…and this Arizona team’s coming into this game with a chip on their shoulder and absolutely nothing to lose. I like what the Wildcats can do from three and, if they can draw the UCONN posts into some foul trouble, we might have and upset on our hands.

But while we get excited for the women’s games tonight, we’ve got our own bit of March Madness business to handle. Over the last 48 hours, you’ve cast your ballots and winnowed the 32 remaining couples down to 16. Here’s how things look for the CANON VS. FANON Sweet 16: 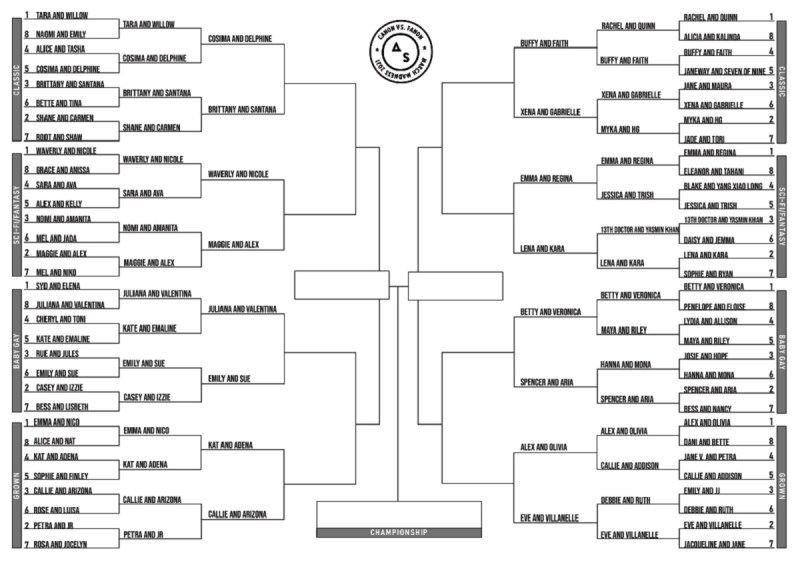 In the Classic sub-region, the canon battle between Tara and Willow and Cosima and Delphine was one of the closest contests of the tournament thus far. The lead volleyed back and forth multiple times over the past 48 hours but ultimately the couple from Orphan Black pulled it own.

Meanwhile, Brittany and Santana coasted to a relatively easy win against the L Word powerhouse, Shane and Carmen. The win isn’t entirely unexpected — we do love Brittana around these parts after all — but the announcement of GLAAD’s upcoming tribute to Naya Rivera and news of her final role in the upcoming animated Batman movie….well, that’s enough to provoke a lot of nostalgia for even the non-GLEEks among us. 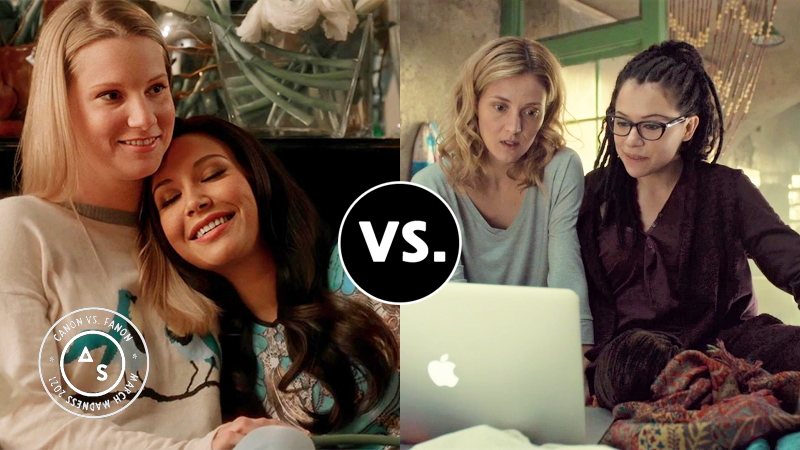 Over on the fanon side of the bracket, things shook out a little differently: both Buffy the Vampire Slayer and Xena: Warrior Princess easily fended off challenges in the Round of 32. Apparently, GLEE nostalgia doesn’t extend to everyone. 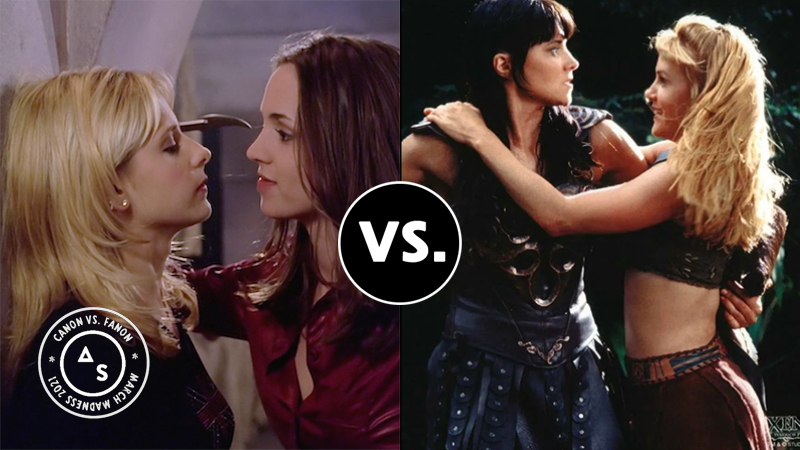 The canon side of the GROWN sub-region offered some of the toughest choices in this tournament: Emma and Nico or Kat and Adena and Petra and JR or Callie and Arizona? I thought it interesting that voters went with the “older” couples in both cases: Emma and Nico got together on Vida during its second season in 2019, while Kat and Adena connected during The Bold Type‘s first season in 2017. Callie Torres first met Arizona Robbins in the bathroom at Joe’s during Grey’s fifth season (2009), while Petra didn’t hire JR to defend her until until 2018. We’ll see if that trend holds in this final match of the sub-region. 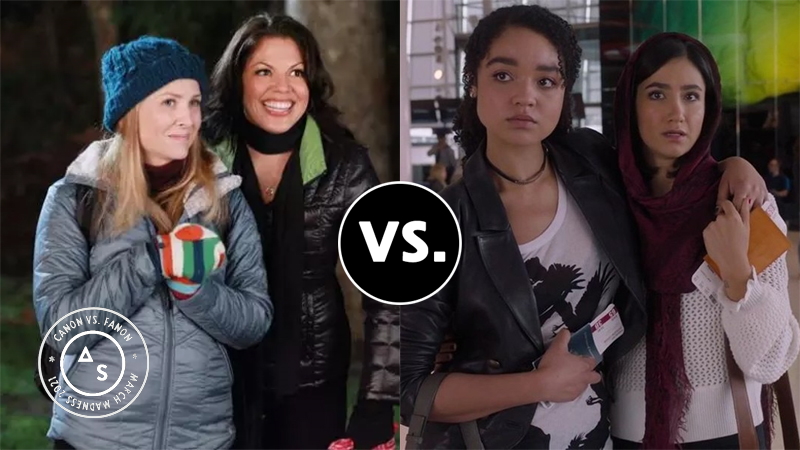 Our other most competitive match-up of the second round came in the Grown fanon sub-region. After battling back and forth, Alex and Olivia edged out Callie and Addison. Admittedly, I’m surprised that the Callie Torres love didn’t carry over from canon to fanon, but I’m chalking it up to the inescapable advertising for the Benson and Stabler Law and Order reunion. Personally, if Alex Cabot isn’t involved, I am not interested.

The Special Victims Unit team will meet Eve and Villanelle in their Sweet 16 match-up. The Killing Eve pair easily dispatched a challenge from the Gorgeous Ladies of Wrestling to make it to the third round. 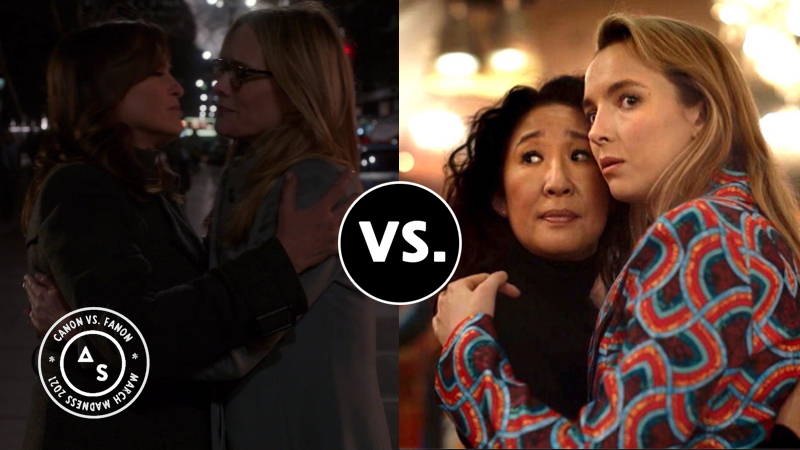 In the battle of the former March Madness champions in the Baby Gay region, Juliana and Valentina of Amar a Muerte came out on top. The fandom is definitely proving themselves stronger than their #8 seeding. They’ll face Emily and Sue from Dickinson in the Sweet 16, who pulled off what I’d consider to be a bit of an upset by dispatching Casey and Izzie. I guess that long wait between Atypical seasons — the show just started shooting its fourth and final season — took some wind out of the sails of the fandom. 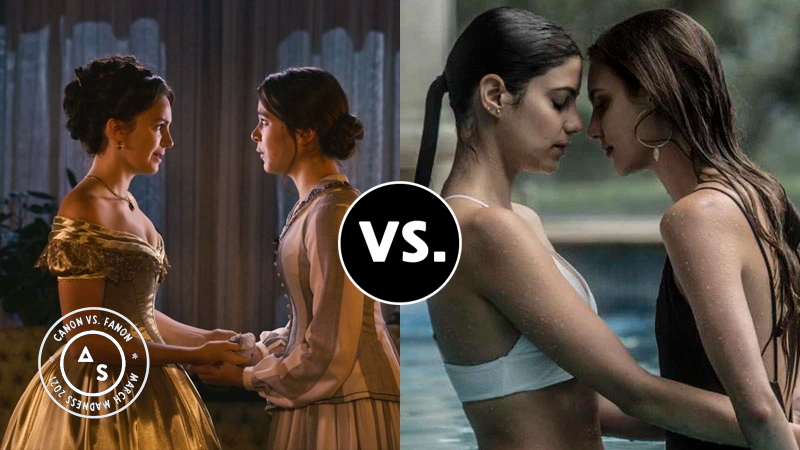 Over on the fanon side of the bracket, Betty and Veronica of Riverdale continued their dominance, despite an incredibly strong showing by Maya and Riley of Girl Meets World. The battle between the top two Pretty Little Liars fanon ships was closer than I’d anticipate with Spencer and Aria eeking out a victory. That makes for an interesting match-up in the sub-region’s finals: which fanon couple from a murderous town will reign supreme? Who’s your money on: Riverdale or Rosewood? 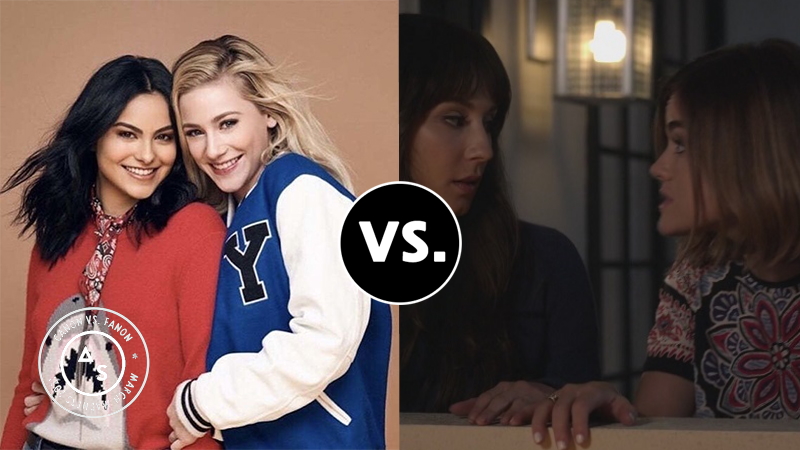 It’s been all chalk — that is, all the higher seeds have won — and the trend continued during the Round of 32 in the Sci-Fi/Fantasy category.Wynonna Earp‘s Waverly and Nicole easily defeated AvaLance from Legends of Tomorrow. With each round, WayHaught seems to be picking up strength so I like the couple’s chances as we head into the final rounds of this tournament. Standing in their way, though, will be the equally strong pairing of Alex Danvers and Maggie Sawyer, who advanced to the Sweet 16 despite a formidable challenge from Nomi and Amanita from Sense8. 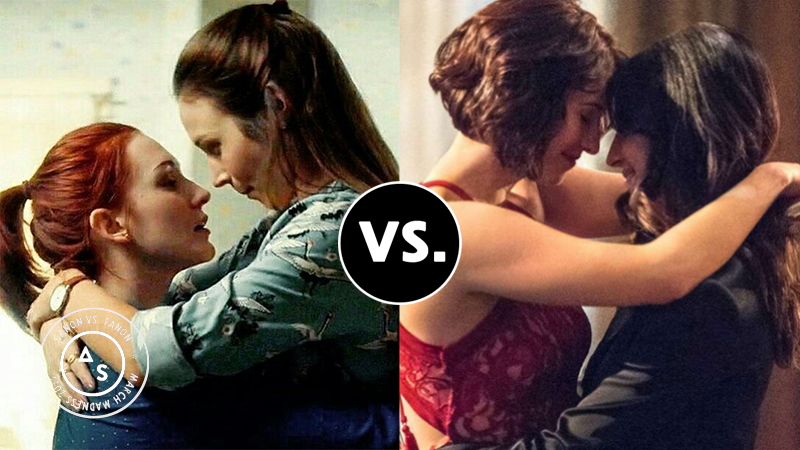 Let’s be honest: we all knew it was going to end here. No matter how many great couples there were in the fanon portion of the Sci-Fi/Fantasy sub-region, this final match-up felt inevitable: Emma and Regina vs. Lena and Kara. Swan Queen vs. SuperCorp. Both easily dispatched their opponents in the last round, ultimately earning almost the exact same vote totals. This will be the match to watch in the Sweet 16. 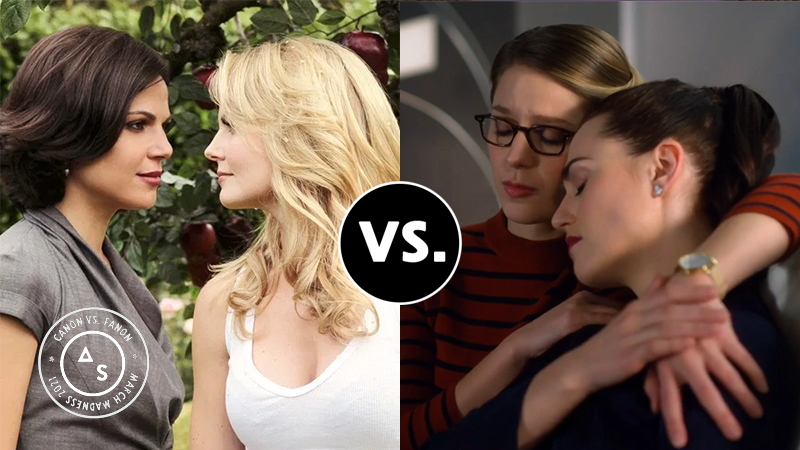