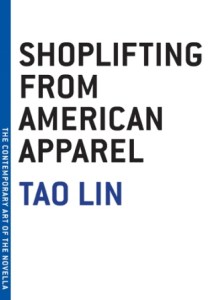 I just finished reading all 102 pages of Shoplifting from American Apparel by Tao Lin. Other books I’ve read by Tao Lin include his poetry you are a little bit happier than i am (which I reviewed on my blog Autowin) and the first 10-15 pages of his novel Eeeee Eee Eeee

. I was at page 115 of his short story collection Bed, which I think is really good, when I got Shoplifting From American Apparel in the mail and decided to read it.

What happened in this book? The description in Shoplifting From American Apparel‘s press packet avoids nailing down plot points. Instead, it names settings (Atlantic City, NYC, Gainsville, Florida and the post-post-modern “location” of Gmail Chat) and specific locations (‘VIP rooms in hip Clubs,’ the NYU Library, central booking in Chinatown); identifies themes (the “unidirectional nature of time rendering everything beautiful and sad,” “class, culture and the arts”) and attitudes (‘funny, journalistic, ‘existentially-minded’); and quotes Tao Lin’s own evaluation of the book as, “2 parts shoplifting arrest, 5 parts vague relationship issues.” It’s about a guy named ‘Sam’ who is clearly ‘Tao Lin.’

Once I was ‘arguing’ with Autostradle COO Brooke about the “added value” of publishing a “Lady Gaga-Related Dress of Guns Conspiracy Theory” short story that I’d written in collaboration with Internicaine Katrina Casino, Intern Hot Laura and Intern Emily Choo on Autostraddle as a ‘Daily Fix’ between the hours of 3 AM and 6 AM and then taking it down and somehow I chose to cite Tao Lin’s declaration on Bookslut that he was writing a novel called Statutory Rape starring Haley Joel Osment and Dakota Fanning* as evidence of the ‘acceptability’ of using Real Celebs in short stories and the ‘added value’ of ‘internet stunts’ in general** and she told me I’m not allowed to cite Tao Lin anymore as evidence of why I should do anything. I let Alex read the Lady Gaga story in an early incarnation and she said it was really bad and had been funnier when I’d explained it to her on the phone. I told my therapist about the story and she asked me if I was stoned.

[* according to HTML GIANT, when publishing pieces of the novel in lit-mag NOON, “NOON’s lawyer made [Tao] change [the names “Haley Joel Osment” and “Dakota Fanning”]–they were worried.”]

[** I also mentioned the works of Miranda July & Lydia Davis, who Brooke did not object to or seem interested in]

Nevertheless, I trekked from my room (where I am alone) to the living room (where Alex & Brooke are) to whine about this book review.

Me: I am so bad at writing book reviews, or writing movie reviews, theater reviews, art reviews, music reviews … I’m done with the book post except this book review.

Brooke: You know what, I think you spend too long on everything anyhow.

Alex: This is like that style post where you said you were so bad at writing about fashion & you didn’t know how and then it was like, completely awesome.

Me: That’s because I copied down 100 adjectives from fashion magazines while I was getting a pedicure because I think the problem is I don’t know enough adjectives, I need to have more adjectives at the front of my brain ready to be utilized.

Brooke: How do you do that?

Me: I don’t know, a workbook or something

[I forget some stuff we said here]

Me: … and then I read all these other book reviews online, which are mostly ‘negative’, and thought about how good all these book reviewers are, and how I’m jealous of their goodness and wished they worked for me, and how I think I am a ‘good writer’ but am bad at reviewing

Brooke: All the reviews are negative?

Me: Well I mean, ‘mostly’, like not negative but like, skeptical, anyhow I don’t think he cares, that’s not the point, I mean I think that’s what pisses critics off, that he genuinely believes all publicity is good publicity, he’s like really honest or something, or unashamed, like he’s fucking with you, which as you know is something I love like haha literary critics I made you read a 110 page book about thoughts I had in my head where nothing really ‘happens’ or haha I made you sit through a reading where I read “Tonight we ate a whale” over & over 40,000 times*, you know, like it’s a commentary on culture [I point at the three Andy Warhol posters on the wall in the living room], like Andy Warhol photocopied a bunch of soup cans and people bought it, Andy Warhol changed the world, like a commentary on pop culture, and Tao Lin is making a commentary on hipster culture/cyberculture, which I am obsessed with and therefore always impressed by his stunts/actions and then the books as secondary material**

[*exaggeration/misrepresentation to make Tao Lin seem ‘cooler’, in truth he read “the next night we ate whale” only 4,000 times]

[** His short story book, which’s more traditional format-wise, is amazingly solid however and I imagine critically ‘positively’ received. My ex-girlfriend also likes his short stories and she’s very tough to please, she only likes Elif Bautman and James Joyce.]

Brooke: But how successful can he be if doesn’t make any money, didn’t you say he had to sell his drawings on ebay?

Me: I thought that was cool that he did that

Brooke: I know you did, we can’t talk about this

Me: Well, he’s only 25 and he’s published four books, he’s really smart, and really good I think he makes  money maybe he’s not ‘good a money management’* but you know, he started his own publishing house, MuuMuu House. He owns that. And has a ‘sponsorship deal’ with Hipster Runoff.**

… and has a lot of interns

Brooke: So do you

Alex: Well, I know you think he’s like part of this ‘movement,’ and you can argue with me like about Rothko [nobody puts Rothko in a corner so i can’t transcribe the rest]…

Me: All I’ve written so far is, “my girlfriend would hate this book.”

Me: I think you would read four pages and throw it against the wall and yell something

Alex: Yeah, I would

Brooke: You should write that then, write what you just said to us

‘Everyone’ ‘should’ read Shoplifting from American Apparel, it’s short and tasty like a snack

sign up for our newsletter
Related:feminismmalinda loread a f-cking book