On Monday evening, approximately 200 people gathered in Washington Square Park for “Free Our Sisters, Free Ourselves,” a gathering to honor Black women and trans and gender non-conforming people who have been murdered by the police. As part of the 11 Days of Action called for by #ThisStopsToday, Free Our Sisters was held in solidarity with other protests against the Staten Island grand jury’s failure to indict officers in the killing of Eric Garner. Hosted by the Audre Lorde Project and several allied organizations (FIERCE, Streetwise and Safe, Sylvia Rivera Law Project, and Anti Violence Project), the event began with a large vigil and concluded with a tour of prominent sites of violence and resistance in the queer and trans struggle for prison abolition and police accountability.

In contrast with the vast and thundering NYC Millions March that originated from the same location just two days prior, Free Our Sisters was a reserved, community affair. At the start of the vigil, organizers gathered participants into a large circle, singing “we found love in a hopeless place.” Organizers discussed how that they had specifically chosen not to hold a march — rather, they wanted to give voice to resistance without risking members of the community being arrested, acknowledging that many in the space had survived violence.

“To be clear, we are not here to change the system. We are here to shut it down,” said Audre Lorde Project member Simone. “Audre Lorde reminds us that the master’s tools will never dismantle the master’s house. And in this moment, this struggle is not about bad cops. This struggle is about all cops. This is about transforming the system of oppression that created and sustained the prison-industrial complex. Let’s not forget that police forces were originally built to control and murder indigenous and Black people in this country… We’re socialized to turn to social workers and police when things happen, but we have resilience and resistance, strategies that have always worked for us. Let us rely on each other.”

“In the words of Audre Lorde, ‘we must fight knowing we were never meant to survive,” said Cara Page, Executive Director of the Audre Lorde Project. “We call upon the legacy of the Stonewall uprising. We call upon the legacy in the fight for our freedoms from the racist, homophobic, transphobic, classist, ableist, violent system. Tonight we will call out the names of some, not all — the ones that we know have been killed at the hands of the police, or from their neglect in upholding our safety. We cannot name all the names because often we are disappeared and not remembered.”

Following this, the group split into four sections where they received instructions to disperse, travel separately, and meet up flash-mob style in four locations around Greenwich Village: Stonewall Inn, the former Women’s House of Detention, the ICP Center, and outside of the old Barnes and Noble on the corner of 6th Ave and 8th Street. Once reassembled, participants were given a quick history lesson on the location’s relevance to the movement. 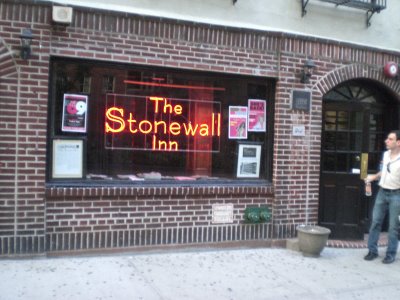 In 1969, the Stonewall Inn became the site of one of the most important protests in LGBT American history. On June 28 and 29, crowds fought against the then-common police raids of the bar. Although this fact is frequently erased, the Stonewall riots were led by trans women of color.

Today, Black queer women are still frequently uncredited, even as they lead some of the most high profile social justice actions around the country. This includes Alicia Garza, Patrisse Cullors, and Opal Tometi, the creators of #BlackLivesMatter.

From 1932 to 1971, the Women’s House of Detention was located in Greenwich Village. Many women were held here, including Angela Davis, who was incarcerated as a political prisoner for 18 months. (Later, she was cleared of all charges.) While inside the prison, Davis mobilized prisoners and initiated a bail program. When she left, Davis co-founded Critical Resistance, a grassroots prison abolition organization that popularized the term “prison-industrial complex.”

In 2006, seven Black lesbians were arrested for defending themselves outside the IFC Center movie theater. After 19-year-old Patreese Johnson turned down several raunchy advances by Dwayne Buckle, he called her anti-lesbian slurs and jumped on another member of the group, Renata Hill. The friends stepped in and successfully defended her.

Although the attacker never received any punishment within the criminal justice system, the women themselves were painted as “gang members” and criminalized. Three of the women entered into plea agreements and received six-months in prison. The remaining four received initial sentences ranging from three and a half to 11 years in prison.

Last May, Mark Carson, a black gay man, was murdered at the corner of 6th Ave and 8th street for simply walking on the street with another man. The killer, Elliot Morales, heckled the pair with anti-gay slurs, pulled out a gun and shot Carson to death.

To many, Carson’s death was particularly shocking because it had taken place in the middle of gay-friendly Greenwich Village. It brought to light a grim truth: for people who are both LGBT and Black, there are very few places of sanctuary.

For more, check out the Audre Lorde Project’s live tweets from the event at @audrelorde. They are also putting together a short documentary film.