This past weekend, tens of thousands of protesters participated in massive demonstrations all over the country to protest police brutality, an unjust legal system and systemic racism as made blatantly clear by the recent murders of Michael Brown, Eric Garner and Tamir Rice by police officers. About 30,000 people gathered at Washington Square Park in New York and marched to NYPD headquarters as part of Millions March NYC (organized by Synead Nichols and Umaara Elliott). In Washington D.C., tens of thousands of people showed up for the “Justice for All” march organized by Rev. Al Sharpton’s National Action Network. Protestors marched from Freedom Plaza along Pennsylvania Avenue to the National Mall where family members of Michael Brown, Eric Garner, Tamir Rice and Trayvon Martin spoke. In the Bay Area, thousands marched from Frank Ogawa Plaza to the Alameda County Courthouse. In Chicago, several hundred protesters gathered.

What follows is aggregated news reports and original reports from cities where we had reporters on the ground.

Tens of thousands protestors gathered at Washington Square Park and marched about four miles to NYPD headquarters to protest demand justice for victims for police violence. At the helm of the procession, the family members of Ramarley Graham and Kimani Gray carried a “Black Lives Matter” banner. Organizers of Millions March NYC called Dec. 13th a “Day of Anger” and hoped that “millions of people will go peacefully into the streets all over the country to disrupt business as usual, express their anger, and demand justice for victims of police violence and institutionalized racism.” They did just that.

“While it is definitely tragic we still have to march, there is something beautiful and hopeful about the fact that I am fighting for [my mom’s] freedom as much as mine, and we’re both out here so that my nephew, who just turned one, hopefully won’t have to march when he grows up,” Peebles said. “This moment transgresses time and in that sense this movement is beyond the individual; it’s truly for the whole collective.”

Peebles also marched with her “gaggle of diverse queer comrades, most of whom I traveled to Ferguson with and have been organizing around, talking, thinking, and crying about this movement with.”

“I realized today that through this work we have all grown together and grown closer together, which is such a privilege to have,” Peebles said. “As a QPOC and woman, it is really hard to find a comfortable and supportive space to do this work. I urge everyone to take this moment as an opportunity to either find their people or BUILD A QUEER/QPOC space within which they can mobilize and tackle the work of this movement. It will save your heart.” 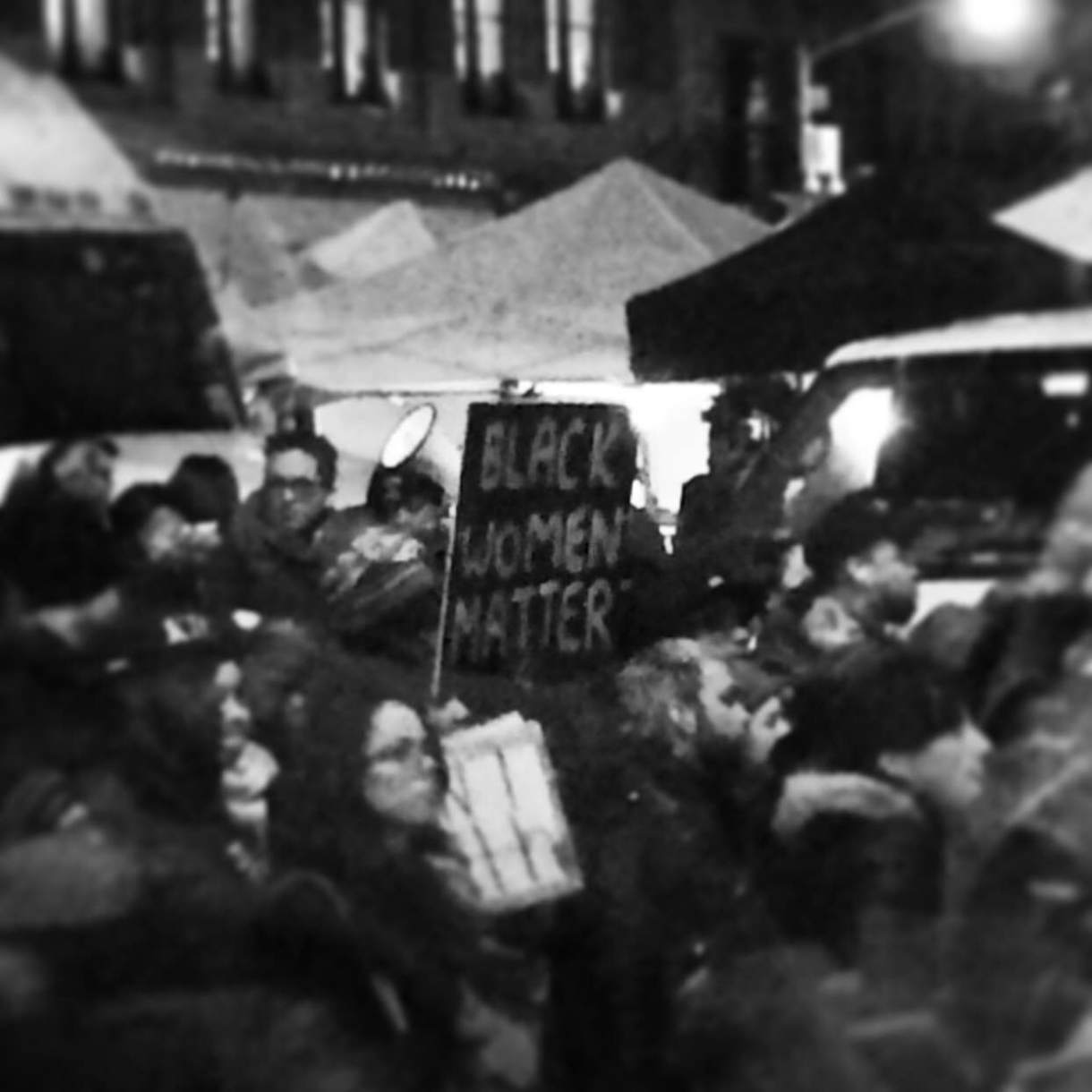 “I feel that now as we are finally getting to a point nationally and internationally of recognizing the significance of the #BlackLivesMatter movement we can now start highlighting and stressing that the majority of the people behind it, leading it and sustaining it since day one are Black women, including the people who came up with the hashtag [specifically: Alicia Garza, Patrisse Cullors and Opal Tometi]. From Ferguson to NYC, I have witnessed Black women at the front lines, willing and ready to make whatever sacrifices necessary (including that of their own lives) for this movement, one that unfortunately is focused mostly on the Black men who have been killed by police and not so much the women. Despite the question of whether or not we’d still be in the streets for a Black female victim, these women don’t  falter in their dedication. I hope that we can work harder to elevate this point, even if it’s just amongst our own community.”

‘How do you spell racist?” “U S A” By Laura Mandanas

We finally got to City Hall. By Laura Mandanas 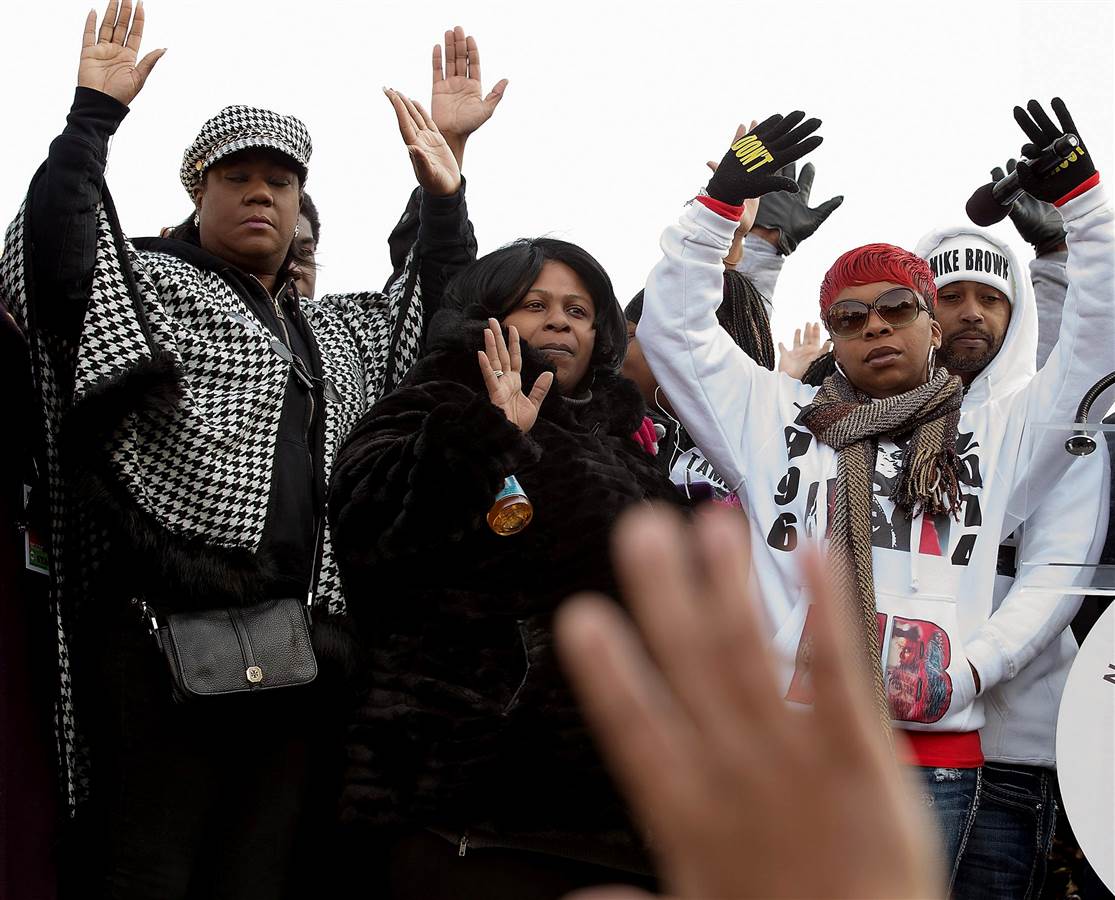 Thousands marched in D.C. with the families of police violence victims, including relatives of Michael Brown, Eric Garner, Tamir Rice, Akai Gurley and John Crawford, leading the march. The mothers of black men killed by police spoke at the rally including: Samara Rice, Tamir Rice’s mom; Sybrina Fulton, Trayvon Martin’s mom; Gwen Carr, Eric Garner’s mom; and Lesley McSpadden, Michael Brown’s mom and Kadiatou Diallo, Amadou Diallo’s mom. They thanked the protestors around the nation for showing up and making their voices heard and to keep fighting for justice.

“It is almost like you don’t need to say any words, you can just look out and see all of the people,” Lesley McSpadden told the protestors. “They shot our sons, but they did not die.”

Al Sharpton called for Congress to take action on police brutality at the rally. “We are not anti-police; we are anti-police-brutality,” Sharpton told protesters. “And today we challenge Congress to follow in the president’s footsteps and take legislative action to protect us, the citizens.”

Sharpton and the Justice for All March faced criticism from young activists and organizers in the days leading up to the march. The critic’s main concerns were that the march was clearly steering clear from looking like the revolutionary movement that began in Ferguson after Michael Brown was killed by police, while also benefitting from the attention.

Like The Root pointed out, these criticisms were proved to be true when a few young activists from Ferguson powered onto the stage after NAN officials denied them access. Apparently there was a VIP section and only those with passes were allowed on stage. You can see what went down in the video below. 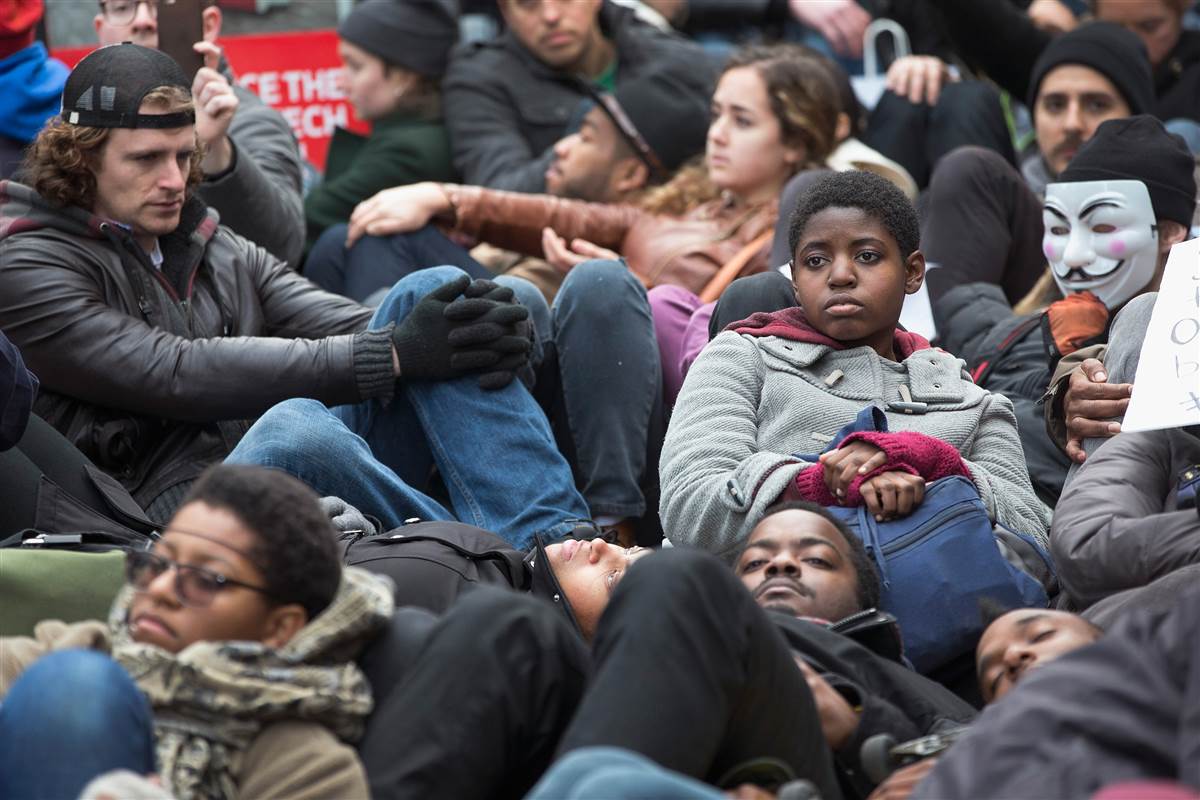 In Chicago, a couple hundred protestors gathered downtown in solidarity with the marches in NYC and Washington, D.C. They held a die-in along the Magnificent Mile, the city’s famous shopping area. The die-in shut down a portion of the sidewalk on the corner of Michigan Avenue and Chestnut, amidst a busy shopping day. Several protestors were arrested when they attempted to demonstrate inside of the Magnificent Mile’s Nordstrom store but police stopped them before they could make it inside. The march continued and ended at the Water Tower building where several people spoke. 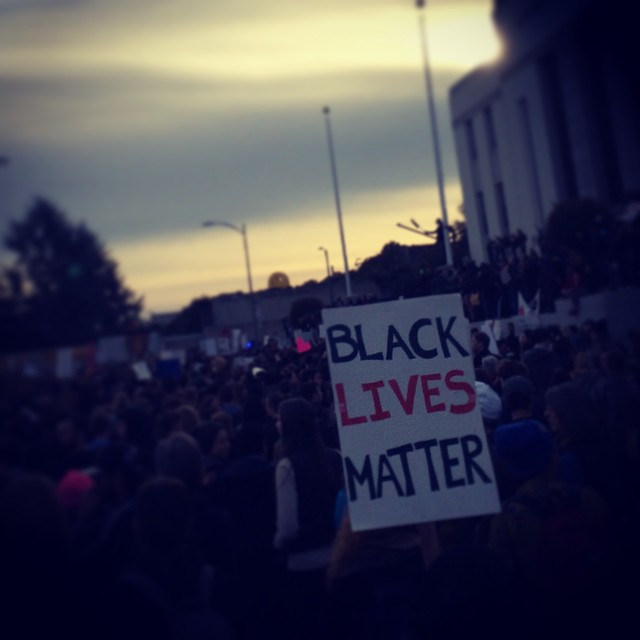 It had been a tumultuous few weeks leading up to Saturday’s march — a week prior, about 100 or so protesters in Berkeley (including me) had been tear gassed by police officers, unprompted by any violence or aggression from protesters. The officers had declared the gathering an “unlawful protest” and the tear gas was their way of clearing the streets, I guess. The only unruly activities happening were a few white male anarchists who kept knocking shit over and rolling tires into the street and yelling at and mocking anybody who questioned their methods or cleaned up their mess — including black people. On Sunday night I’d see a white male anarchist in a struggle with a young black man who was trying to stop the white anarchist from knocking over yet another trash can. I wasn’t surprised when one of those white men was outed as an undercover cop — at which point he pulled a gun on protesters. There is definitely a divide within the movement regarding whether or not vandalism and violence is a useful response and I’m not here to judge any PoC who advocate for it — regardless, the majority of protesters have been peaceful, despite what the news has been reporting. For white people the choice should be easy: don’t start shit without the go-ahead, leadership, invitation or support of black folks. Follow their lead and listen up.

Protests continued all week in Berkeley and Oakland. Highways were blocked off, demands were made, streets were marched on, support was gathered, a city council meeting was cancelled, BART stations got closed, stores were damaged, hundreds of people were arrested, high school students walked out of class, streets were taken over and we got used to hearing helicopters every night starting at 4pm. This movement was moving, and momentum was building in an unprecedented speed. The city, meanwhile, continued doing absolutely everything wrong.

For Saturday’s March, which was put together by community organizers including the Black OUT Collective, NoBusinessAsUsual (the organizers of Black Brunch) and UC-Berkeley’s Black Student Union, showed UP. Big time. Thousands of protesters came out for this.

The Oakland March congregated in Oscar Grant Plaza in downtown Oakland, where the main organizer went over some crucial rules for white allies — give the megaphone to a black person, if you’re interviewed by the news, direct them towards a black person. Make room for black people. Do not say “we can’t breathe,” do not say “all lives matter.” She then called all black folks to the front of the crowd. We listened to a few brief speeches — all of them galvanizing and fantastic and all of them from black women or women of color.

Then we marched to the Alameda County Superior Court, black people leading the crowd. The Berkeley group — reeling from that morning’s revelation that effigies had been hung throughout UC-Berkeley’s campus, which turned out to be a poorly-received action organized by a queer and POC artist collective — met the Oakland group at the courthouse. The crowd was inspirational and enormous and diverse — so many children, so many senior citizens, so many families. (Also, SO MANY LESBIANS.) All of the scheduled speakers again were black women, including Oscar Grant’s mother, Wanda Johnson. She told the crowd, “We want officers held accountable. We want officers to be able to feel the pain just as we feel it. We got to stand up to the police brutality in our nation.”

March organizers spoke about the importance of organization and seizing this moment to finally make a change. Any folks of color who had lost a loved one to state-sanctioned police violence was asked to come forward and speak, including a young man whose cousin, Amadou Diallo, had been shot 42 times by police in 1999 and killed. From where I was standing I couldn’t see the speakers and often necessary words were drowned out by the helicopters circling the sky, but the crowd was attentive and strong.

As a white person my takeaway from the event is that some really incredible groups of black activists are working on organizing a massive and transformative racial justice movement, often in solidarity with other people of color. So we (white people) will be there when they need us, step back when they don’t, and should do everything we can within our own communities to educate and inspire more activism.

After the march, some protesters continued protesting and others went to Oscar Grant Plaza for the Healing Stations and Legal Aide Stations set up for black folks by the march organizers.

I welcome corrections and additions in the comments as well as submissions or any testimonies from PoC who attended the Bay Area marches.