In keeping with their argument, Protect Marriage has expressed displeasure and apprehension through their spokesman, Gary Randall, who was quoted as saying “I believe there will certainly be harassment, and I pray to God there isn’t more than that.” Back on October 3, when the hearing with Judge Benjamin Settle originally occurred, Protect Marriage Washington posted the following on their website:

Amazingly, and in spite of hundreds of examples brought forward as evidence, McKenna’s attorney (Anne Egeler) continues to deny that any harassment whatsoever took place during the R-71 campaign. The AG’s strategy is to trivialize the many confrontations, threats, obscenity laced e-mails and phone calls that many of us on our side endured during the campaign, and to redefine clear examples of harassment as protected “political speech.” 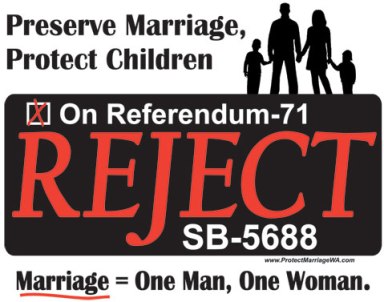 U.S. District Judge Benjamin Settle said in his ruling Monday morning that petitioners who advocated for privacy provided only a few experiences of indecent statements and other uncomfortable conversations. Also, there was only speculation that those incidents were connected to the issue, he said. If just a few instances of harassment were used as the standard for preventing the release of names, then disclosure would become the exception, rather than the rule, Settle said.

This is (sadly) reminiscent of some moments of the Proposition 8 trial, in which Protect Marriage tried to pull out more controversial (read: incompetent and damning) witnesses because they were ‘in danger of harassment,’ while apparently totally unaware of or indifferent to the actual harassment and violence that queer people have to legitimately fear. (For supplemental reading, see Peter LaBarbera, who when actually harassed this weekend because of his anti-gay views, upgraded it to a hate crime, thereby demonstrating a fundamental lack of understanding of the term ‘hate crime.’) 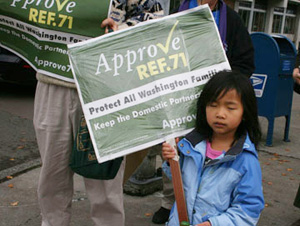