Hi there and welcome to our 35th Autostraddle Anonymous Sex Toy Review!

This week we’re going old school and reviewing a famed sex toy: The Rabbit! The newest version of this toy is actually called Rabbit Habit (though it was really difficult for our anonymous reviewer to remember that so she calls it “The Rabbit” throughout this entire review and apologizes for that but feels you will forgive her as you are kind forgiving humans) and it is part of Babeland’s Best 20th Anniversary Collection. The updated toy is also now both latex- and phthalate-free! 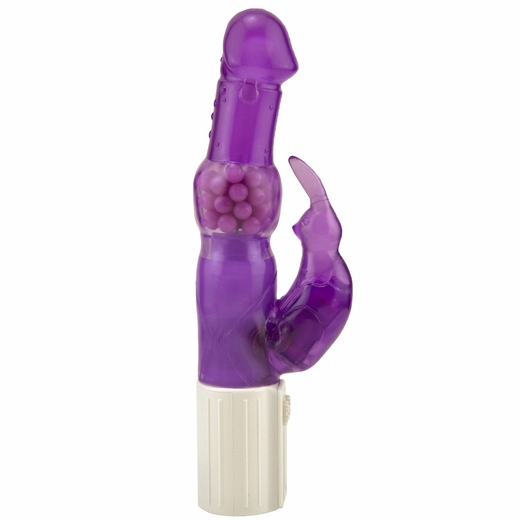 Honestly, for a long time I had sort of forgotten about The Rabbit.

I first learned about it via Sex and the City in an episode titled “The Turtle and the Hare” which apparently aired in 1998 but which I saw for the first time during my freshman year of college in 2006. I sat with my two best friends in their dorm room, in the same city the ubiquitous show was filmed in, and watched Charlotte, the supposedly prim but secretly kind of sexually adventurous character, get totally hooked on a vibrator. It was, of course, The Rabbit. Though my friends and I didn’t say anything to each other out loud, I think we all secretly knew we’d be buying our own Rabbits soon enough. A few months later, on Valentine’s Day, the three of us went to see The Vagina Monologues and then popped over to Babeland in SoHo, where we bought ourselves gifts to celebrate feminism, singledom, and sex. (Guys, why did it take me so long to figure out I’m gay?) We left the store with three brand spanking new Rabbits, two purple (for them) and one pink (for me). It felt like a victory.

I wasn’t out yet, even to myself, and I’d never had penetrative sex. The Rabbit’s whole schtick is that it provides penetration and clitoral stimulation, but to be honest I was sort of disappointed with it in the beginning. It was fine, but I wasn’t used to penetration and couldn’t make it feel good, and I felt like my hands did a better job on my clit than the toy did. When that original Rabbit broke a few years ago I never replaced it because I had never used it much in the first place.

Despite my early subpar experience, when I was offered a chance to review The Rabbit for Autostraddle, I never considered saying no. Even though I hadn’t had the sexiest time with the toy back in college, a lot of things have changed since then. For one, I’m now an out and proud dyke, and for another, I’ve learned that I love penetration, especially when it’s coupled with clit stimulation. Suddenly it seemed like this toy and I may be able to move past our problems.

Guys, I am so mad at myself for waiting so long to try this toy again.

Whatever my college self felt about The Rabbit, I would like to officially strike it from the record. The Rabbit is amazing. It is famous for a reason. It is beautiful and special and if it were a person I would buy it gifts and whisper sweet nothings in its ear because it deserves it and I wanna make it as happy as it makes me.

The only complaint I have about The Rabbit is that it’s pretty loud – I think I would be scared to use it if my roommates were home because even when you muffle it under the comforter, it’s still pretty obvious. I checked out the reviews of the toy on the Babeland website and the 100+ comments were very mixed; some people complained that the motor wasn’t strong enough (I like strong vibes and I thought it was perfect, for what it’s worth), some experienced the toy getting too hot or breaking after just a few uses, and some just felt it wasn’t shaped right for their bodies and didn’t actually do everything it aims to do. Still, for every lukewarm review there is a fiery red hot one, and I’ve got to add my opinion to the yespleaseneverstop side.

At $90 it’s not cheap, but it’s also not the most expensive in the world of sex toys, and for what it does I think it’s a great deal. As I said, a lot has changed since my freshman year of college, and I’m really glad I gave The Rabbit another try. I can tell that this time around, we’re going to have a really sexy special relationship.