Over the last few years, sex toy companies and stores have asked us to review their toys in exchange for, you know, their toys. Today we’re reviewing the PalmPower Extreme! 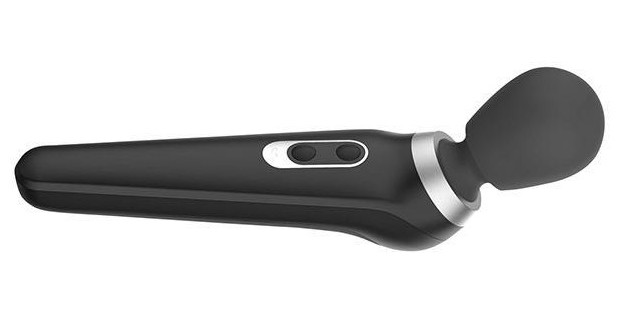 Not all wands are alike though. I know, as a fact, many of the readers on this gay website reach for The Magic Wand over and over again. And don’t get me wrong–there’s good reason!

However, The Magic Wand isn’t without critique. I have been yearning for a sleeker toy, something waterproof, a wand that doesn’t hurt my wrists and at times I want intensity without the rumble.

This is why I was intrigued by the PalmPower Extreme! This toy is shorter than the traditional wand, much lighter, rechargable, waterproof (not submersible, sorry bath babes) and it’s head sits at an angle making it great for solo and partner play. It comes in either a polished all-black design or an attractive black and hot pink look. Also, it’s $84 bucks at Early To Bed, which is a great price for a rechargeable wand.

Let’s start this review off with what matters: POWER. The PalmPower Extreme has two buttons, making it super easy to control–a power button and then a second button that can increase intensity and change patterns. Confusing buttons on vibrators is one of my pet peeves–as my partner knows every time I accidently switch The Magic Wand Rechargeable to a pattern instead of increasing the speed (which happens literally every time I’m using it). The ease of the PalmPower Extreme is a giant bonus for me.

The PalmPower brand allows users to control the intensity. You can hold the main button down and it starts at a low speed that gradually increases. This means you have more options than just the three or four speed settings most toys come with. The PalmPower Extreme is not as rumbly a toy as The Magic Wand, but it’s not an annoying buzz either. It’s intense. And my body loves it. The vibrations feel deep and powerful which is what I want from a wand toy.

The design of this toy is SMART. The handle of this toy is ABS plastic and silicone, meaning it’s easy to grip and hold onto, even with lubed-up fingers. The slightly flexible head allows for grinding and pressure. The thin handle and weight is a much needed breather from The Magic Wand. While this isn’t the lightest vibrator on the market, for folks thirsty for wand-style toys who experience wrist or arm pain, this could be a nice alternative. It’s not quite as loud as The Magic Wand either but don’t get your hopes up homosexuals, this is not a quiet toy.

The angle of the head of this toy! Is! Hot! Stuff! Such a subtle thing, yet it makes a huge difference in the use of this toy. It helps your wrists! It helps fit the toy between two bods! It helps for self-administering back massages in this time of social distancing! Hell, I’m using it on my neck literally while I’m writing this review.

The biggest con for me is that this toy isn’t submersible. I’m taking so many depression baths and I’d love to bring my new best friend in with me.

Overall though, this is a great toy for folks who want to try something similar to The Magic Wand but don’t want The Magic Wand. For Magic Wand aficionados: be warned this toy doesn’t have the same rumble! But what The PalmPower Extreme loses in rumble, it makes up in deep intensity and genius design and will be a welcome difference to anyone’s toy box.